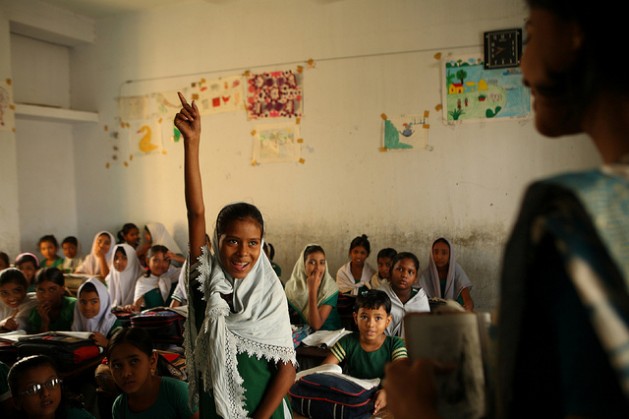 A student at the Hazi Ibrahim Government Primary School in Bangladesh’s capital, Dhaka, raises her hand in response to her teacher’s questions. Credit: Shafiqul Alam Kiron/IPS

UNITED NATIONS, Apr 10 2015 (IPS) - If you are reading this article, consider yourself one of the lucky ones; lucky enough to have received an education, or to be secure in the knowledge that your child will receive one. Lucky enough to be literate in a world where – more often than not – the ability to read and write can mean the difference between a decent life and abject poverty.

In the 15 years since the landmark World Education Forum in Senegal’s capital Dakar laid out six ambitious education targets agreed upon by 164 governments, a lot has changed.

“There are still 58 million children out of school globally and around 100 million children who do not complete primary education." -- UNESCO
For one thing, 34 million more children have attended school as a result of policies rolled out under the Education for All (EFA) initiative; the number of children out of school has been halved since the year 2000; and many countries have made great strides towards bringing as many girls into classrooms as boys.

But dig a little deeper and the good news gives way to a bleak reality. According to the most recent EFA Global Monitoring Report released Thursday by the United Nations Educational, Scientific and Cultural Organisation (UNESCO), “There are still 58 million children out of school globally and around 100 million children who do not complete primary education. Inequality in education has increased, with the poorest and most disadvantaged shouldering the heaviest burden.

Given the vast spectrum of cultures, economies and political ideologies represented by the 164 governments in Dakar in 2000, the six targets agreed upon reflected some of the most urgent and universal challenges facing the world today: early childhood education and care; universal primary education; youth and adult skills; adult literacy; gender equality; and the quality of education.

Although the pre-primary school enrolment rate has improved by two-thirds since 1999, and the primary net enrolment rate is set to reach 93 percent by the end of the year, the fact remains that one in six children in low or middle-income countries – roughly one million kids in total – will not be in school at the time of the 2015 deadline.

Only 69 percent of countries studied will have achieved gender parity at the primary level by 2015, a number that falls to just 48 percent for secondary education. Although governments agreed in 2000 to halve the global illiteracy rate by 2015, a four-percent reduction is all that has so far been achieved.

Katie Malouf Bous, a policy advisor for Oxfam International based in Washington DC, told IPS the results of the monitoring report showed “a mixed bag, very uneven across different countries.”

She stressed that the widening of inequalities in education access and outcomes was a worrying trend, adding that there is an urgent need to “redouble investments in public education and make sure those investments are being targeted at the right communities and children.”

According to a March 2015 UNESCO policy paper, “The annual total cost of achieving universal pre-primary, primary and lower secondary education in low and lower-middle income countries is projected to increase from 100 billion dollars in 2012 to 239 billion dollars, on average, between 2015 and 2030.”

The policy brief went on to say that “the total annual financing gap between available domestic resources and the amount necessary to reach the new education targets is projected to average 22 billion dollars between 2015 and 2030.”

This funding gap proves that most governments are failing to allocate the required 20 percent of national budgets, or four percent of annual gross national product (GNP), on education.

Asia-Pacific: Is the region pulling its weight?

According to Oxfam’s Bous, “One of the things we’re really worried about is the trend we see of the state pushing some of its responsibilities on to the private sector, and focusing on low-cost private schools or public-private partnerships to deliver education.”

“We believe this is only deepening educational inequalities, particularly in the Asia region, where a lot of donor-driven initiatives are supporting low-cost private schools, which are basically profit-making schools that charge fees from poorer families […],” she explained.

Home to four of the world’s six billion people, the Asia-Pacific region is rife with inequality, a situation that will only worsen unless governments take the necessary steps to educate this massive population. Currently, one-third of all students between six and 18 years of age in South Asia attend private rather than public schools.

A 2015 study by the United Nations Children’s Fund (UNICEF) revealed that over 40 percent of all out-of-school adolescents live in South Asia, with Pakistan alone accounting for one-half of that figure.

In a 2014 regional report tracking progress on Education for All, UNESCO noted that five of the so-called E-9 countries, defined as the world’s most populous developing nations, were in Asia: Bangladesh, China, India, Indonesia, and Pakistan.

While these states have made great strides in bringing children into the classrooms, they account for millions of out-of-school youth, most of whom will never receive a proper education.

This has major implications for the economic health of the entire region, which already hosts 64 percent of the world’s illiterate adults – roughly 497 million people as of 2014.

While 10 countries in the region have achieved universal (99 percent or more) participation in primary education, with nine countries on track to achieve the goal by the end of the year according to UNESCO, survival rates remain a challenge, with nations like Bangladesh, Cambodia, Lao PDR, Myanmar, Nepal, Pakistan and the Solomon Islands experiencing difficulty in retaining students up until the last year of primary school, let alone ensuring that they will enroll in – or complete – a secondary education.

As the U.N. moves closer to finalising its Sustainable Development Goals (SDGs), education experts around the world are pushing urgently for policies that direct all necessary funds, energy and action into the classrooms – where the futures of many developing nations will either be made or broken in the coming decade.