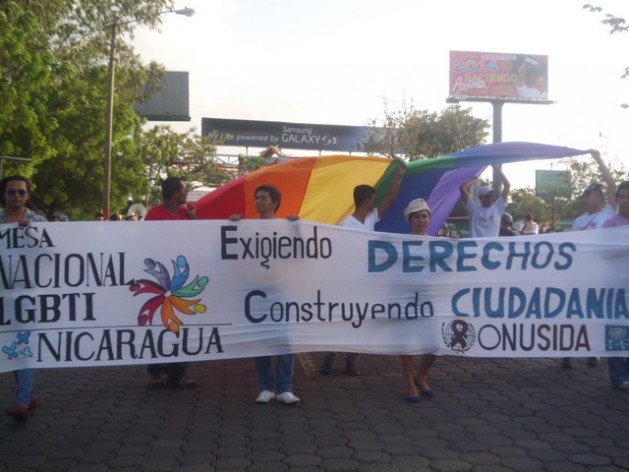 One of the many protests held in 2014 by sexual diversity activists and organisations demanding recognition of the right of lesbians, gays, bisexuals and trans persons to marry and adopt, which was not included in the new Family Code. Credit: Courtesy of the Sustainable Development Network of Nicaragua

MANAGUA, Apr 29 2015 (IPS) - A new Family Code that went into effect in Nicaragua this month represents an overall improvement in terms of the rights of Nicaraguans. However, it has one major gap: it fails to recognise same-sex marriage, and as a result it closes the doors to adoption by gay couples.

Organisations that defend the rights of lesbians, gays, bisexuals, trans and intersex persons (LGBTI) fought to the end without success to get the new Code – Law 870 – to include the right of gay couples to marry and adopt children.

Marvin Mayorga, an activist with the Urgent Actions Against Discrimination for Sexual Orientation and Gender Identity Project in Nicaragua, told IPS that the law is discriminatory.

“The lack of recognition of gay marriage forces us to formally remain single, and single people are not legally allowed to adopt children in this country and establish a family,” he said.

“The lack of recognition of gay marriage forces us to formally remain single, and single people are not legally allowed to adopt children in this country and establish a family.” -- Marvin Mayorga

“And outside the family there are more barriers to achieving minimal guarantees and benefits like decent work, social security coverage, education, healthcare and housing,” he complained.

The activist stressed that “families in Nicaragua are diverse, but they want to impose one single model of what a family is.”

The new Code, approved by the legislature in 2014, finally entered into force on Apr. 8.

Its aim is to protect the rights of each member of the family as well as enforce the collective rights and obligations of families.

The driving force behind the drafting of the new Code, lawmaker Carlos Emilio López of the governing left-wing Sandinista National Liberation Front (FSLN), told IPS that the 674-article Code updates and brings together in one legal instrument what was previously dispersed in 47 different laws and regulations.

The new Code addresses questions such as marriage, property rights, adoption, retirement, the rights of mothers, fathers and children, divorce, alimony and paternal and maternal responsibility.

Up to now, family questions were mainly included in the 1904 Civil Code, which according to López regulated these issues with a strongly conservative and Catholic tint, which subordinated women and children to the father as the breadwinner of the family.

“A careful analysis was made so that each member of society, as individuals that form part of families, had clear rights, obligations and duties in keeping with the country’s constitution and laws, so that there would be no discrimination against anyone for any reason,” he said.

López argued that there is no discrimination against the LGBTI community because the Nicaraguan constitution, which is above the new Code, protects the right of all Nicaraguans, and provides guarantees against inequality.

But Luis Torres, head of the local NGO Nicaraguan Sexual Diversity Alternative, told IPS that the new Code does discriminate against LGBTI persons by excluding them from the right to marry and forcing the state to provide social benefits only to family units recognised as such by the new Code.

“It’s a step backwards,” he complained. “Through the Code, the state excludes cohabiting same-sex couples from social security coverage. Neither marriage nor civil union between people of the same sex are recognised.”

That means in practice that “LGBTI couples do not have access to related rights like the right to a family loan, to adopt children, or to obtain social security coverage in case of the death or injury of a spouse, among other rights enjoyed by heterosexual couples,” Torres said.

The advances made by the new Code include recognition for the first time in this Central American country that civil unions – but only between a man and a woman – have the same rights and obligations as traditional married couples.

Ramón Rodríguez, a professor of criminal law and human rights law at the Central American University and the American University, said that because the Code “establishes that marriage and stable civil unions are only between a man and a women, a significant segment of the population, which forms part of the sexual diversity spectrum, is the direct victim of the violation of the universal principals of equality and non-discrimination.”

But Samira Montiel, Nicaragua’s ombudswoman for sexual diversity, disagreed with the criticism by human rights activists and LGBTI rights organisations.

Montiel said that although “for now” same-sex marriage has not been recognised, “the individual rights of each member of the lesbian-gay community are protected because they have equal rights as siblings, children, parents, relatives and citizens.”

“No lesbian woman or gay man who has a child will lose their right to parenthood, and they won’t be denied any benefits. So far I haven’t received a single formal complaint about the Code, no one has appealed it, there isn’t a single request for adoption of a child by a gay couple, and healthcare has not been denied to any lesbian or bisexual,” she told IPS.

One of the positive aspects of the Code is the fact that it accelerates the legal process for suing for alimony in divorce cases. Instead of dragging on for up to five years, the process can now take no longer than 150 days.

It also sets child support for sons and daughters under 18 to up to half of the income of the parent who is being sued, and creates fines for incompliance.

In addition, it creates a process for elderly parents to sue their children for abandonment, and gives sons and daughters up to the age of 24 the right to receive from their families money to buy food, in the case of proven need.

Furthermore, it addresses matters related to divorce, the division of assets, child protection, parental leave and other areas.

It also prohibits physical punishment or other humiliating treatment of children in any setting, and sets the age of marriage at 18 – the age of majority for both sexes, in terms of legal obligations.

The Nicaraguan federation of non-governmental organisations that work on behalf of children and adolescents had demanded that the age of marriage be raised, in order to put an end to marriages between girls aged 14 or even younger to adult men.

These marriages are often the so-called “family remedy” in cases of sexual abuse or pregnancy of girls and adolescents by adult men.