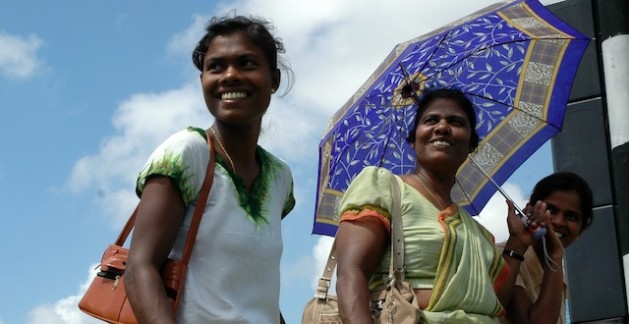 The few Sri Lankan women who seek employment find that the system does not work in their favour. Credit: Amantha Perera/IPS

MIRIGAMA, Sri Lanka , May 28 2015 (IPS) - Wathsala Marasinghe, a 33-year-old hailing from the town of Mirigama, just 50 km from Sri Lanka’s capital, Colombo, once had high hopes that the progressive education and employment policies of this South Asian island nation would work in her favour. Today, she feels differently, believing that “an evil system” has let her down.

As a young girl, she attended one of the best schools in the area and was selected to attend a state university. “I went there with so much hope,” she tells IPS – but apparently with little knowledge of her true job prospects.

"Paternity leave, child care, crèche services at workplaces, and better and safer public transport facilities for women could be [provided] by the private and public sectors in order to incentivise women to join the labour market." -- Anushka Wijesinha, a consultant to Sri Lankan government ministries
As an undergraduate she studied Buddhism and her native tongue, Sinhala. Her plan was to secure a government job, possibly in teaching or in the public service, and preferably close to home.

But when it came time to job-hunt, she found herself coming up against one wall after another.

“I kept applying and going for interviews but never got a job except as a secretary at a small factory,” she says.

This post did not come close to her employment aspirations, and she was forced to quit after a month. “The salary was 8,000 rupees (about 59 dollars) – I had to spend half of that on traveling,” she explains. The average monthly income in Sri Lanka is about 300 dollars.

She continued to apply, but each time she found herself sitting among a crowd of applicants that seemed to get younger and younger.

The stark reality of the situation has now become clear to her, and she has given up going for interviews altogether, embarrassed to be in the company of other hopefuls who “look like my daughters.”

Marasinghe’s conundrum is not rare in Sri Lanka, despite the country’s purported efforts to achieve targets on gender equality and visible signs of progress on paper.

In 2012, the Gender Gap Report produced by the World Economic Forum ranked Sri Lanka 39th out of 135 countries surveyed, an unsurprisingly strong placement given that the country of 20 million people has a female adult literacy rate of 90 percent. This rises to 99 percent for female youth in the 15-24 bracket.

Furthermore, girls outnumber their male counterparts at the secondary level, indicating a dedication to gender equality across the social spectrum.

However this has not translated into equitable employment opportunities, or wage parity between men and women.

The female unemployment rate in Sri Lanka is over two-and-a-half times that of the male rate, and almost twice the national figure. According to government data, only 2.9 percent of men entering the labour market remain unemployed, while the corresponding figure for women is 7.2 percent. The national unemployment rate is 4.2 percent.

The same government figures indicate that education and skills do not necessarily help females secure employment – on the contrary, they could result in a lifetime of frustrations.

“The problem of unemployment is more acute in the case of educated females than educated males,” said the latest labour force survey compiled by the Census and Statistics Department.

Experts say there are a multitude of structural and social reasons behind the high rate of female unemployment.

For starters while nearly three in four males enter the job market, it is the reverse for women, with just 35 percent of working-age females actually seeking employment, resulting in a skewed supply chain.

Economist Anushka Wijesinha, who works as a consultant to international organisations, says that women who seek higher education also have higher job aspirations, but the job market has not grown fast enough to cater to such needs.

“Aspirations are shifting away from working in the industrial sector as before – more women are keen to work in services like retail […] but jobs in this sector haven’t grown fast enough to cater to the changing aspirations. So we are seeing ‘queuing’, women waiting for those jobs and not getting them,” he tells IPS. Muttukrishna Sarvananthan, an economist who heads the Point Pedro Institute of Development, shares that analysis, but believes that female unemployment levels should be adjusted to include the roughly 600,000 Sri Lankan women working overseas, the bulk as domestic workers.

He is also an advocate of placing an economical value on women who are fully occupied with looking after households.

Currently, the single largest employer of women is the agricultural sector at 33.9 percent, while the services sector employs around 42 percent of women, while industries employ around 24 percent.

There are other reasons why women stay away from work. Nayana Siriwardena, a 35-year-old mother of two, used to work till she had her first child. After the government-stipulated three months’ maternity leave ran out, she had to return to work.

“What I found problematic was that the workplace could not be flexible enough to address my situation,” she said.

She worked in bookkeeping and tried to impress upon her employers that some of the work could be done from a remote location.

“But they did not understand that, which I found surprising because the company was quite progressive in other areas and also because young mothers are not a rare occurrence in any establishment.”

Wijesinha feels that maternal benefits themselves, which legally must be provided for three months, can act as a deterrent to some companies.

“Maternal benefits have to be paid in full by the employer. This means that employers may be deterred [from] hiring young women, because they know they likely have to pay maternal benefits,” he said.

Sarvananthan says that security for women – at the work place, during the commute, and for their offspring – could play a huge role in changing employment figures.

“In order to boost labour force participation by women, a carrot-and-stick approach could be pursued by the state. Paternity leave, child care, crèche services at workplaces, and better and safer public transport facilities for women could be [provided] by the private and public sectors in order to incentivise women to join the labour market,” he argues.

He also believes the government should ink an equal opportunities law that legally undermines discriminatory policies. Currently, the constitution stipulates that no one should be discriminated based on sex, but there is no law that provides for equal pay for the same work.

Having more women in the workplace is not only a current problem but could also be a future crisis, as Sri Lanka’s working population ages. Currently, 17 percent of the population is above the age of 55, while 25 percent is below 15 years, meaning only around 50 percent are believed to be in the working age group.

“Given that women comprise just over half of the population, and our working age population peak is beginning to wane, it is critical that we have maximum participation from women in the workforce,” Wijesinha states.

Many believe a higher portion of women in decision-making positions could right these imbalances.

As the country moves towards elections, activists and rights groups are calling for a 30 percent quota for women in the 20th amendment to the constitution.

If this goal is realised, it could spell change for people like Marasinghe, who, after a decade of searching for her elusive dream job, has all but given up hope.