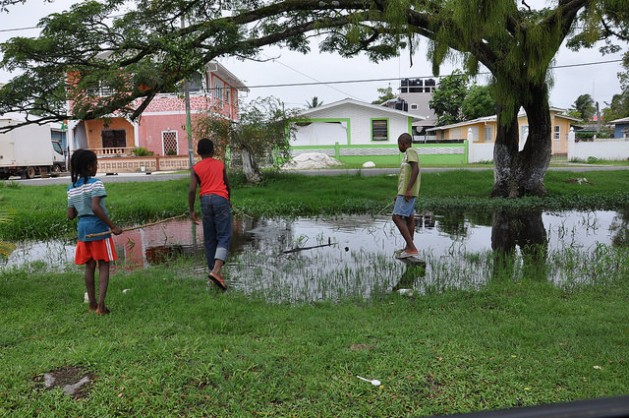 Boys catch fish in a gully that runs through their community in Guyana. Credit: Desmond Brown/IPS

GEORGETOWN, Jun 10 2015 (IPS) - Despite its highly variable climate, Guyana is the only Caribbean Community (CARICOM) country that enjoys food security. But rapid climate change could pose a challenge not only for Guyana, but for its Caribbean neigbours who depend on the South American country for much of their produce.

“The big expenditure will come if we ever have to move from the coastline and go further inland...That would be something that we don’t want to contemplate but you can never tell when a catastrophe could strike." -- President David Granger

David Granger, who became Guyana’s new president after winning general and regional elections here on May 11, said his administration is not taking this for granted, and he is fully aware that climate change could cause the country to lose its food-secure status.

“On the coastland which is low and flat, the climate is actually slightly different to the hinterland and the forested mountainous areas where the rainfall is very heavy, part of the Amazonian rainforest; and deeper south, closer to Brazil you have a completely different terrain, a landscape of savannahs,” Granger told IPS.

The government is spending six million dollars annually on drainage and irrigation and requires some 100 million dollars to adapt its drainage infrastructure to deal with the effects of climate change.

“We have to plan a policy…we have to chart a course that protects our citizens and traditionally as far as coastal zone management is concerned. We have had to build sea defences and build proper drainage and irrigation works otherwise our people will be flooded out,” Granger said.

He related that the country experienced “a terrible flood exactly 10 years ago” and many of the communities on the coast were affected.

“We lost billions of dollars because of floods. So we have to protect our people from that type of catastrophe and we just have to continue  what we’ve been doing traditionally in terms of seawalls but also we have to implement plans to prevent the excessive cutting down of our trees and of course reforestation to plant back areas that have been mined out.” 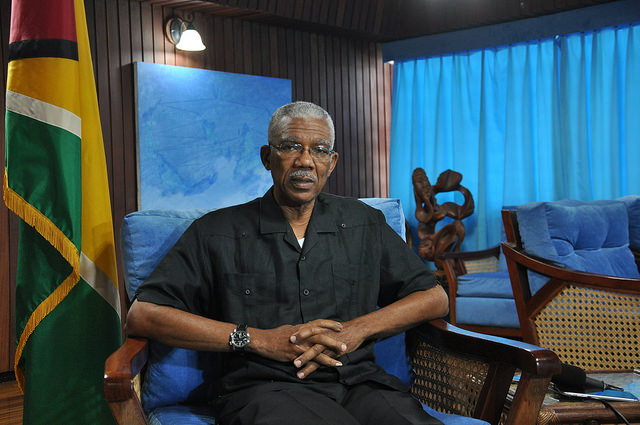 An impressive 80 percent of Guyana’s surface area is covered by rainforest the size of England. Beneath the jungle and savannah lie gold, diamond and bauxite – staples of Guyana’s economy.

Norway has committed to providing Guyana up to 250 million dollars by 2015 for avoided deforestation once certain performance indicators are met. Earnings from the partnership to date amount to 190 million dollars.

It is one of the highest payments worldwide for results achieved under a bilateral REDD+ partnership, second only to Brazil.

The partnership between Guyana and Norway began in 2009 and payments made to Guyana under it support the country’s ambitious climate action, keeping deforestation low while promoting development and sustainable economic growth through the country’s Low Carbon Development Strategy (LCDS).

“The big expenditure will come if we ever have to move from the coastline and go further inland which is higher,” Granger said.

“Most of the inland territory, maybe 50 kilometres from here, is higher and the sort of doomsday scenarios that we might have to abandon some parts of the coastline, that would be a tremendous cost. That would be something that we don’t want to contemplate but you can never tell when a catastrophe could strike.”

The Guyanese president said the country has also been putting aside funds from the millions earned annually from the extractive industries.

“As part of our policy which we’ve already announced, profits from revenues from extractive industries – gold, timber, diamond, bauxite – will be used in something we call Sovereign Wealth Fund so that our children don’t have to face the ravages of poverty,” he said.

“It is something we have to include in our budget…we must start putting aside money in order to prepare for any form of catastrophe. We can’t depend on handouts all the time,” Granger added.

“If Guyana, for instance, has significant flooding, and the major rivers overflow, the contents can reach our coasts via ocean currents. This can lead to fish kills and stress on the coral reefs in Barbados. Also climate change aids in the spread of vector-borne diseases, e.g. chikungunya and may cause a re-emergence of yellow fever and malaria,” she told IPS.

“In terms of food security, if we import most of our food from one country and it is diminished, then we will be severely affected. For example, if a large hurricane decimates a country like Ivan did to Grenada in 2004, it can destroy the country’s economy and draw on the resources of neighbouring islands such as water and food.”

Barbados’ imports from Guyana have grown the fastest of all imports from CARICOM countries except for Trinidad & Tobago, according to data published by the Central Bank of Barbados. Barbados imports more than 15 million dollars’ worth of goods from Guyana annually. The Caribbean as a whole expends 3.5 billion annually on food importation.

Sealy noted that Small Island Developing States like those in the Caribbean would be the first to be impacted by climate change.

“Owing to our size, we have limited land, water, and food. We import oil. So if something happens in another country that has the oil and food, we would not have any and we would be in a vulnerable state,” she said.

CYEN is a non-profit, non-governmental, regional organisation which has been empowering youth to address issues such as climate change, sustainable land management, solid waste management and other sustainable development issues. They have been operating since 1993 and there are currently 18 chapters in the Caribbean.

CYEN believes that there should be no decisions made about sustainable development without the involvement of youth.

Sealy said CYEN is on a drive to empower youth to address issues surrounding climate change.

The World Wide Views is the largest citizen consultation in the world which aims to include citizen voices into major international decisions. World Wide Views consultations were conducted by five CYEN chapters last weekend in Barbados, Bahamas, Grenada, Guyana and Haiti.