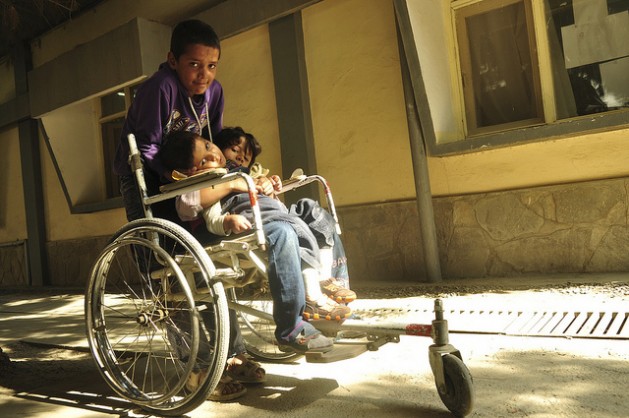 Aid from the UK is supporting a network of orthopaedic centres across Afghanistan to assist those affected by mobility disabilities, including hundreds of mine victims. Credit: DFID – UK Department for International Development/CC-BY-2.0

UNITED NATIONS, Jun 29 2015 (IPS) - No one will deny that when a child – any child – is killed, it is a tragedy. Imagine, then, the extent of the tragedy in Afghanistan where, in just four years, 2,302 children have lost their lives as a result of ongoing fighting in this country of 30 million people.

According to his latest report on children and armed conflict in Afghanistan, United Nations Secretary-General Ban Ki-moon states that more kids were killed or maimed in 2014 than in any previous year under review.

Ground engagements were reportedly the number one cause of child casualties, leaving 331 children dead and 920 injured in 2014; these figures represent a doubling of the number from the previous year.

Armed groups’ use of improvised explosive devices (IEDs) in populated areas resulted in 664 casualties, while suicide attacks took the lives of 214 children – an increase in 80 percent compared to 2013.

The report also stated that “explosive remnants of war killed or maimed 328 children”, while international military airstrikes left 38 kids either dead or injured – including eight from drone strikes alone.

The biggest culprits appear to have been the Taliban and the Hizb-e-Islami, followed closely by the Afghan National Securities Forces, who were responsible for 126 killings and 270 injuries.

Five kids were killed and 52 injured in cross-border shelling from Pakistan. The U.N. was unable to verify the cause of death in 163 cases, and chalks up a further 505 injuries to “crossfire”, without being able to attribute responsibility to any particular group.

“These tragically high casualty numbers show that children are bearing the brunt of the conflict, and unfortunately this trend continues with the deterioration of the security environment into 2015,” Leila Zerrougui, the Secretary-General’s special representative for children and armed conflict said in a press release last week.

Various actors, primarily the Taliban and similar armed groups, forcibly recruited an estimated 68 children into their ranks. In an even more troubling trend, kids continue to carry out suicide attacks for the Taliban and perform a range of dangerous or potentially life threatening tasks like planting IEDs or acting as spies.

Detention and torture of children is also a major cause of concern for rights activists, with the ministry of justice reporting 258 boys held in juvenile detention centres on charges relating to national security, including “association with armed groups”.

Between February 2013 and December 2014, the U.N. interviewed 105 child detainees, 44 of who claimed they had experienced ill-treatment or torture.

Another aspect of the conflict that directly impacts children here is the systematic and sustained attack on schools throughout the country.

U.N. researchers verified 163 incidents, including the placement of explosive devices within school premises, attacks on schools used as polling stations, threats against protected personnel or teachers, and the targeting of girls’ education by way of intimidation, propaganda, or physical attacks.

The U.N. believes that 469 Afghan schools are closed as a result of the shaky security situation, with an estimated 30,000 to 35,000 Taliban fighters reportedly active in most provinces around the country.

Children are also at risk of sexual assault – in the review period, eight boys and six girls were victims of sexual violence, with four of the verified cases traced back to the national police and one to a “pro-government militia commander.”

Furthermore, “Twenty-four boys and two girls were abducted in 17 separate incidents, resulting in the killing of at least four boys by the Taliban, the rape of two girls by the local police, and the rape of a boy by a pro-Government militia,” according to the U.N.

As a new government attempts to gain control over the situation, U.N. experts are hopeful that the deadly tide can be reversed.

“I look forward to working with the Government of Afghanistan even more intensively in the months ahead as we move towards fully implementing the country’s Action Plan for ending recruitment and use of children,” Zerrougui said at the report’s launch this past Thursday.