Daniele Brunetto is Youth Amabassador for The ONE Campaign in Belgium.

BRUSSELS, Jun 19 2015 (IPS) - As a young person interested in development, my heart beats a little faster when I look at the potential of 2015. There has never been so much at stake as this year for the future of our planet. 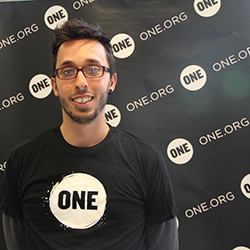 2015 is full to bursting with game-changing moments for development. The recent G7 summit got the ball rolling on the post-2015 agenda, while other key moments of the year include the United Nations General Assembly in September, when the new Sustainable Development Goals (SDGs) will be agreed on, and the U.N. Climate Change Conference in Paris in December, which will close this pivotal year.

However, the number one moment for me this year is the Third International Conference on Financing for Development, from July 13 to 16. Here, world leaders, civil society and relevant actors from the private sector will gather in Addis Ababa and set out a path for financing the next 15 years of international development.

Why is Addis such a momentous opportunity? Firstly, it is about learning from the past and looking to the future – working out where the Millennium Development Goals succeeded, and where they fell short – and most importantly, how this can be rectified in the future.

We want to see ambitious, concrete and measurable commitments to end extreme poverty by 2030, making sure the poorest are put first and that no-one is left behind.

Secondly, Addis provides a crucial opportunity to move the discussion beyond aid, and to engage with private sector investment and increase domestic resource mobilisation, through fighting corruption and curbing illicit financial flows.

Thirdly, it allows for a reassessment of what exactly aid is for, and whom it should be directed to over the next 15 years and beyond. Embracing alternative sources of financing for development is vital, but this must be coupled with the mapping out of aid flows to where it is most needed.

Seeing as the Least Developed Countries have limited means to generate domestic revenue and attract foreign investment, and that these countries have far greater proportions of people living in extreme poverty, it doesn’t take a genius to work out that it is those countries which should be prioritised when it comes to aid flows.

So, how are things looking? Are world leaders ready to come to Addis and to ensure that the new Goals are well financed, well tracked, and that they meet the basic needs of all?

Let’s look at the European Union. It’s the world’s largest provider of Official Development Assistance (ODA), and its overall levels of spending are increasing year after year. However, its own target of spending 0.7 percent of its collective GNI on ODA remains decidedly unmet.

Although EU leaders have recently reaffirmed their commitment to reaching this target as part of the post-2015 agenda, they have not set out a clear roadmap on how and when this will be implemented, which brings their commitment into question.

Among the European countries who could take the lead on this, I would like to see my own country, Italy, stepping up. Although Italy’s investment in ODA leaves a lot to be desired (Italy gave just 0.16 percent of its GNI in ODA in 2014), it has demonstrated a clear ambition to reach the goal soon and to ensure an increasing amount of transparency in investment in developing countries.

It was indeed under the Italian Presidency of the Council of the European Union that new anti-money laundering rules were approved, something which can help combat illicit financial flows from developing countries. While the rules leave it up to member states to render this information public, this is undeniably a step forward, and I can only be happy about this achievement of my country!

So, what can I do, as a young ‘development geek’, a ‘factivist’, in order to make sure this year doesn’t pass in vain? Lots, as my time campaigning with ONE has proven!

As a young anti-poverty activist, I have learned that world leaders are not as distant to young voices as I expected, and that our demands do not fall on deaf ears. With my fellow Youth Ambassadors, for example, I was able to convince over half of the Members of the European Parliament to publicly commit to do everything in their capacity to end extreme poverty by 2030.

We, as young people, must show leaders how important it is to us to bring about the end of extreme poverty within a generation. Supported by powerful data and irrefutable facts, we must push our representatives to stand up for the world’s poorest and seize the opportunities this year offers with both hands.

We want to see ambitious, concrete and measurable commitments to end extreme poverty by 2030, making sure the poorest are put first and that no-one is left behind. This year we can shape a better future, and we, as young people, must play our part and make our voices heard.