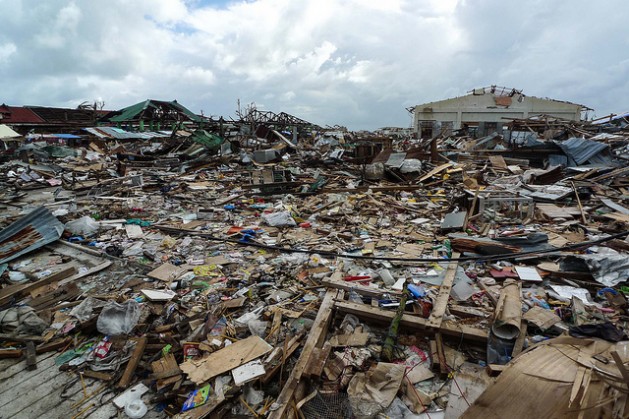 TAIPEI, Jun 10 2015 (IPS) - I live on a crowded, subtropical island ​nation ​in the Western Pacific, on the opposite side of the “Pacific Pond” from North America. And just south of Taiwan is the ​many-splendored island nation of the ​Philippines. We are neighbours. You can fly there in one hour, it’s that close.

So when Typhoon ​Yolanda hit Tacloban City in the Philippines in November 2013, we ​in south Taiwan ​could feel the rain and wind here in Taiwan, although the storm made its direct hit on Tacloban and ​sadly ​killed 7,000 people there.

​The Philippines has been a Catholic country for over 400 years now. People ​there ​know the Bible, people know Jesus, and people are devout and deeply religious.

So when the well-known Filipino film director Brillante ​Ma ​Mendoza decided to make a feature film about the aftermath of ​what the international community called ​Typhoon Haiyan — known as ”Typhoon Yolanda” in the Philippines — he used a quote from the ​Bible to bookend the story: “A time to tear ​one’s garments and mourn, and a time to ​mend and ​​build up.”

Mendoza’s ​powerful and emotional ​cli-fi movie “Trap” (called “Taklub” in Tagalog, the national language of the Philippines) was set up originally as an ”advocacy movie” financed by the government of the Philippines ​and produced by a senator from the national parliament ​to help raise awareness of typhoon readiness and the resilience of the Filipino people.

The carefully-crafted 90-minute feature has already been shown at the Cannes Film Festival and has a good chance of bagging an Oscar next year in Hollywood in the best foreign film category.

It’s that good, it’s that poignant, it’s that brilliant. Mendoza is a film director who is well-known in Asia, but while “Trap” is a powerful climate-themed movie with a great cast and helmed by a savvy director, whether the movie will catch on among arthouse fans in Europe and America ​it ​is hard to say.​

But for the Cli Fi Movie Awards, whose mission is to wake up the world via movie awards about climate change issues. of all the cli fi films nominated for 2015, “Taklub” took top honours in all categories this year! It is that important a movie.

“Trap” is a quiet, slow-moving, thoughtful piece of international cinema. It stars the famous Filipina actress Nora Aunor, and for her performance alone, the film is worth the price of admission.

​The quote from Ecclesiastes ​fits this movie to a T.

For me, that’s what “Trap” is about: a powerful piece of cli-fi storytelling that is about an almost unspeakable tragedy, following the lives of a group of typhoon survivors trying to pick up the pieces of their lives, but at at the same time Mendoza says after the tear​ing of garments ​ and mourning, it’s time to mend the country and get things right again. And prepare for the next big storm as well.

​I asked a professor from Vanderbilt Law School in Nashville, Tennessee, Edward Rubin, who is very concerned with climate change issues and the power of novels and movies to impact changes in public awareness, what he thought of Mendoza’s movie and its power to effect change.

“Written and audiovisual fiction (cli-fi novels and cli-fi movies like ‘Taklub’) can — and must — play a crucial role in educating people worldwide about climate change,” Rubin told me. “To begin with, people will watch the movie and be moved by it; they are not going to look at government charts and scientific research papers.”

Even more important, movies like ‘Taklub’ present scenarios that make large events comprehensible and future possibilities concrete,” he added, noting: “What is truly false, and belongs in the category of puerile fantasy, is to deny that climate change is occurring. The fact is that many of the grim possibilities portrayed in a cli-fi movie like ‘Taklub’ will become realities unless we take global concerted action.”​

“Trap” is not a documentary. It’s pure storytelling, pure cinema, pure magic. Can it help to raise awareness about global warming and climate change in the Philippines and worldwide?

Mendoza set out to make a touching local movie for audiences in the Philippines first, but he has succeeded in creating a piece of art that transcends borders now and has a global tale to tell.

It’s well worth seeing if it comes your way.