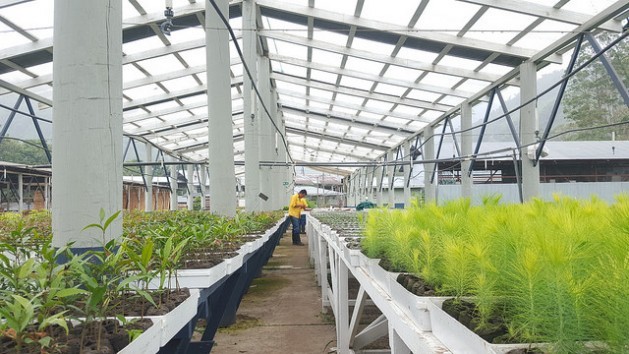 A worker prepares seeds in the nursery where Costa Rica’s energy utility, ICE, grows 300,000 trees a year in Cachí, in the central province of Cartago, which it distributes to the public as well as institutions and companies. Credit: Diego Arguedas Ortiz/IPS

SAN JOSE, Jul 13 2015 (IPS) - Millions of Latin Americans have better access to clean water and decent housing than 25 years ago. But the region still faces serious environmental challenges, such as deforestation and greenhouse gas emissions – a legacy of the model of development followed in the 20th century.

Fifteen years after signing on to the eight Millennium Development Goals (MDGs), the countries of Latin America have made significant headway in eradicating slums, expanding sanitation services, and providing access to clean water.

But progress towards ensuring environmental sustainability is lagging due to a fossil fuel-intensive development model based on the extraction of minerals and monoculture agriculture and livestock raising that expand at the expense of the forests.

“There has been uneven progress, with ups and downs,” said Joseluis Samaniego, director of the Division for Sustainable Development and Human Settlements of the Economic Commission for Latin America and the Caribbean (ECLAC).

“In general terms, you have clear, outstanding advances in terms of access to water and sanitation, and we have the impression that those targets will be met,” he told Tierramérica from ECLAC’s regional headquarters in Santiago.

These targets form part of the seventh MDG, which refers to ensuring environmental sustainability, with measurable time-bound targets for the end of this year, based on 1990 indicators.

At year-end, the MDGs will be replaced by 17 Sustainable Development Goals (SDGs), which the heads of state and government of the 193 United Nations member states are to approve at a summit in September.

Of the targets set by the seventh MDG, this region met the one for halving the proportion of people without sustainable access to safe drinking water, five years before this year’s deadline. And between 1990 and 2015, the proportion of the population with sustainable access to an improved water source increased from 85 to 95 percent, although there are still millions of Latin Americans without clean water.

Furthermore, from 1990 to 2014, the proportion of Latin Americans living in slums was nearly cut in half, from 37 to 20 percent, according to U.N. figures.

But that means there is still a long way to go, with more than 100 million people in this region living in slums and shantytowns.

Samaniego said the progress made towards meeting these targets reflects the region’s public spending effort and the clarity of the goals.

“When the MDGs were approved…the clear targets and incentives for monitoring helped countries organise and move forward towards the goals,” the ECLAC official said.

But with respect to incorporating sustainable development and the environment in public policies, there have been fewer advances.

The latest U.N. report assessing global and regional progress towards the MDGs, published Jul. 6, shows that Latin America has not made impressive progress in achieving environmental sustainability.

“Forests are disappearing at a rapid pace, despite the establishment of forest policies and laws supporting sustainable forest management in many countries,” says a regional synthesis document on the report.

Latin America’s economies are still fairly carbon-intensive. One mechanism to measure this is carbon intensity, or how many grams of carbon it takes to produce one dollar of GDP.

“There is an almost linear correlation between a country’s GDP growth and energy consumption, and as long as the energy mix is still based on fossil fuels, it will be directly linked to a rise in emissions,” said Gonzalo Pizarro, regional adviser on poverty, MDGs and human development at the UNDP regional service centre for Latin America and the Caribbean, in Panama City.

In 1990, the region emitted just under one billion metric tons of carbon dioxide (CO2) equivalent – less than five percent of the world total.

Although the region’s share remained the same in 2011, in just two decades emissions produced by Latin America and the Caribbean rose 80 percent, to 1.8 billion metric tons of CO2, according to the UNDP.

This target, included in the seventh MD, has one particularity: although policies arise from internal decision-making in each country, the results have a global impact.

Although indicators like emissions and loss of forest cover “are linked to people’s well-being, they also have to do with the development model followed by countries,” Pizarro told Tierramérica.

“In economies based on raw materials or commodities, like most of the countries of Latin America and the Caribbean, the deforestation rate will remain high, because economic pressure to exploit the forests will continue to be extremely heavy,” he said.

According to the expert, the challenge to be met is modifying the energy mix, while the decisions taken by countries are still focused on the large-scale production of commodities that affect biodiversity.

“As long as decision-makers are incapable of comparing the short-term benefits of this exploitation with the real value of the ecosystemic services provided by forests, this is likely to continue happening on a large scale,” Pizarro said.

The ECLAC and UNDP experts recognised the environmental efforts made by countries in the region like Cuba and Costa Rica, which have reforested; Chile and Uruguay, which have successfully integrated forest industries in their economies; and Brazil, which reduced deforestation in the Amazon.