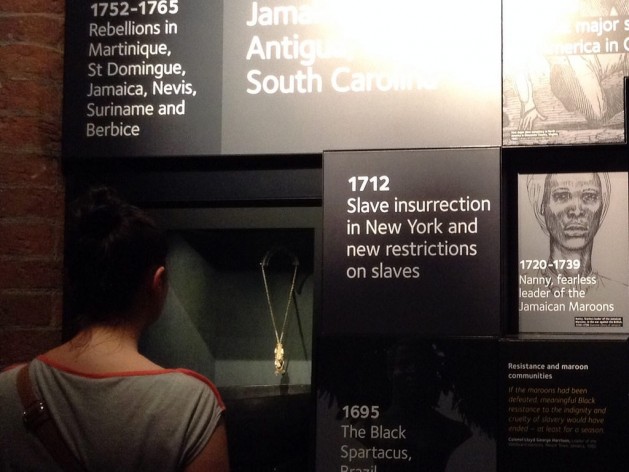 A visitor looking at a panel at the International Slavery Museum in Liverpool, England. Credit: A.D. McKenzie/IPS

LIVERPOOL, England, Jul 21 2015 (IPS) - An exhibition on modern-day slavery at the International Slavery Museum in this northern English town is just one example of a museum choosing to focus on human rights, and being “upfront” about it.

The institution looks at aspects of both historical and contemporary slavery, while being an “international hub for resources on human rights issues”.

It is a member of the Liverpool-based Social Justice Alliance for Museums (SJAM), formed in 2013 and now comprising more than 80 museums worldwide, and it coordinated the founding of the Federation of International Human Rights Museums (FIHRM) in 2010. 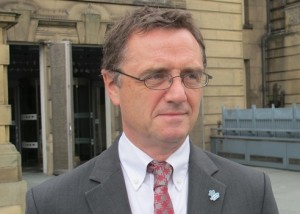 The aim of FIHRM is to encourage museums which “engage with sensitive and controversial human rights themes” to work together and share “new thinking and initiatives in a supportive environment”. Both organisations reflect the way that museums are changing, said Fleming.

“Museums are not dispassionate agents,” he told IPS. “They have a role in safeguarding memory. We have to look at the role of museums and see how they can transform lives.”

The International Slavery Museum’s current exhibition, titled “Broken Lives” and running until April 2016, focuses on the victims of global modern-day slavery – half of whom are said to be in India, and most of whom are Dalits, or people formerly known as “untouchables”.

The display “provides a window into the experiences of Dalits and others who are being exploited and abused through modern slavery in India”, say the curators.

“Dalits still experience marginalisation and prejudice, live in extreme poverty and are vulnerable to human trafficking and bonded labour,” they add.

Presented in partnership with the Dalit Freedom Network, the exhibition uses photographs, film, personal testimony and other means to show “stories of hardship” that include sexual servitude and child bondage. It also profiles the activists working to mend “broken lives”.

“Museums [in Liverpool, Nantes, Guadeloupe and Bordeaux ] hope that they can play a role in global citizenship, educating the public and encouraging visitors to leave with a different mind-set – about respect for human rights, social justice, diversity, equality, and sustainability”

The display occupies a temporary exposition space at the museum, which has a permanent section devoted to the atrocities of the trans-Atlantic slave trade and the legacy of racism.

Along with the Memorial to the Abolition of Slavery in the French city of Nantes and the recently opened Mémorial ACTe in Guadeloupe, the Liverpool museum is one of too few national institutions focused on raising awareness about slavery, observers say.

But it has provided a “vital source of inspiration” to permanent exhibitions on the slave trade in places such as Bordeaux, southwest France, according to the city’s mayor Alain Juppé. Here, the Musée d’Aquitaine hosts a comprehensive division called ‘Bordeaux, Trans-Atlantic Trading and Slavery’ – with detailed, unequivocal information.

These museums hope that they can play a role in global citizenship, educating the public and encouraging visitors to leave with a different mind-set – about respect for human rights, social justice, diversity, equality, and sustainability.

“We try to overtly encourage the public to get involved in the fight for human rights,” Fleming told IPS in an interview. “We’ve often said at the Slavery Museum that we want people to go away fired up with the desire to fight racism.

“You can’t dictate to people what they’re going to think or how they’re going to respond and react,” he continued. “But you can create an atmosphere, and the atmosphere at the Slavery Museum is clearly anti-racist. We hope people will leave thinking: I didn’t know all those terrible things had happened and I’m leaving converted.”

Despite Liverpool’s undeniable history as a major slaving port in the 18th century, not everyone will be affected in the same way, however. There have been swastikas painted on the walls of the museum in the past, as bigots reject the institution’s aims.

“Some people come full of knowledge and full of attitude already, and I don’t imagine that we affect these people. But we’re looking for people in the middle, who might not have thought about this,” Fleming said. 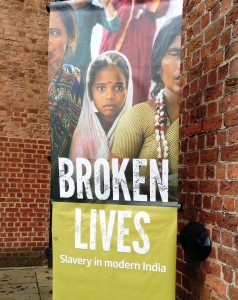 A poster sign for the ‘Broken Lives’ exhibition under way at the International Slavery Museum in Liverpool. Credit: A.D. McKenzie/IPS

He described a visit to the museum by a group of English schoolchildren who initially did not comprehend photographs depicting African youngsters whose hands had been cut off by colonialists.

When they were given explanations about the images, the schoolchildren “switched on to the idea that people can behave abominably, based on nothing but ethnicity,” he said.

Fleming visits social justice exhibitions around the world and gives information about the museum’s work, he said. As a keynote speaker, he recently delivered an address about the role of museums at a conference in Liverpool titled ‘Mobilising Memory: Creating African Atlantic Identities’.

The meeting – organised by the Collegium for African American Research (CAAR) and a new UK-based body called the Institute for Black Atlantic Research – took place at Liverpool Hope University at the end of June.

It began a few days after a white gunman killed nine people inside the historic Emanuel African Methodist Episcopal Church, in the U.S. state of South Carolina.

The murders, among numerous incidents of brutality against African Americans over the past year, sparked a sense of urgency at the conference as well as heightened the discussion about activism – and especially the part that writers, artists and scholars play in preserving and “activating” memory in the struggle for social justice and human rights.

“Artists, and by extension museums, have what some people have called a ‘burden of representation’, and they have to deal with that,” said James Smalls, a professor of art history and museum studies at the University of Maryland, Baltimore County (UMBC).

“Many times, artists automatically are expected to speak on behalf of their ethnic group or community, and some have chosen to embrace that while others try to be exempt,” he added.

Claire Garcia, a professor at Colorado College, said that for a number of academics “there is no necessary link between scholarship and activism” in what are considered scholarly fields.

Such thinkers make the point that scholarship should be “theoretical” and “universal,” and not political or focused on “the specific plights of one group,” she said. However, this standpoint – “when it is disconnected from the embattled humanity” of some ethnic groups – can create further problems.

The concept of museums standing for “social justice” is controversial as well because the issue is seen differently in various parts of the world. The line between “objectifying and educating” also gives cause for debate.

Fleming said that National Museums Liverpool, for example, would not have put on the contentious show “Exhibit B” – which featured live Black performers in a “human zoo” installation; the work was apparently aimed at condemning racism and slavery but instead drew protests in London, Paris and other cities in 2014.

“Personally I loathe all that stuff, so my vote would be ‘no’ to anything similar,” Fleming told IPS. “And that’s not because it’s controversial and difficult but because it’s degrading and humiliating. There are all sorts of issues with it, and I’ve thought about that quite a lot.”

He and other scholars say that they are deeply conscious of who is doing the “story-telling” of history, and this is an issue that also affects museums.

Several participants at the CAAR conference criticised certain displays at the International Slavery Museum, wondering about the intended audience, and who had selected the exhibits, for instance.

A section that showed famous individuals of African descent seemed superficial in its glossy presentation of people such as American talk-show host Oprah Winfrey and well-known athletes and entertainers.

Fleming said that museums often face disapproval for both going too far and not going “far enough”. But taking a disinterested stand does not seem to be the answer, because “the world is full of ‘faux-neutral’ museums”, he said.

The most relevant and interesting museums can be those that have a “moral compass”, but they need help as they can “do very little by themselves,” Fleming told IPS. The institutions that he directs often work with non-governmental organisations that bring their own expertise and point of view to the exhibitions, he explained.

Apart from slavery, individual museums around the world have focused on the Holocaust, on apartheid, on genocide in countries such as Cambodia, and on the atrocities committed during dictatorships in regions such as Latin America.

“Some countries don’t want museums to change,” said Fleming. “But in Liverpool, we’re not just there for tourism.”