Dorothee Häussermann and Martin Weis are members of Ende Gelände, a grassroots coalition of environmental activists. 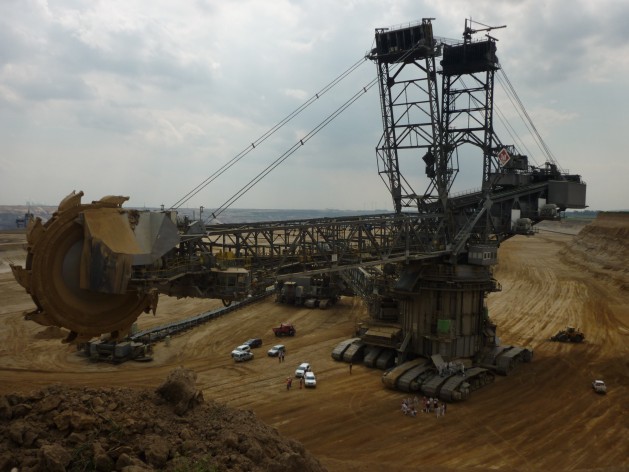 It’s a late June evening in the German town of Mayence and about 40 people are gathered to discuss a coal phase-out and degrowth.

“It’s possible,” continues the speaker. “You just walk up to the excavator and it will stop – at least temporarily. So, if you take the threat of climate change seriously, what keeps you from stopping the destruction right on the spot?”

“Large sections of the climate justice movement no longer believe that U.N. negotiations or lobby-ridden governments will come up with the urgent solutions needed to solve our socio-ecological crisis”

To keep coal in the ground and not burn it in order to avert catastrophic climate change, we now know that we cannot rely on the German government. Yesterday, Jul. 1, the partners of the ruling coalition scrapped a proposed climate levy, an instrument that had been proposed by energy minister Sigmar Gabriel to still reach the national climate goals for 2020, an overall emissions reduction of 40 percent.

As it stands, the energy sector is behind on its targets, largely due to the continued use of lignite or brown coal. Four of Europe’s five largest emitters are German lignite power plants and coal accounts for one-third of the country’s greenhouse gas emissions.

The climate levy proposed a cap on CO2 emissions for individual power plants, which would have primarily affected the oldest and dirtiest lignite power stations. The measure was backed by climate scientists and economic experts. It also enjoyed huge public support, with the overwhelming majority of Germans in favour of a coal phase-out.

However, powerful interests mobilised against the measure. These included members of the governing parties, the big power suppliers RWE and Vattenfall which would have been most affected, and IGBCE, the mining industry trade union.

Playing the ‘jobs-will-be-lost’ card, they introduced an alternative proposal, which has been criticised for seeking smaller emission cuts at a higher cost to consumers and taxpayers. Yet, the government agreed yesterday to drop the climate levy in favour of the industry proposal.

Two points are particularly infuriating and in fact quite worrying. There seems to be an absolute disconnect between Chancellor Angela Merkel’s earlier rhetoric of the ‘decarbonisation of the worldwide economy’ at the Jun. 7-8 G7 Summit in Elmau, and the actions of her government at home only a few days later. Secondly, the influence of the coal industry in the democratic process is staggering. Their hastily compiled alternative actually carried the day and the big polluters are let off the hook.

The German example is a case in point of why large sections of the climate justice movement no longer believe that U.N. negotiations or lobby-ridden governments will come up with the urgent solutions needed to solve our socio-ecological crisis.

This is why we are taking the creation of an equitable and ecological society into our own hands instead of relying on promises of green growth or paying lip service to the G7.

This summer, the German and European anti-coal movement will take the fight to a new level. A coalition of grassroots groups and NGOs have called for a mass act of civil disobedience that is intended to bring operations in the Rhineland coalfields – the biggest source of Europe’s CO2 emissions – to a halt.

From Aug. 14 to 16, hundreds of people from across Europe plan to enter an open-pit lignite mine with many more standing outside the mine in solidarity. Under the banner Ende Gelände, which translates into ‘this far and no further’, they will aim to block the mining infrastructure.

During the G7 summit, four people already showed that it can be done when they scaled one of the monstrously huge excavators and stopped work in the mine for two days.

The action this summer is part of a growing and diverse movement against lignite mining, ranging from local citizens’ initiatives against poisonous air pollution, to fights for divestment and the occupation of an old-growth forest that stands to be cleared for the extension of the mines.

Those participating in the discussion in Mayence were convinced that this upcoming action in August is a moral imperative.

“Of course, it’s illegal but civil disobedience is our emergency brake,” said one. “If people thirty years from now were to ask us what we did to prevent the mass extinction of species, heat waves, crop failures, the melting of glaciers and wildfires, can we say: I could have stopped coal mining, but I didn’t because there was a sign saying ‘No Trespassing’?”