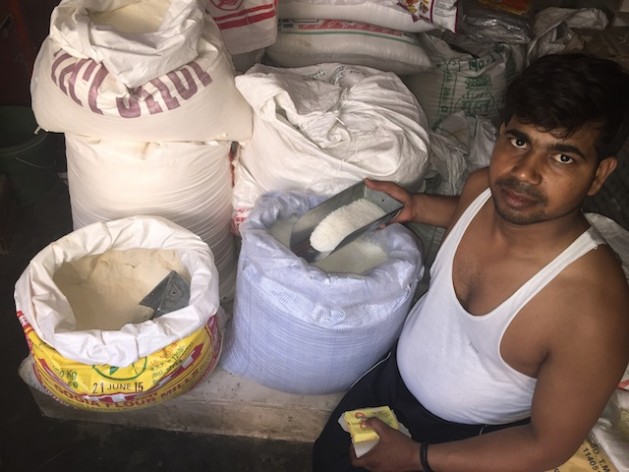 With a network of 60,000 ration shops, India’s public food distribution system is mired in corruption and inefficiency, leaving millions starving while tonnes of grain rot in storage. Credit: Neeta Lal/IPS

NEW DELHI, Jul 1 2015 (IPS) - Chottey Lal, 43, a daily wage labourer at a construction site in NOIDA, a township in the northern Indian state of Uttar Pradesh, is a beleaguered man. After a gruelling 12-hour daily shift at the dusty location, he and his wife Subha make barely enough to feed a family of seven.

Nor is the couple ever able to procure the subsidized rations they are legally entitled to, under a government law, from their local fair price shop.

"I usually disappear at meal times from home, as it’s heart-wrenching to see so many people parcel out so little food among themselves. I now beg for food, though I live with my sons." -- Savirti, a 50-year-old woman who is cut off from India's public food distribution system
“Whenever we go to the outlet, we’re shooed away by the grocer saying stocks have run out. We end up buying expensive food from the market, which isn’t enough to feed the entire family. Everybody knows the shopkeeper is profiteering from selling grain on the black market. But what can we, the poor, do? We’ve complained at the local police station also, but no action has been taken against the vendor,” Lal told IPS.

Both women, who are widows and live with their married sons, are dependent on their families for food and a roof over their heads. However, they have been reduced to beggary as the family income is meagre and the grain rations they receive from the fair price shops are barely enough to feed half the family.

“I usually disappear at meal times from home, as it’s heart-wrenching to see so many people parcel out so little food among themselves. I now beg for food, though I live with my sons,” Savitri told IPS.

Kamla similarly feels she “eats better outside the home than inside” due to strangers’ kindness.

Engulfed in corruption, leakages and inefficiency, India’s public food distribution system (PDS) – a network of about 60,000 fair price shops around this country of 1.2 billion people – is depriving millions of poor people of the food grain they are entitled to under the National Food Security Act (NFSA).

Essential commodities like rice, wheat, sugar, and kerosene are supposed to be supplied to the public through this network at a fraction of the market rates.

The NFSA aims to sustain two-thirds of the country’s population by providing 35 kg of subsidised food grains per person per month at one to three rupees (0.01 to 0.04 dollars) per kilo.

However, only 11 states and Union Territories (UTs) have so far implemented the law, which was passed by Parliament in September 2013. The rest of the 25 states or UTs have not implemented it yet.

To make matters worse, national surveys have highlighted how millions of tonnes of grain are siphoned off from the distribution system by unscrupulous merchants.

They sell this loot in the open market at high profits, or export it in collusion with corrupt officials from the state-run Food Corporation of India. Much of the food from the PDS is also diverted to neighbouring countries like Nepal, Burma, Bangladesh and Singapore.

The Justice D. P. Wadhwa Committee, which was tasked by the Supreme Court of India with monitoring its orders in a public interest litigation case on the right to food in 2006, recently came out with a damning indictment of the PDS.

Investigating irregularities in the chain’s distribution, the committee revealed that 80 percent of the corruption in distribution happens even before supplies reach the ration shops.

Worse, nearly 60 percent of the food that is channeled through the public distribution system is either wasted or siphoned off in transit. “What reaches the poor beneficiaries is often not even fit for consumption,” explains food expert Devinder Sharma who helms the New Delhi-based collective, Forum for Biotechnology & Food Security. Malnourished kids run around outside a ration shop in India. The lettering on the side of the building is part of an advertisement by a multinational telecom company, peddling cheap phones in the country that hosts the world’s largest population of hungry people. Credit: Neeta Lal/IPS

This rampant and systemic abuse in the delivery chain augurs ill for a country like India, home to 194.6 million undernourished people, the highest in the world, according to the recent annual report by the Food and Agriculture Organisation (FAO) of the United Nations.

The report states that the numbers translate as over 15 percent of the country’s population, exceeding China in both absolute numbers and the proportion of malnourished people in the country.

“Higher economic growth has not been fully translated into higher food consumption, let alone better diets overall, suggesting that the poor and hungry may have failed to benefit much from overall growth,” says the 2015 State of Food Insecurity in the World about India.

Close to 1.3 million children die every year in India because of malnutrition, according to the World Health Organisation (WHO). The prevalence of underweight children in India is among the highest in the world, and is nearly double that of sub-Saharan Africa, with dire consequences for mobility, mortality, productivity and economic growth, states the WHO.

In a bid to tackle the problem of chronic hunger, the Shanta Kumar Committee, tasked with a review of the PDS in India, submitted a report to Prime Minister Narendra Modi earlier this year, recommending a gradual phasing out of the PDS and a move to cash transfers.

The proposed cash transfer, according to the committee, will whittle down poor beneficiaries’ reliance on PDS ration shops. Some experts have buttressed this idea with the argument that dismantling the food procurement system, by providing coupons or food entitlements in the form of cash to the beneficiaries and allowing them to buy their own quota from the market, is a far more foolproof system.

The belief is that if the people are given the subsidy directly, both the government and the consumers will benefit.

Each year India’s granaries burst with bumper harvests of wheat and rice, but the grain is either pilfered by middlemen or allowed to rot in the rain while millions starve.

The government also incurs a huge expenditure on the food grains it supplies through the system. The leakage of food grains supplied to the PDS is as high as 48 percent, say surveys, and the buffer stocks it maintains are often far above the requirement, leading to huge costs on maintenance.

Ironically, the PDS is one of the largest programmes in India aimed at social welfare of the poor. Renowned economist Jean Drèze has argued that the impact on poverty reduction can be considerable if the PDS works efficiently.

Currently, close to 23 percent of India’s people live on less than 1.25 dollars a day – an arbitrary line that the Asian Development recently found to be an inadequate measure of poverty, suggesting that a line of 1.51 dollars would better reflect the sum required to keep a person at a minimum standard of existence.

Regardless of how extreme poverty is measured, it is clear that millions in this country are at, or very close, to, the point of starvation every single day.

Experts like Dr. Ravi Khetrapal, an agricultural scientist formerly with the Ministry of Food and Civil Supplies, believe the PDS to be an essential component of Indian society because the prevailing market prices for essential commodities are beyond the reach of the downtrodden.

“If the poor don’t access this network, they will starve to death,” he told IPS. “The network can play a more meaningful role if it is streamlined to ensure micro-level success and availability of food grains for all poor households.”

India has an impressive list of programmes to fight hunger, and the budget allocation for these is increased every year, and yet the poor go hungry. In fact, according to U.N. data, the number of impoverished people in the country is increasing with every passing year.

The answer does not lie in dismantling the PDS system, but reforming the world’s largest food delivery system to cleanse it of corruption, and make it more effective.

“This is certainly possible, but given the extent of political meddling – from the allotment of ration shops to transportation of grains – it has never been attempted in earnest. We need to build a system that ensures food for all at all times. This is what constitutes inclusive growth. A hungry population is a great economic loss,” Sharma told IPS.