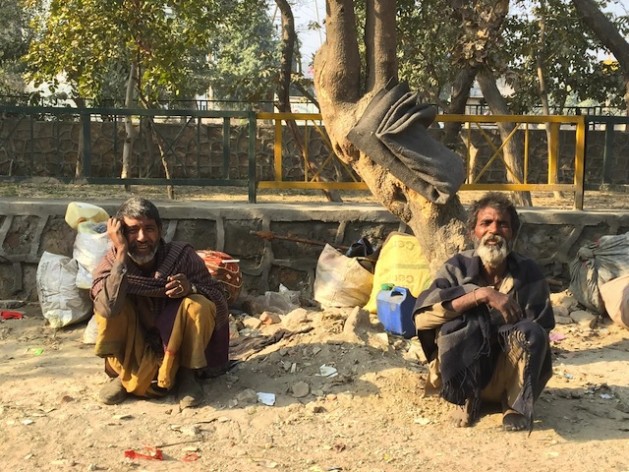 India is home to one-fourth of the world’s poor. Credit: Neeta Lal/IPS

NEW DELHI, Feb 14 2015 (IPS) - Despite being one of the world’s fastest expanding economies, projected to clock seven-percent GDP growth in 2017, India – a nation of 1.2 billion – is trailing behind on many vital social development indices while also hosting one-fourth of the world’s poor.

While the United Nations prepares to wrap up a decade-and-a-half of poverty alleviation efforts, framed through the lens of the Millennium Development Goals (MDGs), by the end of this year, the international community has its eyes on the future.

"A focus on accelerating sustainable, inclusive and balanced growth is key to poverty eradication." -- Ranjana Kumari, director of the Delhi-based non-profit Centre for Social Research (CSR)
The coming development era will be centred on sustainability, driven by targets set out in the Sustainable Development Goals (SDGs). Home to one-sixth of the world’s population, India’s actions will determine to a great extent global efforts to lift millions out of destitution in the coming years.

Experts say its patchy progress on the MDGs offers some insights into how the country will both assist and hold back global development efforts in the post-2015 era.

Earlier this month the U.N. released a report lauding India’s efforts to half the number of poor people living within its borders to the current 270 million since the country joined hands with 189 U.N. member states to draft the MDGs 15 years ago.

While making strides in poverty reduction, India is also on track to achieve gender parity at the primary, secondary and tertiary levels on the education front by the year’s end though it lags significantly on the goal of empowering its women.

“The proportion of women working in decent jobs outside agriculture remains low; their participation in the overall labour force is also low and declining in rural areas; women in farming are constrained by lack of land ownership; and women are poorly represented in parliament,” the U.N. report stated.

The report recommends a continued emphasis on increasing both growth and social spending. However, experts point out this will be a significant challenge against the backdrop of India’s new Hindu nationalist government slashing social sector spending by about 30 percent in the supplementary budget.

The allocation for the National Rural Employment Guarantee Act (NREGA), an initiative to provide employment to all adult members of poor Indian families for five dollars per day, is now the lowest it has been in five years. 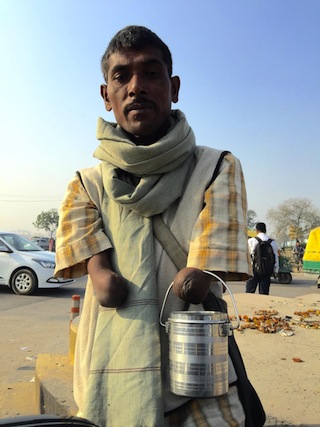 Despite robust economic growth, scenes of destitution are visible all throughout India, a nation of 1.2 billion people. Credit: Neeta Lal/IPS

By the end of last year, state governments had reported a drop of 45-percent in funds allocated by the Centre, from 240 billion to 130 billion rupees (3.8 million to 2.1 million dollars) – the sharpest decline since the scheme’s inception in 2005.

India needs to balance its economic growth while tackling poverty as the latter can considerably erode the progress achieved from high GDP numbers, say economists.

“Removing poverty is clearly the most important of the goals as it has clear linkages to the other MDGs,” Delhi-based economist Parvati Singhal, a visiting professor at Jawaharlal Nehru University, told IPS.

“It needs to be central to the post-2015 development agenda. Higher income resulting from growth is the best panacea for poverty […],” Singhal elaborated.

According to Sabyasachi Kar, associate professor at the Institute of Economic Growth, with the University of Delhi, a major reason for continuing poverty in India is the country’s below-par industrial growth, which scuppers job creation.

“Programmes like NREGA and food-for-work programmes are at best safety nets that will keep people from starving. We need robust growth in the industrial and manufacturing sectors to generate employment and alleviate poverty while raising incomes permanently.

According to a report entitled ‘Effects of Poverty in India: Between Injustice and Exclusion’, “The spectacular growth of cities has made poverty in India more visible and palpable through its famous slums.”

U.N. data shows that 93 million people in India live in slums, including 50 percent of the population in its capital, New Delhi.

Meanwhile, the megacity of Mumbai, home to 19 million, hosts nine millions slum-dwellers, up from six million just 10 years ago.

Dharavi, the second largest slum in Asia, is located in central Mumbai and is home to between 800,000 and one million people, crammed into just 2.39 square kilometres of space.

Investing in women and children: crucial for development

Public health in India is also an area of concern, with the country trailing in the realms of infant and child mortality as well as maternal health.

According to the World Bank India accounts for 21 percent of deaths among children below five years of age. Its maternal mortality ratio (MMR) – the number of women who die during pregnancy, delivery or in the first 42 hours of a termination per 100,000 live births – is 190. Countries like Ecuador and Guatemala fare better than India, with MMRs of 87 and 140 respectively.

Addressing these issues will be a considerable challenge as India is home to 472 million children or about 20 percent of the world’s child population, while nearly 50 percent of its population is comprised of women.

Health activists are advocating for greater capital investment in public health. India currently spends an abysmal one percent of its GDP on health, half the sum allocated by neighbouring China.

Even Russia and Brazil, two other nations in the BRICS association of emerging economies of which India is a part, invest 3.5 percent of their respective GDPs on health.

The activist feels that growth and development should not only be measured in GDP terms but also in terms of per capita income and per capita spending.

“Right now, there is inequitable distribution of wealth in India. Money is concentrated in the hands of a few while the masses struggle to get two square meals a day. This inequity needs to be addressed as there’s no conflict in the growth of social justice and GDP growth; both ought to work in tandem for success.”

Speaking at the launch of the U.N. report on India last week, Shamshad Akhtar, under-secretary-general of the U.N., advocated for a new sustainable agriculture-based green revolution, which could contribute to ending hunger not only in India but across South Asia at large.

With eight percent of India’s population engaged in agriculture, amounting to some 95.8 million people, sustainable development will be impossible without lifting India’s farmers out of poverty, researchers contend.