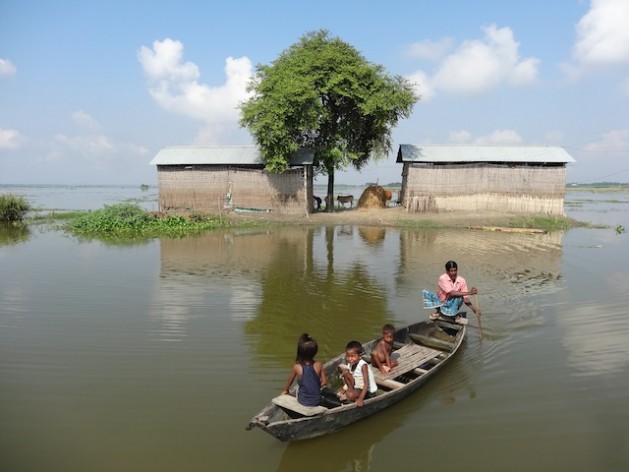 When isolated by floodwaters, families have no choice but to use boats for transportation; even children must learn the survival skill of rowing. Here in India’s Morigaon district, one week of rains in August affected 27,000 hectares of land. Credit: Priyanka Borpujari/IPS

MORIGAON, India, Oct 7 2014 (IPS) - The northeastern Indian state of Assam is no stranger to devastating floods. Located just south of the eastern Himalayas, the lush, 30,000-square-km region comprises the Brahmaputra and Barak river valleys, and is accustomed to annual bouts of rain that swell the mighty rivers and spill over into villages and towns, inundating agricultural lands and washing homes, possessions and livestock away.

Now, the long-term impacts of such natural disasters are proving to be a thorn in the side of a government that is racing against time to meet its commitments under the Millennium Development Goals (MDGs), a set of poverty reduction targets that will expire at the year’s end. 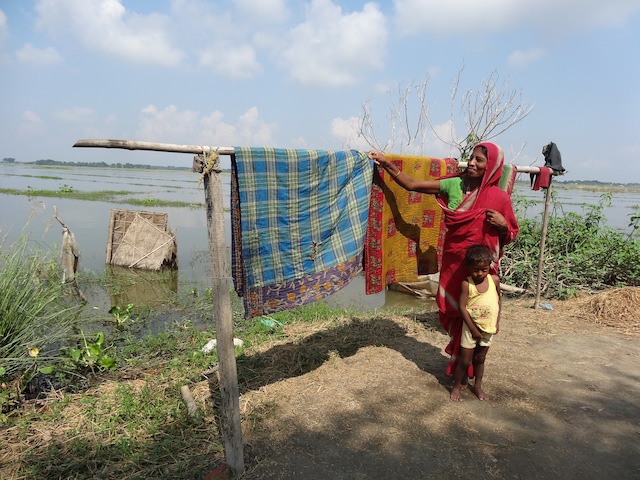 A woman dries blankets after her home went underwater for five days in one of the villages of the Morigaon district. The woven bamboo sheet beyond the clothesline used to be the walls of her family’s toilet. August rains inundated 141 villages in the district. Credit: Priyanka Borpujari/IPS

Target 7C of the MDGs stipulated that U.N. member states would aim to halve the proportion of people living without sustainable access to safe drinking water and basic sanitation by 2015.

While tremendous gains have been made towards this ambitious goal, India continues to lag behind, with 60 percent of its 1.2 billion people living without access to basic sanitation. 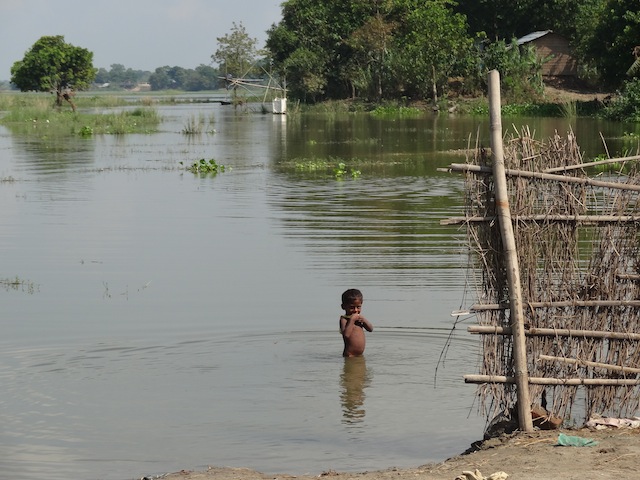 Diving into the river is an easy solution to a lack of bathrooms for children and men, even though the water has been stagnant for about a month. Skin rashes are the most common ailment caused by contact with unclean water, according to village doctors. Credit: Priyanka Borpujari/IPS

Now, recurring floods and other disasters are putting further strain on the government, as scores of people are annually displaced, and left without safe access to water and sanitation. In 2012 alone, floods displaced 6.9 million people across India.

Currently, Assam is one of the worst hit regions. 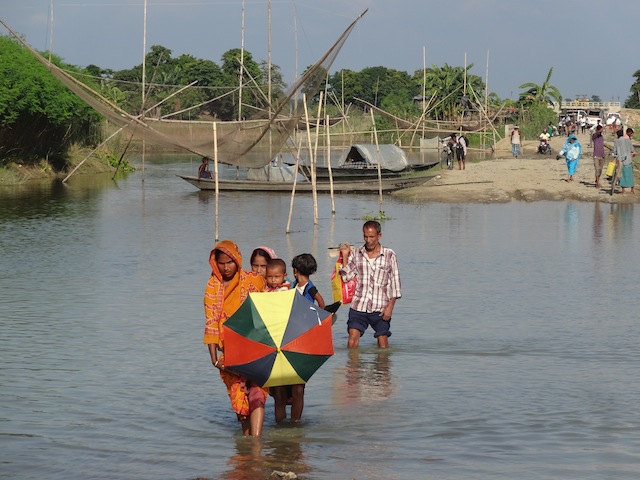 Floods in Morigaon have submerged about 45 roads in the district. Most people wade through the water, believing this is quicker than waiting for a rickety boat to transport them across. Credit: Priyanka Borpujari/IPS

Since May this year, several waves of floods have affected more than 700,000 people across 23 of the state’s 27 districts, claiming the lives of 68 people. 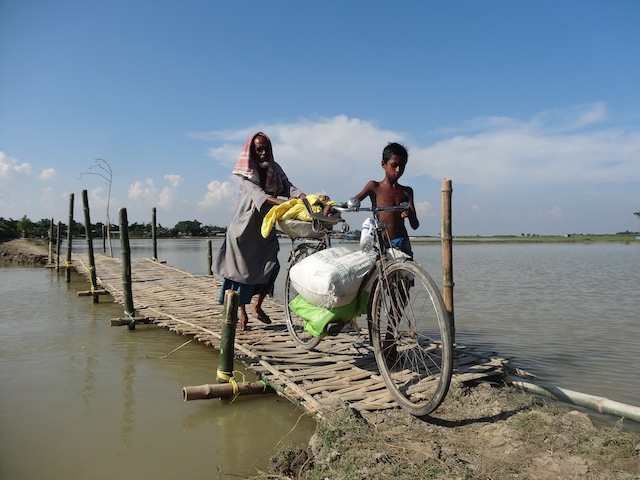 In places where roads have collapsed, the government has erected bamboo bridges. When the government is absent, locals do this work themselves. This man and child travel from one village to another on a boat, and travel by foot over the bridges. Credit: Priyanka Borpujari/IPS

Heavy rainfall during one week of August devastated the Morigaon and Dhemaji districts, and the river island of Majuli. A sudden downpour that lasted two days in early September in parts of Assam and the neighbouring state of Meghalaya claimed 44 and 55 lives respectively. 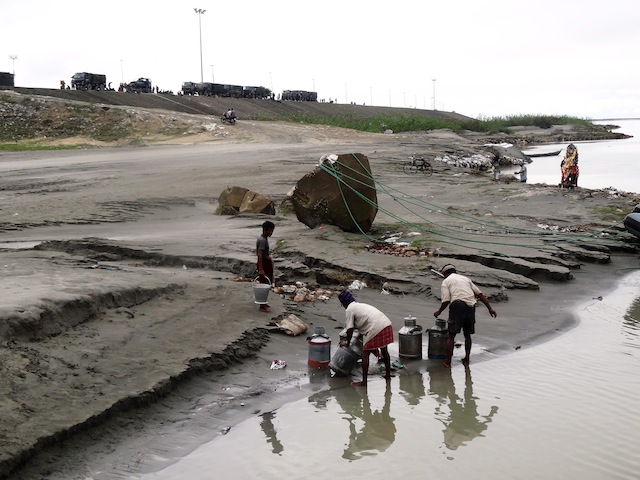 Men transporting milk from Dhemaji to Dibrugarh district across the Brahmaputra River wash their utensils in the river. The lack of hygiene and proper sanitation facilities is a severe concern in flood-affected areas. Credit: Priyanka Borpujari/IPS

The Indian federal government last week announced its intention to distribute some 112 million dollars in aid to the affected population. 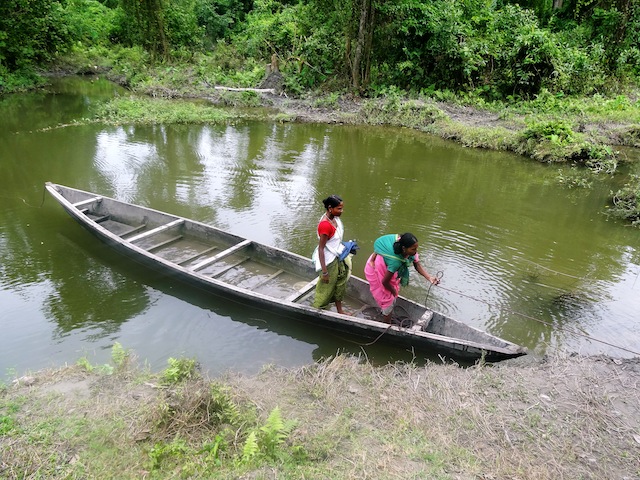 In Dhemaji district, closer to the northeastern Indian state of Arunachal Pradesh, people use a rope boat in the absence of a road. Credit: Priyanka Borpujari/IPS

One of the primary concerns for officials has been the sanitation situation in the aftermath of the floods, with families forced to rig up makeshift sanitary facilities, and women and children in particular made vulnerable by a lack of water and proper toilets. 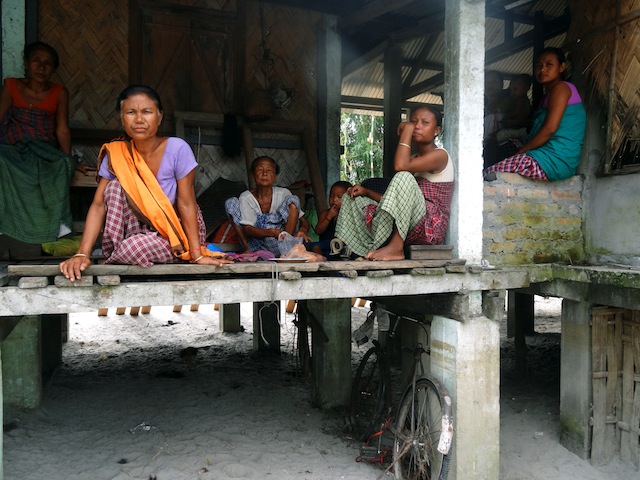 Women from the Mishing community in Dhemaji district are shocked by the siltation caused by the floods. Their homes on stilts – known as chaang ghor – are built on a raised platform. But the sands have submerged the homes in this village by two feet. Credit: Priyanka Borpujari/IPS

Directly following the floods, the ministry of drinking water and sanitation advised the public health and engineering department of the Assam government to “urgently” make provision for such disasters, particularly ensuring safe water for residents in remote rural areas. 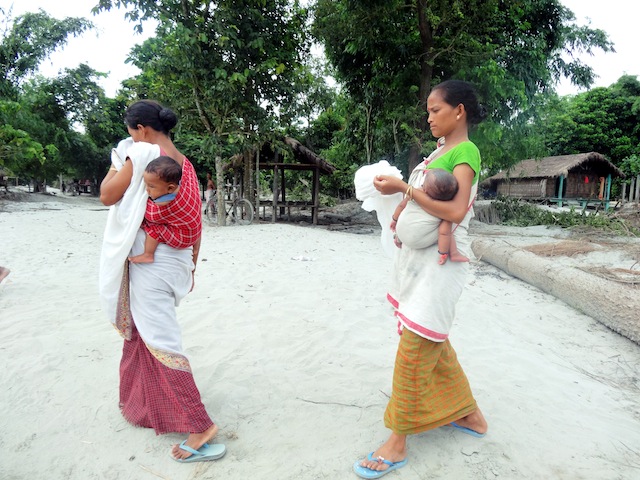 Women from Rekhasapori village in Dhemaji district walk on the hot sand towards a health camp set up by Save The Children. Most people complain of rashes, and acidity from acute hunger. Credit: Priyanka Borpujari/IPS

Among other suggestions, the ministry recommended the “hiring of water tankers for emergency water supply to affected sites […], procuring of sodium hypochlorite, halogen tablets and bleaching powder for proper disinfection [and] hiring of sufficient vehicles fitted with water treatment plants to provide onsite safe drinking water.” 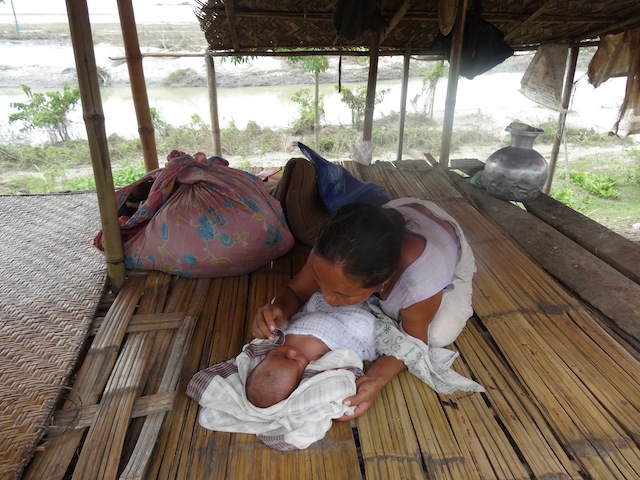 Mohini Pait delivered her daughter on the day after floods in the Rekhasapori village of Assam state washed her house away. She and her baby are currently living in one of many relief camps that dot the roads in flood-affected areas throughout Assam. Credit: Priyanka Borpujari/IPS

In Morigaon and Dhemaji, families are slowly trying to pick up the pieces of their lives, but experts say unless proper disaster management measures are put in place, the poorest will suffer and floods will continue to erode India’s progress towards the MDGs.