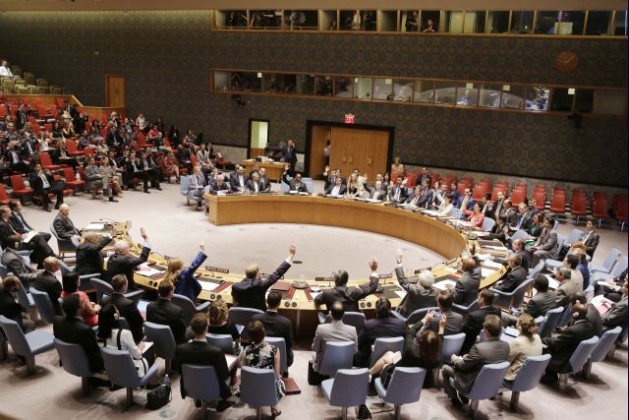 The Security Council unanimously adopts resolution 2231 (2015), following the historic agreement in Vienna last week between the E3+3 (France, Germany and the United Kingdom, as well as the European Union; plus China, Russia and the United States) on one hand, and Iran, on the other, on a Joint Comprehensive Plan of Action (JCPOA) regarding Iran’s nuclear programme. Credit: UN Photo

UNITED NATIONS, Jul 20 2015 (IPS) - When all 15 members of the Security Council raised their collective hands to unanimously vote in favour of the recently-concluded nuclear agreement with Iran, they were also defying a cabal of right-wing conservative U.S. politicians who wanted the United Nations to defer its vote until the U.S. Congress makes its own decision on the pact.

By U.N. standards, in a relatively early morning nine a.m. vote on Monday, the Security Council gave its blessings to the international agreement crafted by its five permanent members – the United States, Britain, France, China and Russia, plus Germany (P5+1) – which was finalised in Vienna last week after months of protracted negotiations.

“Some people just can't accept the fact that we are in an increasingly pluralistic and complex world in which the United States simply cannot assert its will whenever and wherever it feels like." -- Stephen Zunes

Stephen Zunes, professor of politics and Coordinator of Middle Eastern Studies at the University of San Francisco, told IPS the United States is the only one of the seven signatory countries (P5+1 and Iran) where there is serious opposition to the agreement, which a broad cross-section of strategic analysts worldwide recognise as the best realistically possible.

“Some people just can’t accept the fact that we are in an increasingly pluralistic and complex world in which the United States simply cannot assert its will whenever and wherever it feels like,” he added.

Successful negotiations require compromises from both sides rather than simply capitulation by one side, said Zunes, who has written extensively on the politics of the Security Council.

U.S. Secretary of State John Kerry, one of the prime negotiators of the agreement, responded over the weekend to demands by some U.S. Congressmen that the United States should take political and diplomatic precedence over the United Nations – even on an agreement that was international, not bilateral.

“It’s presumptuous of some people to suspect that France, Russia, China, Germany and Britain ought to do what the (U.S.) Congress tells them to do,” he said during a TV interview.

“They have the right to have a vote,” he said, “but we prevailed on them to delay the implementation of that vote out of respect for our Congress, so we wouldn’t be jamming them,” Kerry added.

According to the New York Times, Senator Bob Corker, Republican of Tennessee, chairman of the Senate Committee on Foreign Relations, and Senator Benjamin Cardin of Maryland, a ranking Democrat on the panel, sent a joint letter to President Barack Obama last week asking him to postpone the Security Council vote until the U.S. Congress has taken its own decision.

Norman Solomon, executive director of the Washington-based Institute for Public Accuracy, told IPS “it’s often a difficult concept to get across to many members of Congress, but the U.S. government can’t run the world — and sometimes official Washington can’t even run the U.N. Security Council.”

This comes as a shock, or at least an affront, to Republicans and quite a few Democrats on Capitol Hill who may never use the word hegemony but fervently believe that the U.S. is a light onto all nations and should not hide that light under such a dubious bushel as international law, he pointed out.

“In this case, it’s hard to know whether to laugh or scream at the dangerous U.S. congressional arrogance that is seeking to upend the Iran deal,” said Solomon, who is also founder and coordinator of RootsAction.org, an online action group with some 600,000 active supporters.

Historically, U.S. government policies have been responsible for a great deal of nuclear proliferation in the world, he said.

“Washington still won’t officially acknowledge that Israel now possesses nuclear weapons, and U.S. leaders have turned aside from any and all proposals to seek a nuclear-weapons-free zone in the Middle East,” said Solomon.

On Monday, the 28-member European Union (EU) also approved the Iran nuclear deal paving the way for the lifting of Europe’s economic sanctions against Tehran.

“It is a balanced deal that means Iran won’t get an atomic bomb,” said French Foreign Minister Laurent Fabius. “It is a major political deal.”

The permanent representative of Britain to the United Nations, Ambassador Matthew Rycroft, expressed similar sentiments Monday when he said “the world is now a safer place in the knowledge that Iran cannot now build a nuclear bomb.”

Solomon told IPS the United States is among the leading countries that have promulgated commercial nuclear power in dozens of nations, steadfastly denying the reality that nuclear energy for electricity generation is a major pathway for the development of nuclear weapons.

“We have seen no acknowledgement of this fact in Washington’s high places, let alone steps to move the world away from such dangerous nuclear-power extravaganzas,” he said.

The Iran nuclear agreement now on the table is one of the few big diplomatic achievements that the Obama administration can legitimately claim some credit for, he argued.

But many of the most chauvinistic forces in Washington, he noted, are now doing their best to undermine it.

“In the context of the United Nations, as well as in political arenas of the United States, this dynamic should be fully recognised for what it is — a brazen attempt by, frankly, warmongers in the U.S. Congress to rescue their hopes for war with Iran from the jaws of a peaceful solution.”

After the vote, Secretary-General Ban Ki-moon said Security Council Resolution 2231, adopted Monday, will ensure the enforcement of the Joint Comprehensive Plan of Action (JCPOA) on the Iran nuclear agreement.

He said it establishes procedures that will facilitate the JCPOA’s implementation, enabling all States to carry out their obligations contained in the Agreement.

“The resolution provides for the eventual removal of all nuclear-related sanctions against Iran. It guarantees that the International Atomic Energy Agency will continue to verify Iran’s compliance with its nuclear-related commitments under the JCPOA.”

The United Nations, he assured, stands ready to provide whatever assistance is required in giving effect to the resolution.

Zunes told IPS as nuclear treaties between the United States and the Soviets demonstrated, you can be geopolitical rivals and strongly oppose the other’s system of government and still recognise there is such a thing as a win/win solution on arms control.

Most agreements regarding nuclear weapons have required reciprocity, but none of Iran’s nuclear-armed neighbours — Israel, Pakistan, or India — will be required to eliminate or reduce their weapons or become open to inspections despite the fact that they continue to be in violation of U.N. Security Council resolutions regarding their nuclear programmes, he added.

And none of the other nuclear powers, including five of the six nations that led the negotiations, will be required to reduce their arsenals either.

“Any notion that Iran could somehow be gaining an unfair advantage through this agreement is utterly absurd,” declared Zunes.