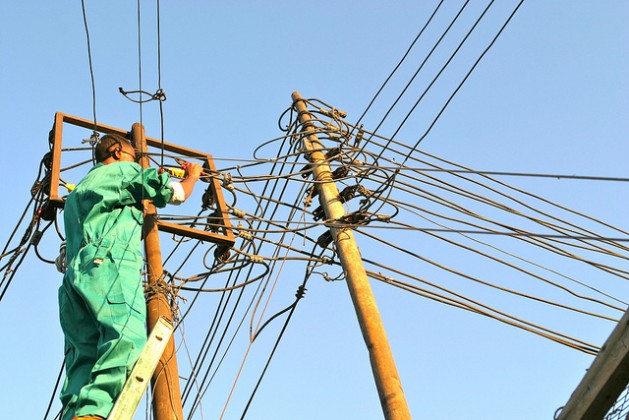 An electricity pylon in Somaliland being repaired by Edwin Mireri. Credit: IPS

CAPE TOWN, Jul 14 2015 (IPS) - Sub-Saharan Africa is still far behind in its ability to generate electricity, hampering growth and frustrating its ambitions to catch up with the rest of the world.

All of sub-Saharan Africa’s power generating capacity is less than South Korea’s, and a quarter of it is unproductive at any given moment because of the continent’s aging infrastructure. The World Bank estimates that blackouts alone cut the gross domestic products of sub-Saharan countries by 2.1 percent.

This dismaying picture was echoed in the annual report of the Africa Progress Panel, released in June. Former U.N. Secretary General Kofi Annan heads the panel. The report foresees electricity coming to all homes and businesses in Africa – by 2080.

Graca Machel, a member of the panel and the former wife of Nelson Mandela, said she was taken aback by the prospect of a 65-year wait for electricity. The report also estimated that an investment of 55 billion dollars would be needed yearly to achieve universal access.

“African countries do not have to lock into high-carbon old technologies; we can expand our power generation and achieve universal access by leapfrogging into new technologies,” he said.

However, he cautioned that Africa’s energy challenge was substantial. “Over 600 million people still do not have access to modern energy. It is shocking that Sub-Saharan Africa’s electricity consumption is less than that of Spain and on current trends it will take until 2080” to catch up.

Modern energy also means clean cooking facilities that don’t pollute household air, he went on. “An estimated 600,000 Africans die each year as a result of household air pollution, half of them children under the age of five. On current trends, universal access to non-polluting cooking will not happen until the middle of the 22nd century.”

Africa has enormous potential for cleaner energy – natural gas and hydro, solar, wind and geothermal power – and should seek ways to move past the damaging energy systems that have brought the world to the brink of catastrophe.

The waste of scarce resources in Africa’s energy systems remains stark and disturbing. Current highly centralised energy systems often benefit the rich and bypass the poor and are underpowered, inefficient and unequal.

“It is indefensible that Africa’s poorest people are paying among the world’s highest prices for energy: a woman living in a village in northern Nigeria spends around 60 to 80 times per unit more for her energy than a resident of New York City or London,” he declared.

“Changing this is a huge investment opportunity. Millions of energy-poor, disconnected Africans, who earn less than US 2.50 a day, already constitute a US 10-billion yearly energy market.”

The panel is an advocacy group which lobbies for sustainable development in Africa and which was originally established to monitor whether the world’s leaders were meeting their commitments to Africa.