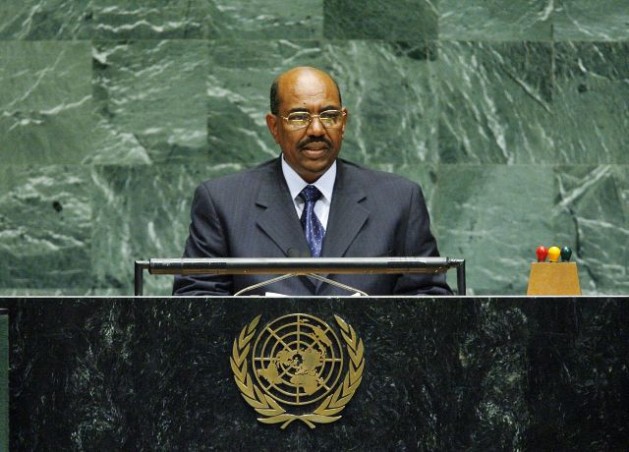 UNITED NATIONS, Aug 7 2015 (IPS) - As part of a politically-amusing annual ritual, the guessing game is on at the United Nations: will he, or will he not, address the General Assembly, along with more than 150 heads of state who are due in New York next month?

Sudan’s President Omar Hassan al-Bashir, who has been indicted on war crimes charges by the International Criminal Court (ICC), is reportedly toying with the idea of defying the international community once again – as he did in South Africa in June — and appearing before the U.N.’s highest policy making body when it begins its general debate, come Sep. 28.

“Even though we’re not a party to the Rome statute of the ICC, we have strongly supported the ICC’s efforts to hold accountable those responsible for war crimes and crimes against humanity and genocide in Darfur. So I’ll just leave it at that.” -- U.S. State Department deputy spokesperson Mark Toner

This will be his third attempt to address the General Assembly, the last two being aborted.

However, his proposed visit to New York this time has been accompanied, as usual, by a rash of widespread rumours: will he be arrested on his way from the airport and handed over to the ICC? Does the United States, which is not a party to the ICC statute, have the legitimate right to do so?

“A visit by al-Bashir to the U.N. would not only be an affront to Darfuri victims, but a brazen challenge to the U.N. Security Council, which was responsible for sending Darfur to the ICC for investigation in the first place in 2005,” she added.

Still, will the U.S. Embassy in the Sudanese capital of Khartoum provide him with an entry visa which the United States has rarely denied to visiting heads of state because it is mandated to facilitate the working of the United Nations under what is called the Headquarters Agreement with the host country?

But so far neither the United Nations nor the U.S. State Department is willing to provide any answers.

Asked about the proposed visit, Mark Toner, the U.S. State Department’s deputy spokesperson told reporters: “We’ve seen reports that President Bashir plans to speak at the U.N. summit in September – Summit for Development. We don’t have any further information at this time.”

“We can’t, frankly, talk about individual visa cases or disclose any details from it. We’re prohibited by law from doing so,” he said.

More broadly, “Even though we’re not a party to the Rome statute of the ICC, we have strongly supported the ICC’s efforts to hold accountable those responsible for war crimes and crimes against humanity and genocide in Darfur. So I’ll just leave it at that.”

Asked if the Sudanese president will be arrested if he arrived in New York, Toner said: “Again, I’m not going to get out and speak to hypotheticals. We haven’t received any word that he’s intending to go there. And frankly, if we did, I couldn’t speak to it from here. Sorry about that.”

Addressing the U.N.’s Legal Committee last year, Hassan Ali, a senior Sudanese diplomat, told delegates, “The democratically-elected president of Sudan, Omar Hassan Al-Bashir, had been deprived of the opportunity to participate in the General Assembly (last year) because the host country, the United States, had denied him a visa, in violation of the U.N.-U.S. Headquarters Agreement.”

A denial of a U.S. visa amounts to violations of specific international agreements such as the Vienna Convention on Diplomatic Relations of 1961, and particularly the U.N. Headquarters Agreement, entered into by the U.S. and the U.N. in 1947 and unanimously ratified by Congress.

In response to the U.S. refusal to grant a visa to Palestinian leader Yassir Arafat in 1988, the General Assembly had to move its meeting to Geneva at huge expense and inconvenience.

In June al-Bashir, in complete defiance of the international community, participated in an African Union (AU) summit meeting in Johannesburg, South Africa.

But he left the country hours before a South African court issued an interim order to prevent the president from leaving the country.

“Well, I don’t speak on behalf of the ICC, but what is clear and what the Secretary-General has said repeatedly is that he believes that the Member States of the U.N. system need to take the warrant issued by the International Criminal Court seriously, and, of course, as you know, there are relevant resolutions of the Security Council also about this matter, which we expect the Member States will abide by.”

“And we’ll have to see how that goes. But certainly, we have continued to treat the matter of the ICC prosecutions regarding Darfur seriously, and we believe all Member States should do so,” he added.

Pressed further on the issue of a U.S. visa, Haq said the basic understanding is that the Heads of State and Government who come for the general debate will be able to come to the United States in order to speak (at the U.N.)

“As you know, there have been some disputes about this over the years, but the general rule has been that,” he noted.

Asked if the United States could refuse a visa and not let him into the country, or arrest him at the airport, even though the U.S. is not a signatory to the ICC, Haq said: “That would essentially be a matter to ask the United States Government… I wouldn’t comment on what they may or may not do.”

Asked if it is his understanding that immunity would attach to all Heads of State in transit between the arrival point in the United States and the U.N. Headquarters, Haq said, “It is basically a question based on a speculative question, so I wouldn’t go further on that realm of speculation.”

“Regarding the issue of immunity, that is covered in a number of treaties including the Vienna Conventions, and I would just refer you to those,” he said.