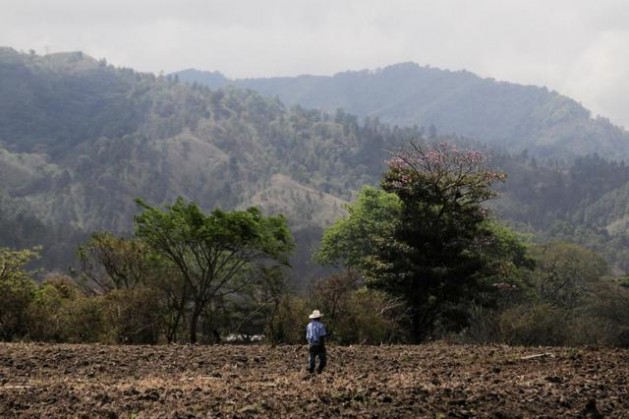 A Honduran peasant on his small farm. Two-thirds of rural families in Central America depend on family farming for a living. Credit: Neil Palmer/CIAT

MANAGUA, Aug 27 2015 (IPS) - Central America’s toolbox to pull 23 million people – almost half of the population – out of poverty must include three indispensable tools: universal access to water, a sustainable power supply, and adaptation to climate change.

These three tools are especially important for agriculture, the engine of the regional economy, and particularly in rural areas and indigenous territories, which have the highest levels of poverty.

Campos stressed that this is the minimum foundation for starting to work “towards addressing other issues that we must pay attention to, like education, health, or vulnerable groups; but first these conditions that guarantee minimal survival have to be in place.”

In Central America today, 48 percent of the population lives below the poverty line. And the region is facing the Post-2015 Development Agenda, which the international community will launch in September, with the concept of survival very much alive, because every day millions of people in the region struggle for clean water and food.

Everyone agreed on the vulnerability of the region and its people at the Central American meeting “United in Action for the Common Good”, held Aug. 21 in the Nicaraguan capital to assess the Post-2015 Development Agenda and the Sustainable Development Goals (SDGs).

The 17 SDGs are the pillar of the agenda and will be adopted at a Sep. 25-27 summit of heads of state and government at United Nations headquarters in New York, with a 2030 deadline for compliance.

The issues of reliable, sustainable energy, availability and sustainable management of water, and urgent action to combat climate change and its impacts are included in the SDGs. But the experts taking part in the gathering in Managua stressed that in this region, the three are interlinked at all levels with the goal of reducing poverty.

“In our countries, our fight against poverty is complex,” Campos said.

This region of 48 million people, where per capita GDP is far below the global average – 3,035 dollars in Central America compared to the global 7,850 dollars – needs to come up with new paths for escaping the spiral of poverty which entraps nearly one out of two inhabitants. 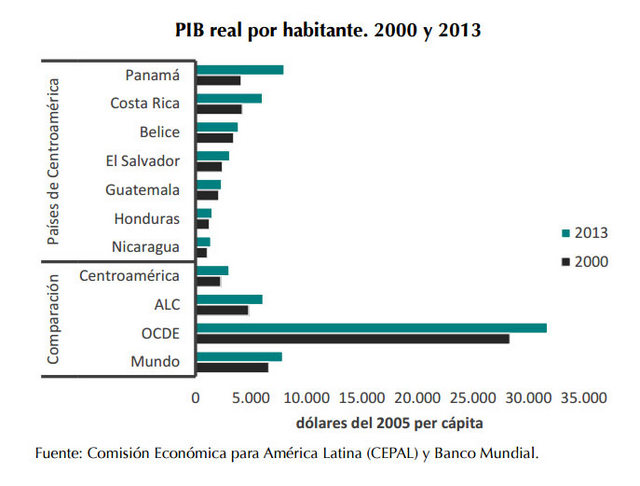 Central America’s GDP improved in real terms in the last 13 years, but remains lower than the Latin American and global averages. Credit: State of the Nation

According to the 2012 report “The Economics of Climate Change in Central America” by the U.N. Commission for Latin America and the Caribbean (ECLAC), “reduction of and instability in the availability of water and of agricultural yields could affect labour markets, supplies and prices of basic goods, and rural migration to urban areas.”

That would have an impact on subsistence crops like maize or beans or traditional export products like coffee, which are essential in the region made up, from south to north, of Panama, Costa Rica, Nicaragua, Honduras, El Salvador, Belize and Guatemala. (U.N. agencies also include the Dominican Republic, an island nation, in the region.)

Poverty laid out in the SDGs

The first of the 17 SDGs is “End poverty in all its forms everywhere” and the second is “End hunger, achieve food security and improved nutrition, and promote sustainable agriculture.”

The sixth is “Ensure availability and sustainable management of water and sanitation for all”, the seventh is “Ensure access to affordable, reliable, sustainable and modern energy for all” and the 13th is “Take urgent action to combat climate change and its impacts.”

A key area is the so-called Dry Corridor, an arid strip that runs from Guatemala to Costa Rica, which according to experts has grown.

“We are modifying land use, which is associated with the climate phenomenon, and as a consequence the Dry Corridor is not limited to the Corridor anymore: we are turning the entire country into a kind of dry corridor,” Denis Meléndez, executive secretary of Nicaragua’s National Forum for Risk Management, told IPS.

The “Outlook for Food and Nutritional Security in Central America” report published by the U.N. Food and Agriculture Organisation (FAO) in 2014 says this could hinder compliance with the goal of eliminating hunger in the region.

The first of the eight Millennium Development Goals (MDGs) adopted by the international community in a global summit in 2000 – now to be replaced by the SDGs – is to eradicate extreme poverty and hunger, cutting in half the proportion of extremely poor and hungry people by 2015, from 1990 levels.

FAO reported that the countries of Central America have come close to meeting the goal, with the proportion of hungry people being reduced from 24.5 to 13.2 percent of the total, but the percentage is still more than double the Latin American average of 6.1 percent.

Meanwhile, the impact of climate change on the most vulnerable people goes beyond agriculture, access to water, or sustainable energy.

According to ECLAC, two out of three inhabitants of the region live in shantytowns or slums in unsanitary conditions, where climate change will drive up the prevalence of diseases associated with poverty, such as malaria and dengue. 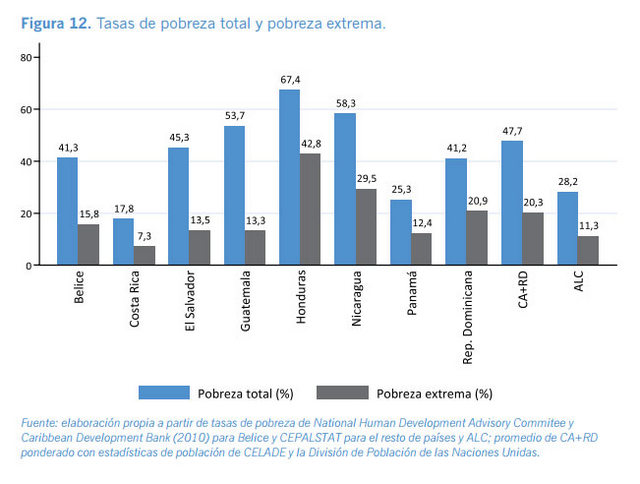 Nearly half of the population of Central America lives in poverty, with Honduras in the most critical situation, with a poverty rate of close to 70 percent. Credit: FAO

“Because climate change is the biggest challenge that humanity is facing at the present and in the coming decades, we have to think about adaptation not necessarily as a cross-cutting issue, but in terms of ‘what goes around, comes around’,” Francisco Soto, the head of El Salvador’s Climate Change Forum, told IPS.

This impact has been acknowledged by governments in the region, and in 2010 the Central American Integration System (SICA) described it in its Regional Climate Change Strategy as a phenomenon that would “make social challenges like poverty reduction and governance more difficult to fight.”

Experts like Andrea Rodríguez of Bolivia stressed at the meeting that every government anti-poverty project should take into account the impacts of climate change.

“If this is not taken into consideration, we won’t be able to find an effective solution, because climate change and development are like twins – they go hand in hand and have to be addressed simultaneously in order for aid and cooperation to be effective,” she told IPS.

Rodríguez, a legal adviser to the Interamerican Association for Environmental Defense (AIDA) Climate Change Programme, insisted on the need to jointly plan long-term investment in energy infrastructure and sustainable development.

“The only way to combat climate change and contribute to economic development is by leaving aside fossil fuels and looking for cleaner alternatives,” she said.

Civil society organisations grouped in the Central American Alliance for Energy Sustainability (ACCESE) propose small-scale renewable installations as a solution for meeting the growing demand for energy while at the same time empowering vulnerable communities.

In the region, 15 percent of the population does not have electricity, and up to 50 percent cook with firewood, according to figures provided by ACCESE. This portion of the population is mainly found on islands and in remote mountainous and rural areas.