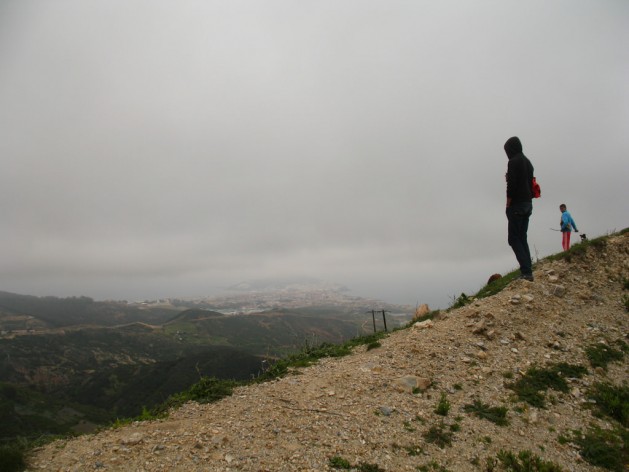 Migrants looking down from the mountain behind the Spanish enclave of Ceuta in Morocco. Credit: Andrea Pettrachin/IPS

CEUTA, Sep 4 2015 (IPS) - In the middle of the mountains behind the border fence of Ceuta, the Spanish enclave in Morocco, and eight kilometres from the nearest Moroccan village of Fnideq, an uncertain number of migrants live in the woods. No one knows exactly how many they are but charity workers in Melilla, Spain’s other enclave in Morocco, say they could be in their thousands.

Ceuta is one of the main (and few) ‘doors’ leading from northern Africa to the territory of the European Union, and is a ’door’ that has been closed since the end of the 1990s, when the Spanish authorities started to build a tripe six-metre fence topped with barbed wire that surrounds the whole enclave, as in Melilla.

In the past, those waiting in the mountains for their turn to try to reach Spain had been able to build something resembling a normal life. They put up tents and at least were able to sleep relatively peacefully at night.

Today, the migrants are forced to remain mostly hidden in small groups among the trees or in small caverns, and they know that all attempts to pass the Spanish border are almost certain to fail and end up with arrest by the Moroccan authorities

That all ended after 2012, when the Moroccan police started to burn down the camps and periodically sweep the mountainside, arresting any migrants they found, charged with having illegally entered the country.

These actions were the result of agreements between the Moroccan and Spanish governments, after Spain had asked Morocco to control migration flows.

The most tragic raid so far by the Moroccan police took place last year on Gurugu Mountain which looks down on Melilla. Five migrants were killed, 40 wounded and 400 removed to a desert area on the border with Algeria. According to the migrants, the wounded were not cured and were left to their own destiny.

Today, the migrants are forced to remain mostly hidden in small groups among the trees or in small caverns, and they know that all attempts to pass the Spanish border are almost certain to fail and end up with arrest by the Moroccan authorities.

They live, in their words, “like animals” and when speaking with outsiders are clearly ashamed by their condition, apologising for being dirty and badly-dressed.

The first thing many of them tell you in French is that they are students and that before having to leave their countries they were studying mathematics, economics or engineering at university.

Many of them are from Guinea, one of the countries most seriously affected by the Ebola epidemic, others come from Cote d’Ivoire, Gambia, Mali, Burkina Faso, all countries characterised by political turmoil of various types.

All of them have been forced to live in these woods for months or even years, waiting for their chance to pass the border fence.

The statistics show that some of them will certainly die in their attempts to reach Spain – either on the heavily fortified fences which encircle the enclaves or out at sea in a small boat or trying to swim to a Spanish beach.

Some of them will finally make it to Spain, perhaps after five or six failed attempts. In that case they will have overcome the first hurdle, escaping the “push-back operations” by the Spanish Guardia Civil, but they will still face the possibility of forced repatriation, particularly if they come from countries with which Spain has a repatriation agreement.

Many of them, however, will finally give up and decide to remain somewhere in Morocco, destined to a life of continuous uncertainty due to their irregular position in the country. You can meet them and listen to their stories in the main Moroccan cities, especially in the north. In most cases, they had escaped death in their attempts to reach Spain and do not want to risk their lives any longer.

Meanwhile a report on ‘Refugee Persons in Spain and Europe” published at the end of May by the non-governmental Spanish Commission for Refugees (CEAR), denounces how sub-Saharan migrants are dissuaded from seeking asylum in Spain, even if coming from countries in conflict such as Mali, Democratic Republic of Congo or Somalia, once they realise that they are likely to be forced to remain for months in a Centre for Temporary Residence of Immigrants (CETI) in Ceuta or Melilla.

In Melilla, for example, those who apply for asylum cannot leave the enclave until a decision has been taken on their application. Unlike Syrian refugees whose application takes no more than two months, CEAR said the average time to reach a decision for sub-Saharan Africans is one and a half years.

The CEAR report is only one of a long list of recent criticisms of the Spanish government’s migration policies from numerous NGOs and international organisations.

The main target of these criticisms has been the Security Law (Ley de Seguridad Ciudadana) passed this year by the Spanish Parliament with only the votes of Prime Minister Mariano Rajoy’s Popular Party. The aim was to give legal cover to the so called devoluciones en caliente, the “push-back operations” against migrants carried out by the Spanish frontier authorities in Ceuta and Melilla in violation of international and European law.

On the Spanish mainland, said the CEAR report, migrant’s right of asylum is seriously undermined by the bureaucratic lengths of application procedures and the political choices of the Spanish authorities.

Calls from CEAR and other NGOs to end “push-back operations” seem very unlikely to be taken into consideration soon by the Spanish government and Parliament, in view of the general elections later this year.