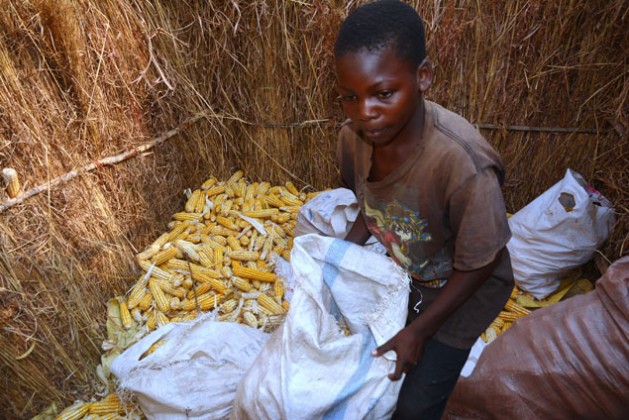 This is a potential sales pitch to Africa’s “youth dividend” to make a living from agriculture, considered a less attractive sector for a career but the mainstay of a number of economies on the continent.

Agriculture is keeping more than 1.1 billion Africans fed but those who produce the food are not young, well resourced, and technologically savvy or with the convincing image to boot. There is growing concern that family farming may fail to keep food on Africa’s tables for long.

Development researchers say unless young people – aged 14 to 24 – are attracted to farming, any financial and technological investments into agriculture will not guarantee food security in Africa.

Young farmers like Beauty Manake, from Botswana, have taken the challenge head on and have found success. Africa needs more farmers like her.

Manake left a career job at 25 and started farming. Today she runs horticulture and a livestock farms, two agriculture enterprises, she says are the best business investments she has ever made.

“The initial motivation for me to go into farming was to make money very fast and in the shortest period of time but now my passion for nurturing a plant from a seedling to a sellable product has surpassed that financial outlook,” Manake told IPS. “I have faced a lot of pressure as young farmer as Africa is faced with ageing farmers, I have to ensure that we intensify the way we farm to fill this gap as the food basket is at risk.”

The quest to end global hunger, achieve food security and improve nutrition while promoting sustainable agriculture is the basis for the new Sustainable Development Goal 2 agreed to by global leaders at the United Nations in New York last September. This goal will be fruitless unless agriculture in Africa is improved to create jobs and attract young farmers.

Hunger, nutrition and sustainable agriculture are key development challenges in Africa. Agriculture employs more than 60 per cent of the population and is a major contributor to the GDP of many African countries as well as keeping entire communities fed.

African farmers, many of whom are smallholders cultivate an average of two hectares of land, are not getting younger to keep pace with the demands of farming.

Anecdotal evidence suggests the average age of farmers in Africa is over 60, bad news for agricultural production given that family farmers who cultivate more than 80 per cent of the arable land are responsible for the bulk of food production on the continent.

But are aging farmers and youth disinterest in farming the real obstacles to food security in Africa?

Jim Sumberg, Agriculturalist and Research Fellow at the Institute of Development Studies at the University of Sussex in Brighton, England, thinks otherwise.

Writing in the Future Agricultures blog, Sumberg argues that claims about an aging farm population, the increasing risk of food insecurity and a lost opportunity to bring young people into agriculture and the evidence on which they are based needs closer scrutiny. Citing the problem of generally poor quality official statistics, especially demographic data in much of Africa, and clarity of the definition of what constitutes a farmer, much more is needed., Sumberg says an analysis into the trends and developments that African agriculture over the last decade is necessary.

“But first and foremost there is a need for vision: what kind of agrifood sector will provide work opportunities for young people (and others) that allow real incomes and capabilities to be enhanced, and at the same time address social equity and exclusion issues? This is the question that policy makers and development professionals – whether they start with a focus on young people or on agriculture – and citizens more broadly urgently need to address,” said Sumberg.

Behind the call for ‘youthing’ African agriculture is the Alliance for the Green Revolution in Africa (AGRA) which at its annual Africa Green Revolution Forum convened in Zambia’s capital, Lusaka, in September 2015, dedicated discussions on the participation of youth and women in agriculture.

The UN Food and Agriculture Organisation says global food production has to increase by at least 60 per cent to adequately feed more than 9 billion people who will be on earth by 2050. Agriculture generates 2.4 trillion dollars for the global economy from the more than one billion people working in the sector around the world, according to figures from FAO and the World Bank.

Africa is enjoying new investor interest thanks to its abundant mineral and natural resources and is home to six of the fastest growing economies but is rapidly urbanising. Nearly 1.3 billion people, currently population of China, will live in cities in Africa in the next 15 years, according to UN-Habitat, the United Nations Programme for Human Settlements.

African agricultural output is valued at more than 280 billion dollars and the sector contributes in excess of 30 per cent of the continent’s GDP, presenting a fresh opportunity to tackle youth unemployment and food insecurity.

Barriers to youth entry into agriculture

Africa has almost 200 million people aged 15-24 making it the youngest continent, according to the African Union which says that 10 million young Africans enter the workforce annually. However, opportunities for them in agriculture are hampered by a combination of factors such as limited access to land, financial credit and improved technologies. In addition young people lack practical skills and basic literacy while social norms largely exclude them from decision-making and vest control in older generations.

Data from the International Labour Organisation’s Global Employment Trends for Youth 2013 indicates that youth unemployment in sub-Saharan Africa is higher than adult unemployment. Youth in SSA are twice as likely to be unemployed than are adults.

Strong research evidence based on demographic and current constraints faced by youths in entering agriculture will build a stronger case for effective policies and continued investment in the sector.

While ensuring food security is strategic, Africa needs to also tackle post harvest losses and reduce food waste, which the FAO estimates to amount to a third of global food production which is equivalent of 1.3 billion tonnes or the amount produced in the whole of the sub-Saharan Africa.

“It is clear that the future of Africa rests in its young people and there is an imperative need to create opportunities for economic growth, skills, prosperity and innovation in the agriculture sector to fight poverty and end hunger,” Majele Sibanda said. “Africa needs evidence based policies that are informed by those who are most affected and the problems that we are dealing with now are the youth who are unemployed and the youth that are uneducated.”

Majele Sibanda said the youth must demand their space in agriculture and make governments listen because participation will not be given on a platter.

As Africa seeks to promote and hopefully implement the new SDGs, could priming policy makers to create conducive policy frameworks and get governments to accelerate investments in agriculture be the seeds for growing the continent’s future food producers? Food for thought.