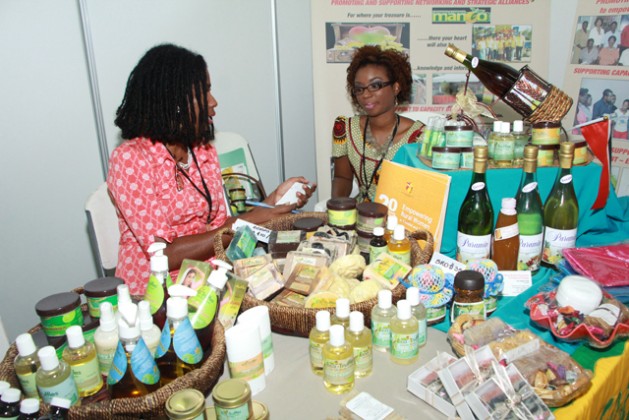 Rural women in agriculture in the Caribbean are getting involved in the manufacture secondary products. Caribbean farmers are reeling from a drop in domestic crop production due to prolonged drought brought about by climate change. Credit: Kenroy Ambris/IPS

Nearly all of the countries in the Caribbean have been experiencing prolonged drought, posing significant challenges to food production in one of the regions most vulnerable to climate change.

“Last year the drought was prolonged over a period of about five months; it affected 18,000 farmers and cost the agricultural sector about 1 billion Jamaican dollars. So climate change through drought has really been a challenge,” Norman Grant, President of the Jamaica Agricultural Society (JAS), told IPS.

Each year the Caribbean imports 5 billion dollars worth of food.

Grant spoke with IPS during an event aimed at developing a business approach for the agri-food sector in Caribbean and other small island states (SIDS) in African Caribbean and Pacific Regions.

The Caribbean and Pacific Agri-Food Forum is organised by the Technical Centre for Agricultural and Rural Cooperation (CTA), together with the Barbados Agricultural Society (BAS) and the Inter-American Institute for Cooperation on Agriculture (IICA), with the support of the Intra-ACP Agricultural Policy Programme.

Jethro Greene, the Chief Coordinator of the Caribbean Farmers Network (CaFAN), said climate change is causing “all kinds of challenges” for the region’s farmers.

“We are trying to get people’s attention drawn to the fact that small farmers are more vulnerable than most and that some of our practices like crop rotation and intercropping are more favourable in terms of environmental practice. So attention must be given to help us cement and improve these practices and build on these practices,” he said.

CaFAN represents farmers in all 15 Caribbean Community (CARICOM) countries. Initiated by farmer organisations across the Caribbean in 2002, it is mandated to speak on behalf of its membership and to develop programmes and projects aimed at improving livelihoods and to collaborate with all stakeholders in the agriculture sector to the strategic advantage of its farmers.

Permanent Secretary, Ministry of Agriculture, Food, Fisheries and Water Resource Management in Barbados, Esworth Reid, said small island states are feeling the effects of climate change and this phenomenon has been impacting negatively on the agricultural sector due to long periods of drought.

“With respect to mitigation against the effects of climate change, the Ministry of Agriculture, Food, Fisheries and Water Resource Management here in Barbados, has been cooperating and working closely with other countries in the Caribbean region through the Caribbean Institute for Meteorology and Hydrology and other regional and international agencies on projects regarding climate change adaptation, early warning systems for climate resilient development and the strengthening of climate information,” he said.

“This is all being done in an effort to enable us and all the other countries involved to be better able to deal with the onset of short term climate hazards such as hurricanes and floods and the effects of long term climate change such as high sea levels and prolong drought,” Reid added.

The Barbados representative for the Inter-American Institute for Cooperation on Agriculture (IICA), Ena Harvey, said climate change impacts represent one of the major challenges for agriculture in the Caribbean.

But Harvey, who is also management coordinator for the Caribbean region, said IICA is focusing a lot on innovation and technology, not just to alleviate the negative impacts of climate change but also to build resilience.

“We are working from the youth right up to the older farmers in introducing greenhouse technology… and looking at new methods of beekeeping.”

For its part, the JAS and ministry of agriculture in Jamaica have implemented measures to reduce the impact of climate change. This includes the distribution of water to farmers.

“We are looking to expand our agro park with irrigation infrastructures and the whole question of rainwater harvesting and the construction of mini dams are some of the areas that we are looking at,” Grant said.

“We are also growing more of our crops using greenhouse technology and hydroponics. So those are some of the strategies that we have implemented to dilute climate change but it is certainly a serious constraint at this time that needs urgent action from the region.”

“The big challenge from our perspective is that a lot of the agricultural issues have not been reflected in the text of the discussions that have been going on so far,” CTA Director Michael Hailu told IPS.

“Agriculture has been fairly low so what we try to do in these kinds of discussions is see how to get the concerns of the farmers and the agricultural community into the negotiations during COP21.”

Hailu said that a lot of the Intended Nationally Determined Contributions (INDCs), especially from the African countries have a strong agriculture component.

Additionally, Hailu said CTA will be represented at COP21 and will organise side events with its partner institutions. He said the negotiators will be invited to these side events to make sure that they are aware of the concerns of the agricultural community and that such issues are actually placed on the table for inclusion in the agreement.

Climate-smart agriculture has been identified as offering major wins for food security, adaptation and mitigation in the Caribbean, but while the UNFCC can establish the international policy framework on how agriculture is incorporated into future climate agreements, much policy development has to occur in national, regional and continental policy arenas.

COP21 will be a crucial conference, as it needs to achieve a new international agreement on the climate, applicable to all countries, with the aim of keeping global warming below 2 degrees C.