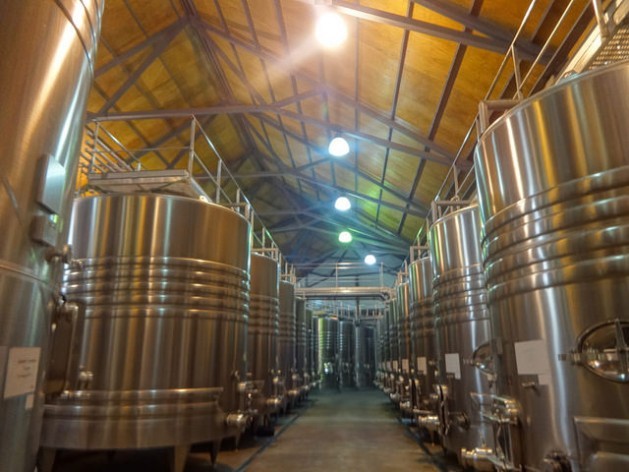 Storage tanks in a winery in the western Argentine province of Mendoza. The distinctive colour of the wine made from malbec grapes, the main kind produced by local winemakers, is starting to change due to the impact of climate change. Credit: Fabiana Frayssinet/IPS

MENDOZA, Argentina, Nov 5 2015 (IPS) - Purple garlic that is losing its color? More translucent wine? Climate change will also affect the flavours of our food in the absence of measures to mitigate the impacts of global warming, which are already being felt in crops that are basic to local economies, such as in the Argentine province of Mendoza.

An exposition by the National University of Cuyo (UNCuyo), during the Climate Change Forum held in October in Mendoza, the capital of the province of the same name, organised jointly with the United Nations Development Programme (UNCP), raised the subject.

“Will climate change affect the quality of malbec?” read one sign at the exposition, referring to Argentina’s most characteristic wine.

“The rise in temperature dulls the color of purple garlic,” says a study by horticulture expert Mónica Guiñazú at UNCuyo’s department of agrarian sciences.

Gastronomic considerations aside, a large part of the economy of this Andean province in west-central Argentina depends on crops like malbec grapes. Winemaking alone represents six percent of the province’s GDP.

“In our regional economy, malbec is the most important variety. That’s why we chose it as an object of study,” said Emiliano Malovini, one of the researchers who carried out a study on “the effect of rising temperatures on the physiology and quality of malbec grapes” by the university’s vegetable physiology section and the National Council on Scientific and Technical Research (CONICET).

In Argentina, “nearly 90 percent of the garlic is produced in Mendoza,” said Guiñazú.

It’s not a question of alarming wine tasters or lovers of garlic, which has proven nutritional and therapeutic properties.

But in the case of malbec, Malovini explained to IPS, “we expect the quality of grapes will decline as a result of the climate change that is projected, as well as what is already happening, the very warm years we have had.”

Malovini cited forecasts by the Intergovernmental Panel on Climate Change (IPCC) of a temperature rise of two to four degrees Celsius in this part of South America by the end of the century. 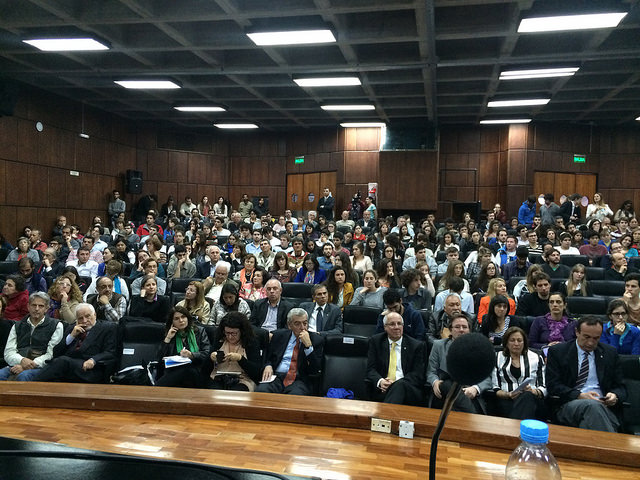 Climate Change Forum held in October in the city of Mendoza, the capital of the western Argentine province of that name, where rising temperatures threaten the flavours of the crops that are a pillar of the regional economy. Credit: Fabiana Frayssinet/IPS

“What has been observed in the preliminary results is a small decline (in quality), mainly in the colour,” he explained, referring to anthocyanins, phytochemicals that play a crucial role in the colour of red wine.

“This is very important because a high-quality, high-end wine for export requires a certain minimal level of colour in the grapes,” he said.

At the same time, “there is another component, the polyphenol content in wine, which gives it ageing potential, to produce wines laid down for two or three years,” he added.

Other changes seen were an increase in alcohol content and a reduction in acidity.

Malovini is studying techniques to counteract the effects of climate change, such as hormone therapy and agricultural practices like restricting irrigation water in vineyards.

Also worried are garlic growers in Mendoza, who make Argentina the world’s third-largest garlic exporter, after China and Spain, in a country where more than half of all exports are agricultural products.

The researchers found that the growing period was up to 10 days shorter, which would in principle be a positive thing, said Guiñazú, because it would make it possible to produce garlic earlier, to supply other markets.

The bad news was that a five degree Celsius rise in temperature – and a 1.5 degree increase in the soil – would spell significant decoloration in purple garlic.

“In Argentina, it doesn’t matter if the colour pales…but in the European Union they put a lot of importance on that. It is penalised,” he said.

According to industry estimates, garlic production generates 10,000 direct and 7,500 indirect jobs, and is a driver of the economy in the wine-producing, mountainous geographical region of Cuyo in west-central Argentina, especially Mendoza and the neighbouring province of San Juan.

Participants in the Climate Change Forum noted that global warming would reduce the water coming from mountain snow melt, fuelling the process of desertification in Mendoza, besides causing more frequent and severe climate events like hail or drought.

“In the last four years a significant water shortage has been seen,” said Daniel Tomasini, UNDP’s coordinator of environment and sustainable development. “Which could form part of the normal variations that have always been seen, or could be the result of climate change.”

“Rivers in Mendoza are expected to see water flows shrink by 15 to 20 percent in the next few years,” he told IPS.

A UNDP report points out that this would affect crop yields and the quality of life of small-scale rural producers.

“Not only regional food security faces a threat, but also the production of food that is distributed to the rest of the country, and is exported,” he said.

That prospect, said Elena Abraham of the Argentine Dryland Research Institute (IADIZA), would increase the social inequality between arid and productive parts of the country.

Outside of the productive areas people mainly depend on subsistence sheep herding and small-scale agriculture, and have historically been neglected by the state.

“We are going to have a desert in the strictest sense of the word,” Abraham told IPS. “The word desert comes, precisely, from ‘to desert’. And people will leave because they won’t have any other option for development – as they are already doing.”

It is the paradox of a region of the developing South that is preparing to mitigate the effects of climate change for which it has virtually no responsibility, but is a direct victim, since experts predict that Mendoza will be one of the provinces hit hardest by the rise in temperatures.

“Climate change is no longer an abstraction,” José Octavio Bordón, president of the UNCuyo Global Affairs Centre, which works on climate change adaptation, said during the forum. “It is the world that my children and their children will live in.”

Argentina is the third biggest Latin American emitter of greenhouse gases and ranks 22nd in the world, accounting for 0.88 percent of the global total, according to the World Resources Institute (WRI).

In its Intended Nationally Determined Contributions (INDCs), Argentina pledged to reduce greenhouse gas emissions by 15 percent by 2030, and said it could increase that goal to 30 percent with international support.

That commitment, considered insufficient by local and international environmentalists, forms part of the INDCs that will be included in the new treaty climate to be approved at the 21st Conference of the Parties (COP21) to the 1992 United Nations Framework Convention on Climate Change (UNFCCC), to be held in Paris in December.

Argentina’s position is that “we are not going to reduce emissions if that generates problems for our people, or for national development, but the goals we have set take this into consideration,” the government’s undersecretary of promotion of sustainable development, Juan Pablo Vismara, told IPS.

“We are worried that absolute obligations will be established (in Paris), such as a quota or an emissions ceiling for us. We must consider that we will have to continue to emit gases, to develop and to fight poverty, but also because we produce food for the rest of the world,” said the high-level official of the secretariat of the environment and sustainable development.