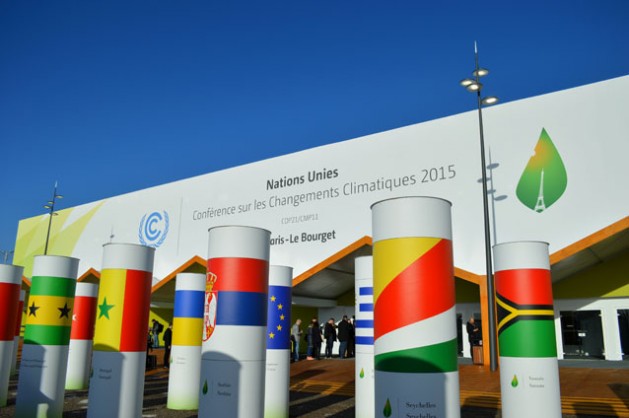 The 21st United Nations Climate Change Conference is hosted in the outskirts of Paris with about 40.000 participants among country delegates, civil society and media. Credit: Diego Arguedas Ortiz/IPS

PARIS, Nov 30 2015 (IPS) - Paris has finally arrived. During the next two weeks, a massive conference centre in the outskirts of the French capital will play host to the ultimate United Nations conference and the single most important climate change event in decades.

The summit was kick-started by leaders from more than 150 countries, who met today for the launch of the 21st Conference of the Parties (COP21) to the United Nations Framework Convention on Climate Change (UNFCCC), which will run through Dec. 11 under extreme security.

For the 21st consecutive occasion since 1994, negotiators are meeting at a year’s end gathering looking to find a solution for climate change, this time with the mandate to finally reach a global agreement to reduce emissions and combat the negative impacts of human induced global warming.

“Can there be a more extraordinary mission that the one we have in the days to come?” said Laurent Fabius, the French Foreign Minister, who serves as COP21’s President. “The eyes of the world are upon us and there are great hopes.”

Fabius said during his opening address that this legally binding global agreement was “within our grasp” and called for countries to step up their climate action.

Parties to the UNFCCC must find a way to agree on a deal that limits global emissions, decides upon how to manage negative climate impacts and set the rules for international finance devoted to climate action, the technology needed to make all this happen and the global legal framework where these principles will live.

The task seems straightforward, but the road to reach this global deal is filled with divisive topics and red-line issues entangling the negotiations. On top of that, scientists urge for immediate action to avoid a dangerous rise in global temperature during the current century and beyond.

After four negotiating sessions this year, there are still many countries unwilling to back down on conflicting economic and political interests that are still unresolved in the negotiating text.

Such is the background for COP21, which started its two-week long process with speeches by United States President Barack Obama, Chinese President Xi Jinping and United Nations General Secretary Ban Ki-moon, among others.

As other leaders, Obama drew lines from this summit to the attacks on the French capital by terrorists three weeks ago, calling the talks a “rejection of those who would tear down our world.”

Like him, Peruvian Environment Minister Manuel Pulgar Vidal stated this process, and hopefully its positive outcome, is by itself a global message, a feeling echoed throughout the day by heads of state and delegates alike.

“Through multilateralism we can show the world we can work together against climate change and against terrorism,” said Pulgar.

This gathering of world leaders breaks the climate conference etiquette, by which ministers and high-level political figures arrive by the summit’s end to sort out sensitive topics and foster agreements. Such a high-profile gathering marked the end of the 2009 meeting in Copenhagen, where a global deal was also expected but delegates returned home empty-handed.

The weekend before the summit’s start saw global pressure mounting after some of the world’s biggest ever climate marches took place in 175 countries and moved more than 700,000 demonstrators.

“The kinds of developments ahead of Paris do allow for some optimism, let me just say that,” Tasneem Essop, climate coordinator for the World Wide Fund for Nature (WWF), told IPS. “We really believe that the kind of momentum outside this process and even inside has been a reason to be more positive about it.”

Essop highlighted that the agreement needs to be “in line with what science requires” to be in the trajectory of an increase of temperature that doesn’t go beyond 1.5°C, a demand shared by most of civil society and several negotiating groups, including the Alliance of Small Island States (AOSIS).

However, to achieve this goal the world would need deep emissions reductions, something upon which there is no agreement yet. During 2015, more than 180 countries pledged to cut GHG emissions in their Intended Nationally Determined Contributions (INDCs), but this effort was not enough.

An analysis by Climate Interactive found that these INDCs would result in expected warming of 3.5 degrees Celsius by 2100, while another estimate, by the Climate Action Tracker, predicted that the combination of government climate action plans, if implemented, would bring global warming down to 2.7 degrees Celsius.

Because of this, a key element in this future agreement is some sort of mechanism — which is called the Paris Ambition Mechanism among some circles— that can provide the means to make this pledges better in the future, thus making the world closer to the desired 2°C.

There are key issues still unresolved, like how often the pledges will be reviewed and what should be done with those climate impact to which countries can’t adapt, also called loss and damage in the jargon.

“This agreement must include loss and damage. Our region (Central American) has been suffering for decades the negative impact of climate change and we need both prepare ourselves and work with communities to deal with this effects, which in many occasions can’t be avoided,” said Tania Guillén, Climate Officer from Centro Humboldt of Nicaragua.

Guillén agreed with Essop and most observers and parties that the deal must be legally binding, so countries can be enforced to actually comply with what they agree upon.

However, one of the most critical topics still to be solved is the climate finance: who will deliver the financial support to enable a transition to renewable energy and climate resilience, how often would that be and who would receive it.

“Finance is a subject where the means of implementation must be really clear, so we can work on any field: mitigation, adaptation, or anything else,” said the Nicaraguan Guillén, who heads the Climate Action Network Latin American.