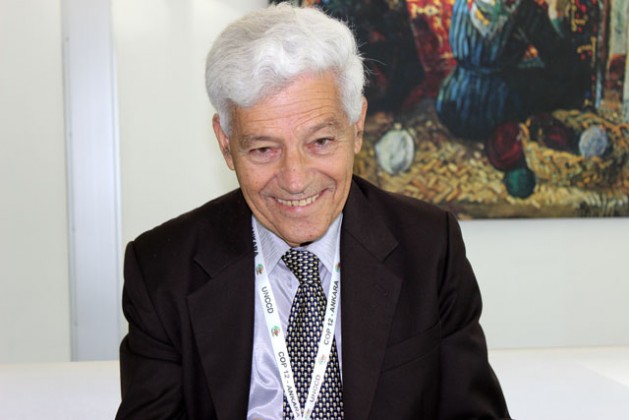 “A direct driver of land degradation is improper land use and this needs to change,” said Uriel N Safriel. Credit: Manipadma Jena/IPS

ANKARA, Turkey, Nov 5 2015 (IPS) - Some 135 million people could be displaced by 2045 as a result of land desertification, according to a recent UK ministry of defence report. This figure could rise to 200 million who are displaced by other climate change impacts like natural disasters by 2050, said British environment refugee specialist Norman Myers.

These could have been little more than debatable numbers until Syria’s civil war refugees rose exponentially to over 4 million, according to the UN High Commissioner for Refugees, in a span of a little over 24 months, with more than 7.6 million internally displaced, together accounting for half of Syria’s population. As much distress and unrest that these figures have caused, they pale in comparison to the number of displaced that will likely occur due to desertification and climate change.

“Syria’s most parts are drylands. Logically, and from experience there is likelihood not yet based on science that droughts which occurred in Syria and Iraq (2006 -2010) severely reduced the land productivity,” Safriel said.

“Large sections of Syrians depend on land for their livelihood and this agrarian crisis maybe contributed to or even incited the conflict,” he added.

A relatively new country, Syria’s borders were drawn by the British and French after the First World War, putting different ethnic groups in the same country, which triggered the political layer of the unrest.

“Indirectly supporting that droughts triggered Syria’s conflict are studies from some other countries, not yet in global focus, one of them the island of Sicily and two others from Africa that find regions categorized as arid here have turned hyper-arid due to climate change as has been predicted by the Intergovernmental Panel on Climate Change (IPCC) reports,” Safriel said, adding, “Science can rightly claim land degradation is an important driver of migration because countries that generate the most migrants today are countries where predicted desertification and land degradation have materialized.”

Simulations show that future agricultural gross domestic product (AGDP) losses in developing countries in Latin America and India would be as high as 8 – 14 per cent and 4 percent respectively. In Africa, Burkina Faso would see 20 per cent loss and Mali up to 30 per cent.

The two billion people living in the driest regions that constitute 41 per cent of Earth’s terrestrial surface are already touched by climate change impacts in varying degrees, according to UNCCD.

Seasonal or temporary migration has intensified. Poor harvests are forcing four out of ten households worldwide to move, crop destruction forces 17 per cent to move while 13 per cent leave owing to strong climatic events including extreme droughts.

In the last 60 years, 40 per cent of intrastate conflicts were associated with land and natural resources such as water, say UNCCD reports.

In 2008, food insecurity triggered 60 riots in over 30 countries, 10 of which resulted in multiple deaths.

Like Syria, beneath the surface of conflict and political instability in Afghanistan, Iraq, Pakistan, Nigeria, Gambia, Senegal, Somalia, Eritrea and Sudan are fragile drylands experiencing sharply declining fertility that have given rise to hunger, unemployment, lack of opportunity and finally to political breakdown.

Seventy percent of countries in the world already declare climate change impacts like desertification and drought as security issues today.

According to the UK ministry of defence report, given such a set of socio-economic situations, areas with larger youth population are more susceptible to instability and conflict and chances of falling prey to radical extremists.

“While migration has always been a natural adaptation mechanism, the difficulty faced today is that the drivers and fallouts of migration are getting complexly interlinked with climate and other socio-political factors,” said Safriel, adding, “The linkages between faulty land use, consequent land degradation and loss of livelihood as a potential migration driver are not clearly, or at all, presented by social scientists or at least not yet found in public domain.”

“Even while we need more information about these linkages to know what drivers contribute most to migration, we know for sure that land degradation is the driver that can drive other drivers,” he said.

“In turn land degradation itself has many drivers, one of them being climate change. A direct driver of land degradation is improper land use. Here the important question is why does a farmer degrade his own land? The answer is a set of other indirect drivers – political, policy, and demographics,” Safriel added.

According to Safriel, what is also important is a farmer’s dependency on a stable market (for his products), which in turn depends on social, political and economic stability. Social and political scientists fail to explain why there are so few policies to really support the land users, he added.

UN Food and Agriculture Organisation (FAO) estimations say in the last 40 years nearly one-third of the world’s arable land has been lost to erosion. A 2015 report finds 12 million hectares of land continues to be lost every year where 20 million tonnes of grain could have grown instead.

To feed an estimated world population of 9.7 billion by 2050, agricultural production must increase 70 percent and by 100 percent in developing countries over 2005 – 2050.

Experts caution unless we change the way we manage our land, in the next 30 years a billion vulnerable people will have little choice but to fight or flee.