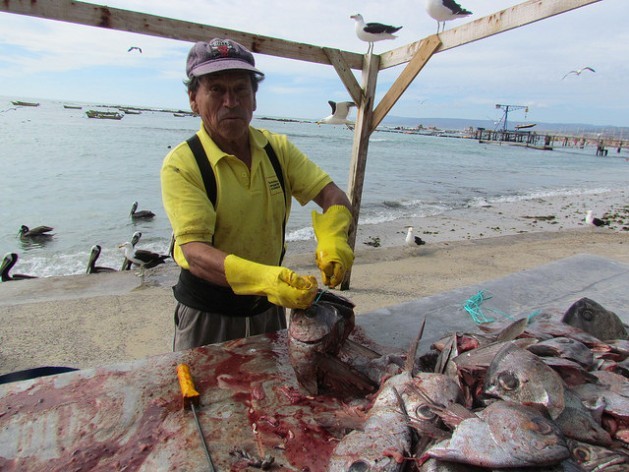 Pedro Pascual, who has been a fisherman for 50 of his 70 years of life, prepares bait in the installations used by some 70 small-scale fisherpersons in a bay in the beach resort town of Algarrobo, Chile. This son, grandson and great-grandson of fishermen is worried because very few young people are fishing today. Credit: Marianela Jarroud/IPS

ALGARROBO, Chile, Feb 3 2016 (IPS) - “Fishing isn’t just for making a living, it’s also enjoyable,” said Pedro Pascual, a 70-year-old fisherman who has been taking his small boat out to sea off Chile’s Pacific coast in the early hours of the morning almost every day for the past 50 years, to support his family.

Impish and ebullient, he told IPS that he doesn’t like to eat much fish anymore, although he is aware of its excellent nutritional properties, which make it a key product in terms of boosting global food security. “The thing is, eating what you fish yourself is kind of boring,” he said.

“Sometimes my wife has to go out and buy fish, because I come home without a single fish – I sell all of them, so I don’t have to eat them,” he confessed, in a mischievous tone.

Pascual was born and raised in the beach resort town of Algarrobo, 100 km west of Santiago.

“Artisanal fishers who used to have a quota, a share of extractive fishing activity, were left without rights, and many lost their work.” -- Juan Carlos Quezada

The son, grandson and great-grandson of fishermen, he stressed that fishing is everything for him and his family, as he prepared bait on counters built on the beach, which are used by some 70 local fishers.

He and the others will sell their catch in the same place the following day, at market installations built there by the municipal government.

“We used to catch a lot of meagre (Argyrosomus regius) in this area. Now we catch hake (Merluccius) in the winter and in the summer we catch crab and some red cusk-eel (Genypterus chilensis),” he said.

As he prepared the bait, tying fish heads with twine, Pascual explained that he and his fellow fishermen go out in the afternoon, lay their lines, return to land, and head out again at 6:00 AM to pull in the catch.

“I like crabs, because there are different ways to eat them. I love ‘chupe de jaiba’ (crab quiche). You can make it with different ingredients,” he said.

He repeated several times in the conversation with IPS how much he loved his work, and said he was very worried that there are fewer and fewer people working as small-scale fishers.

“At least around here, we’re all old men…young people aren’t interested in fishing anymore,” he said. “They should keep studying, this work is very difficult,” he said, adding that he is lucky if he makes 300 dollars a month.

In response to the question “what will happen when there are no more small-scale fishers?” he said sadly: “people will have to buy from the industrial-scale fisheries.”

This is not a minor question, especially since large-scale fishing has hurt artisanal fisheries in countries along the Pacific coast of South America, which have become leaders in the global seafood industry over the last decade.

Small-scale fisheries account for over 90 percent of the world’s capture fishers and fish workers, around half of whom are women, according to the United Nations Food and Agriculture Organisation (FAO) regional office for Latin America and the Caribbean, based in Santiago. 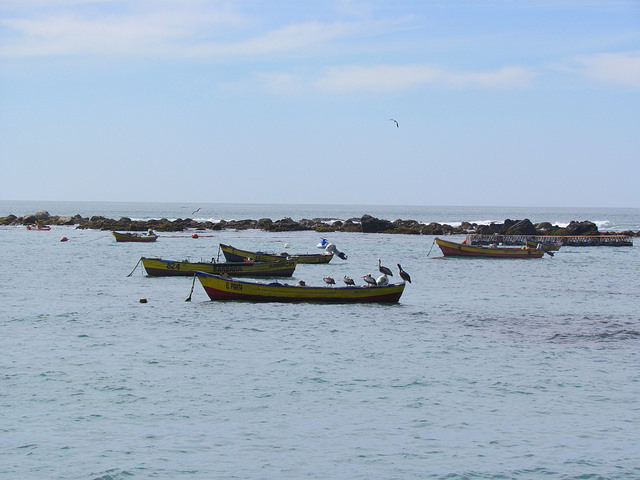 Boats anchored in a small bay in the Chilean town of Algarrobo, waiting for the local fishermen to head out to sea in the evening to put out their lines. They go out the next day at dawn to haul in their catch, in a centuries-old activity that is now threatened by overfishing and laws in favour of industrial-scale fishing. Credit: Marianela Jarroud/IPS

In addition, they supply around 50 percent of all global fish catches, and fishing and aquaculture provide a livelihood for between 10 and 12 percent of the world’s population.

Studies show that fish is highly nutritious, offering high-quality protein and a broad range of vitamins and minerals, such as vitamins A and D, phosphorus, magnesium and selenium, while saltwater fish have a high content of iodine.

Its protein, like that of meat, is easily digestible and complements protein provided by cereals and legumes that are the foundation of the diet in many countries of the developing South.

Experts say that even in small quantities, fish improves the quality of dietary protein by complementing the essential amino acids that are often present in low quantities in vegetable-based diets.

Moreover, fish oils are the richest source of a kind of fat that is vital to normal brain development in unborn babies and infants.

Chile, a long, narrow country between the Pacific Ocean to the west and the Andes mountains to the east, has 6,435 km of coast line and a broad diversity of marine resources.

The three main fish captured in Chile are the Chilean jack mackerel (Trachurus murphyi), sardines and the anchoveta, which bring in more than 1.2 billion dollars a year in revenues on average, but are facing an overfishing crisis.

Extractive fishing provides work for more than 150,000 people in this country of 17.6 million and represents 0.4 percent of GDP. Of the industry’s workers, just over 94,000 are small-scale fishers and some 22,700 are women, according to the National Fisheries and Aquaculture Service.

About three million tons of fish are caught every year in this South American country. But fish consumption is just 6.9 kilos per person per year – less than eight percent of the 84.7 kilos of meat consumed annually per capita.

The low level of fish consumption in Chile is attributed to two main reasons: availability and prices.

With regard to the former, a large proportion of the industrial-scale fish catch is exported.

A controversial law on fisheries and aquaculture in effect since 2013, promoted by the right-wing government of former president Sebastián Piñera (2010-2014), has played a major role in this scenario.

The law grants fishing concessions for 20 years, renewable for another 20, and establishes that large companies can receive fishing rights in perpetuity, which can be passed from one generation to the next.

“Artisanal fishers who used to have a quota, a share of extractive fishing activity, were left without rights, and many lost their work,” Juan Carlos Quezada, spokesman for the National Council for the Defence of Artisanal Fishing (CONDEPP), told IPS.

The representative of the union of small farmers added that “ninety percent of artisanal fishers have been left without fish catch quotas, because concessions and quotas were only assigned to industrial fisheries and shipowners.”

While small-scale fishers are fighting for the law to be repealed, the government continues to support the Development Fund for Artisanal Fishing which, contradictorily, is aimed at the sustainable development of Chile’s small-scale fishing industry, and backs the efforts of organisations of small fishers.

Pascual sees things clearly: “Fishing is my life and it will always be. The sea will always give us something, even if it offers us less and less.”