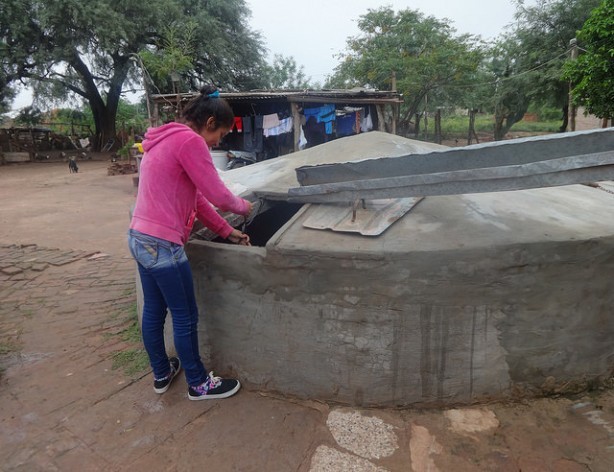 Jésica Garay, a young mother who is studying to become a teacher, gets water from the family tank built next to her humble home in the rural municipality of Corzuela in the northeast Argentine province of Chaco. Credit: Fabiana Frayssinet/IPS

CORZUELA, Argentina, Apr 25 2016 (IPS) - In a semiarid region in the northeast Argentine province of Chaco, small farmers have adopted a simple technique to ensure a steady water supply during times of drought: they harvest the rain and store it in tanks, as part of a climate change adaptation project.

It’s raining in Corzuela, a rural municipality of 10,000 inhabitants located 260 km from Resistencia, the provincial capital, and the muddy local roads are sometimes impassable.

But it isn’t always like this in this Argentine region where, as local farmer Juan Ramón Espinoza puts it, “when it doesn’t rain there is no rain at all, and when it does rain, it rains too much.”

“There have always been water shortages, but things are getting worse every year,” he told IPS. “There are seasons when four or five months go by without a single drop of water falling.”

“I used to bring water from the public well. My husband would go with a pony carrying a water container and bring water for the tank we have back there. But other times we would have to go and buy water, and sometimes I even had to forget about buying meat so I could pay for the water.” -- Olga Ramírez

The local residents of Corzuela blame the increasingly severe droughts on deforestation, a consequence of the spread of monoculture crops in this area since the turn of the century.

“They started to invade us with soy plantations,” Espinoza said. “There’s a lot of deforestation. They come and use their bulldozers to knock everything down, on 4,000 or 5,000 hectares. They don’t leave a single tree standing.”

This is compounded by the global effects of climate change, which has led to longer, more intense droughts.

The result is that local peasant farmers don’t have water for drinking, washing, cooking or irrigating their vegetable gardens.

“We would lose half a day going back and forth, filling tanks and containers with water for washing, cooking and bathing,” recalled Graciela Rodríguez, a mother of 11 children who often helped her hauling water.

“Now if you’re in your house and you need water, you go and get some, in your own house,” she told IPS happily, explaining that she uses the extra time she now has to cook bread, clean the house and take care of her grandchildren.

The solution was to build tanks to collect and store rainwater. But the local peasant farmers had neither the funds nor the technology to implement the system.

Today, joined together in associations, the local residents receive funds and other assistance from the United Nations Development Programme (UNDP), through the Global Environment Facility’s (GEF) Small Grants Programme (SGP).

“This project helps solve a very pressing local problem: water scarcity in the region,” said SGP technician María Eugenia Combi. “The solution is to take advantage of whatever rainfall there is to harvest and store water, for times when it is scarce.” 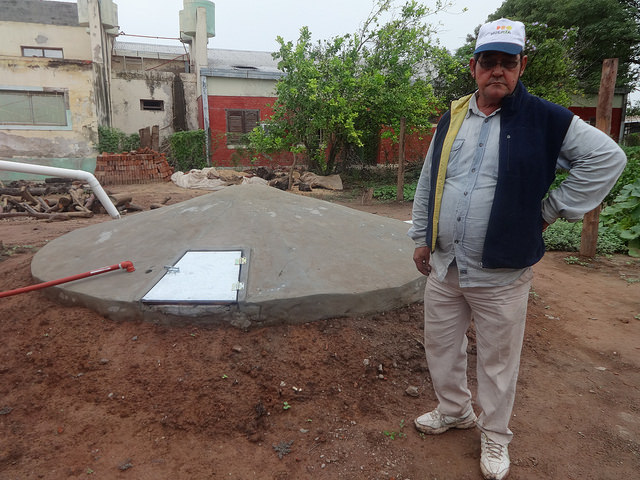 Local small farmer José Ramón Espinoza stands next to a recently constructed community tank for harvesting rainwater, which will enable a group of families to weather the recurrent drought in Corzuela, a rural municipality in the northeast Argentine province of Chaco. The underground tank was provided by GEF’s Small Grants Programme. Credit: Fabiana Frayssinet/IPS

The first project was carried out in this area from 2013 to 2015, when five community water tanks were built, serving 38 families. A second project began in March this year, to build another eight community tanks and 30 single-household tanks.

The technology is simple and low-cost. The roofs of the “ranchos” or poor rural dwellings are adapted with the installation of rain gutters to catch the water, which flows into 16,000-litre family tanks or 52,000-litre community tanks.

“Once the beneficiaries are trained to build the tanks, they can go out and build them in every house,” Combi told IPS.

Traditionally the main source of water for human and agricultural consumption – small-scale livestock production and small gardens – in this region has been family wells.

But as Gabriela Faggi, an INTA technical adviser to the programme, explained to IPS, besides the drought that has reduced ground-water levels, many wells have high sodium levels and are contaminated with arsenic, and in extreme cases the water cannot even be used for watering livestock or gardens, which has exacerbated the region’s food supply problems.

The new year-round availability of water has now helped alleviate that problem as well.

“I used to bring water from the public well,” said another Corzuela resident, Olga Ramírez. “My husband would go with a pony carrying a water container and bring water for the tank we have back there. But other times we would have to go and buy water, and sometimes I even had to forget about buying meat so I could pay for the water.”

“It’s a big help for the animals,” said Ramírez. “We use the stored rainwater for washing, cooking, drinking yerba mate (a traditional herbal infusion consumed in the Rio de la Plata region), watering our chickens and other animals and the garden – for everything.”

“Now that we have this tank we can even waste water,” said Jésica Garay, a young mother who is studying to be a teacher. “We even use it to water the garden. Before, we only had enough for drinking and bathing.

“We don’t have to worry anymore about not being able to eat something, in order to buy water,” she said.

The SGP, active in 120 countries, emerged in 1992 as a way to demonstrate that small-scale community initiatives can have a positive impact on global environmental problems. The maximum grant amount per project is 50,000 dollars.

“What we are aiming at are local actions with a global impact,” the head of the programme in Argentina, Francisco Lopez Sastre, told IPS. “That is, small solutions to global environmental problems like climate change.”

He said the promotion of vegetable gardens, which complement the water tank programme “will boost consumption of fruit and vegetables, which is very low among local families due to the high cost.

“This can improve the household economy and bolster the inclusion of healthy foods, which will result in better health and food sovereignty.”

The SGP is currently carrying out another 13 projects in Chaco, for which it has provided a combined total of 537,000 dollars in grants.

Two of them involve water supply for human consumption in rural communities, complemented by agroecological gardens.

The province, which has a population of one million people, has the highest poverty level in this country of 43 million, according to independent studies. In Chaco, more than 57 percent of the population lives in poverty, and 17 percent in extreme poverty.

It is also the region with the second-largest proportion of indigenous people. Population density is 10.6 inhabitants per square km, below the national average of 14.4.