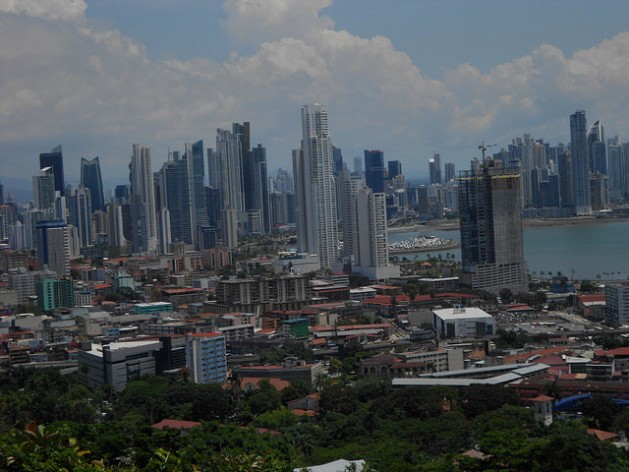 Panama City, one of the fastest growing metropolises in Latin America. The Third United Nations Conference on Housing and Sustainable Urban Development (Habitat III) will be held in Quito in October and will adopt the New Urban Agenda. Credit: Emilo Godoy/IPS

MEXICO CITY, Jun 30 2016 (IPS) - The declaration that will be presented for approval at the Third United Nations Conference on Housing and Sustainable Urban Development (Habitat III) in October has again sparked conflict between the opposing positions taken by the industrial North and the developing South.

The aim of the conference, to be held in Quito, Ecuador from October 17-20,  is to reinvigorate the global commitment to sustainable urban development with a “New Urban Agenda,” the outcome strategy of Habitat III.

Developing countries want the declaration to include the right to the city, financing for  the New Urban Agenda that will be agreed at the meeting, and restructuring of the United Nations Human Settlements Programme (UN-Habitat) to implement the agreed commitments.

“Long term goals must be put in place that will generate management indicators that can be measured by governments and civil society. Experience related to the social production of habitat should be taken into account, (like that of) people living in informal settlements who have built cities with their capabilities and skills.” - Juan Duhalde

Another bloc, headed by the United States, Japan and the countries of the European Union, is striving to minimise these issues.

In the view of representatives of civil society organisations, these issues should be incorporated into the “Quito Declaration on Sustainable Cities and Human Settlements for All,” the draft of which is currently being debated by member states in a several rounds of preparatory meetings.

Juan Duhalde, head of the Social Research Centre at Un Techo para mi País (A Roof for my Country), a Santiago-based international non governmental organisation, told IPS that these are “key” issues and must be included as part of the discussion and be reflected in a concrete action plan.

“They are the general guidelines that will inform national public policies. The only way forward is for these commitments to be translated into long term agreements for the future. Right now discussions are mainly political and may fall short when it comes to bringing about the progress that is required,” said Duhalde.

The Chilean researcher stressed that “the right to the city goes hand in hand with achieving a paradigm shift away from the present situation, which is biased in favour of profitability for an elite rather than collective welfare for all.”

Stark North-South differences were plainly to be seen at the first round of informal intergovernmental talks held May 16-20 in New York. They will continue to fuel the debate at further informal sessions, the first of which will last three days and is due to end on Friday, July 1.

In the run-up to Habitat III, to be hosted by Quito in October, Ecuador and France are co-chairing the preliminary negotiations. The Philippines and Mexico are acting as co- facilitators.

The right to the city, a term coined by French philosopher Henri Lefebvre (1901-1991) in his 1968 book of the same title, refers to a number of simultaneously exercised rights of urban dwellers, such as the rights to food and housing, migration, health and education, a healthy environment, public spaces, political participation and non discrimination. 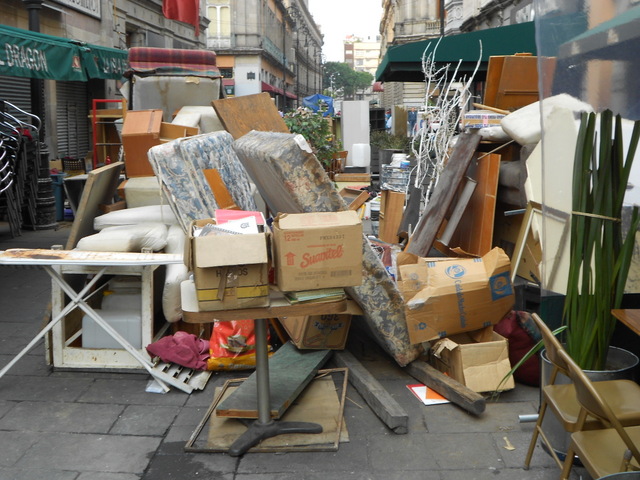 Household possessions dumped on the pavement: a family was evicted from the historic centre of Mexico City. The United Nations Conference on Housing and Sustainable Urban Development (Habitat III) will address the right to the city and the problems faced by people living in informal settlements. Credit: Courtesy of Emilio Godoy

Lorena Zárate, head of the non governmental Habitat International Coalition (HIC) which has regional headquarters in Mexico City, advocates the inclusion of social production of habitat in the declaration. However, it is not explicitly mentioned in the draft declaration.

“We want it to be included, as otherwise it would mean turning a blind eye to half or one-third of what has been constructed in the world. But there is little room to negotiate new additions, because they are afraid of acknowledgeing them, and consensuses have to be built,” said the Argentine-born Zárate, who is participating in the New York meetings.

The concept recognises all those processes that lead to the creation of habitable spaces, urban components and housing, carried out as the initiatives of self-builders and other not-for-profit social agents.

The most recent version of the draft declaration, dated June 18, bases its vision “on the concept of “cities for all” recognises that in some some countries this is “understood as the Right to the City, seeking to ensure that all inhabitants, of present and future generations, are able to inhabit, use, and produce just, inclusive, accessible and sustainable cities, which exist as a common good essential to quality of life.”

States party to the declaration emphasise “the need to carry out the follow-up and review of the New Urban Agenda in order to ensure its effective and timely implementation and progressive impact, as well as its inclusiveness, legitimacy and accountability.”

Moreover they stress the importance of strengthening the Agenda and its monitoring process, and invite the U.N. General Assembly to “guarantee stable, adequate and reliable financial resources, and enhance the capability of developing nations” for designing, planning and implementing and sustainably managing urban and other settlements.

They also request that UN-Habitat prepare a periodic progress report on the implementation of the New Urban Agenda, to provide quantitative and qualitative analysis of the progress achieved.

The process of report preparation should incorporate the views of national, sub-national and local governments, as well as the United Nations System, including regional commissions, stakeholders from multilateral organizations, civil society, the private sector, communities, and other groups and non-state actors, the draft declaration says. 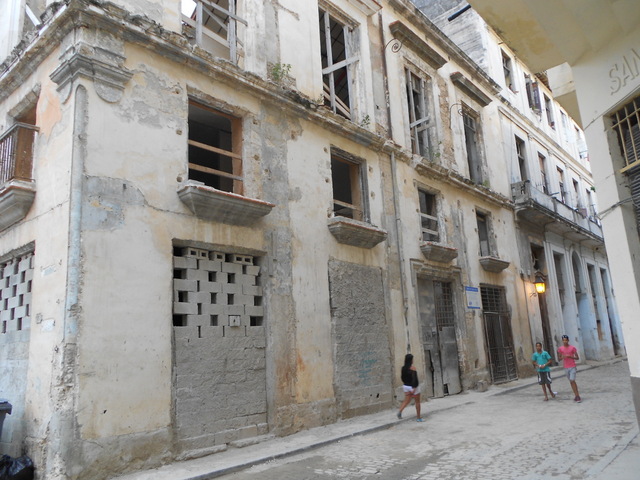 A building being renovated in Havana, Cuba. Developing countries want the Third United Nations Conference on Housing and Sustainable Urban Development to provide the necessary funding to promote the New Urban Agenda, to be adopted by UN-Habitat. Credit: Courtesy of Emilio Godoy

The outline of the draft declaration report has section headings on sustainable and inclusive urban prosperity and opportunities for all; sustainable urban development for social inclusion and the eradication of poverty; environmentally sound and resilient urban development; planning and managing urban spatial development; means of implementation and review.

“It’s (like) a soap opera saga. Right now we are trying to contribute ideas to strengthen the proposal for the right to the city. In the draft, this issue is diluted out; we do not want it to be further diluted,” a Latin American official participating in the negotiations told IPS.

“The United States and China do not want the text to contain references to human rights,” the official added, speaking on condition of anonymity.

It is expected that the draft declaration will be finalised at the meeting of the Habitat III preparatory committee (PrepCom3) to be held July 25-27 in Indonesia, and be presented for approval by U.N. member states at the full Habitat III conference in Quito.

To avoid a repetition of the sequels to the 1976 Vancouver Habitat I conference and the 1996 Habitat II conference in Istanbul, which were not evaluated afterwards, Duhalde and Zárate both wish to see a comprehensive review and follow-up programme established.

“Long term goals must be included and management indicators must be created that can be measured by governments and social actors. The experience in social production of habitat acquired by people living in informal settlements who have built cities with their capabilities and skills must be taken into account,” said Duhalde.

“We are keen to see the generation of evidence and promotion of research into real problems on the ground, in order to generate practical solutions,” he said.

In Zárate’s view, progress cannot be made in debating a new agenda without having evaluated fulfillment of the previous programme goals.

“There must be a means of discerning what is new and what is still ongoing, what has been successfully done and what has not been achieved, why some things were done and why some were not, and what actors have been involved. There have never been clear mechanisms for review monitoring nor for prioritisation,” she said.

“We are adamant that this should not happen again. But they are not going to include goals or indicators, and there is not much clarity about review and monitoring mechanisms,” she said.

The Latin American official consulted by IPS downplayed the likely achievements of the summit. “Habitat III will only be a reference point. There will be no major changes overnight after October 21. National governments will do whatever they intend to do, with their own resources, their own political and social forces, and their own governance,” he predicted.