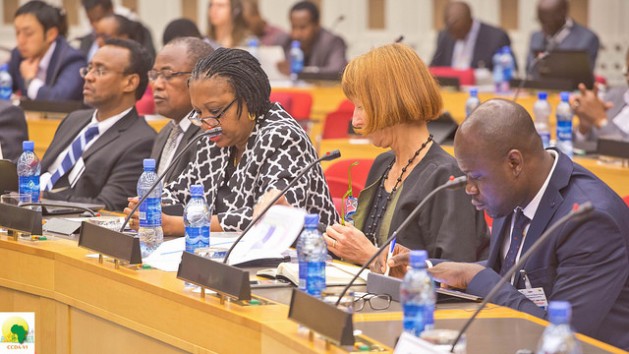 ADDIS ABABA, Oct 30 2016 (IPS) - The Paris Agreement on climate change is set to enter into force on Nov. 4, after it passed the required threshold of at least 55 Parties, accounting for an estimated 55 per cent of the total global greenhouse gas emissions, ratifying the agreement.

The landmark deal, reached at the 21st Conference of the Parties to the United Nations Framework Convention (COP21) in Paris in December 2015, aims to limit the increase in the global average temperature to ‘well below 2°C above pre-industrial levels’ and to pursue efforts to ‘limit the temperature increase to 1.5°C above pre-industrial levels’ in this century.

"Parties cannot have bargaining power from outside." -- Natasha Banda of the ACPC’s Young African Lawyers Programme

The basis of the Agreement is the Intended Nationally Determined Contributions (INDCs) submitted by all parties in the lead-up to COP 21, which are essentially blueprints for how they plan to cut greenhouse gas emissions. Once a party ratifies the Paris Agreement, its coming into force implies that the Agreement and all its provisions – including INDC which changes to NDC – becomes legally binding to that Party.

However, while some African countries are among the 86 Parties that had ratified the Agreement by Oct. 27, an analysis by the African Climate Policy Centre (ACPC) of the United Nations Economic Commission for Africa (UNECA) has revealed that most African NDCs are vague in their adaptation and mitigation aspirations.

“There are still a number of challenges with the submissions of many developing countries, including vagueness in their mitigation ambitions and adaptation aspirations; lack of cost estimates, no indication of sources of funding and in some cases, pledges of mitigation commitments that exceed their current levels of emissions, among others,” Johnson Nkem of ACPC told IPS during the Sixth Conference on Climate Change and Development in Africa (CCDA VI), held from Oct. 18-20.

Nkem sympathises with most African countries, which he said had to outsource the development of their INDCs due to lack of capacity and resources to do so on their own. He says ACPC is ready to help countries that are yet ratify to consider revising their climate action plans and make them more realistic before they submit instruments of ratification. 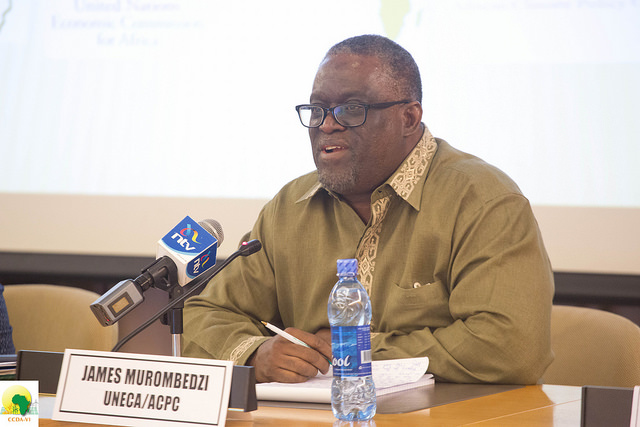 With the continent considered the most vulnerable to climate change vagaries but contributing a mere five percent to global GHG emissions, the CCDA VI was held under the theme: The Paris Agreement on climate change: What next for Africa?

The main objective of the meeting was to discuss implications of implementing the Paris Agreement, considering that the continent is already experiencing climate-induced impacts, such as frequent and prolonged droughts and floods, as well as environmental degradation that make livelihoods difficult for rural and urban communities. Increasing migration is both triggered and amplified by climate change.

In this vein, of utmost importance for Africa is to understand the implications of the Agreement with regards to means of implementation (technology transfer and finance), an issue that has never escaped the minds of the African Group of Negotiators, and this is a point that Murombedzi emphasised to stakeholders at the conference.

“There are contentious nuances of the agreement that must be unpacked in the context of Africa’s development priorities, particularly in regard to the means of implementation which were binding provisions of the Kyoto Protocol and currently only non-binding decisions in the Paris Agreement,” said James Murombedzi, Officer in Charge of the ACPC.

But with the defective NDCs, Murombedzi is of the view that “the unprecedented momentum for ratification of the Paris Agreement presents an urgent opportunity for African countries to revise their Climate Action Plans to address the noted discrepancies and strengthen their ambition levels where appropriate.”

According to Murombedzi, the move would ensure that the implementation of the Agreement supports and accelerates the continent’s sustainable and inclusive development agenda as framed by the African Union’s Agenda 2063 and the UN 2030 Agenda for Sustainable Development.

Apart from revision of NDCs, another key issue that emerged at the conference was the mainstreaming of climate information and services in national decision-making processes, in order to better manage the risks of climate variability and adaptation, especially among the most vulnerable communities.

In catalyzing action for this, UNECA organised a meeting for lawmakers, on the sidelines of CCDA VI.

“This training is geared at setting the scene for lawmakers to factor climate information issues in budgetary allocation in their countries,” said Thierry Amoussougo of Economic Commission for Africa (ECA), pointing out that the meeting was looking at strategies that could be implemented by lawmakers and governments to ensure climate change policies were mainstreamed into development planning and actions in different African countries.

According to experts, climate information refers to data that is obtained from observations of climate (temperature, precipitation from weather centers) and also data from climate model output. It entails the transformation of climate-related data together with other related information into customized products such as projections, forecast, information, trends, economic analyses, counseling on best practices, development and evaluation of solutions and other services in relation to climate that are useful to society.

The challenge is that due to several factors, these services in most African countries are not well coordinated, let alone accurate.

“There is need to not only build the capacities of the required human resources but also invest in adapted climate information infrastructure and create the enabling environment for different institutions involved in climate information delivery,” said Sylvia Chalikosa, Member of Parliament for Mpika Central located in Zambia’s far Northern region of Muchinga.

Generally, in examining the implications of the Paris Agreement for Africa’s sustainable economic growth, the conference noted the need to identify viable and transformative investment opportunities, reform institutions to make them more efficient, and build capacity to access and absorb climate finance — in readiness to take advantage of the opportunities presented by the Paris agreement, to leapfrog technologies and transition to low-carbon, climate-resilient pathways.

This, according to Natasha Banda, who is part of the ACPC’s Young African Lawyers Programme, supporting the African Group of Negotiators is the only way, for there is no turning back for African countries even amidst the noted teething challenges with their NDCs.

To this end, Mithika Mwenda of the Pan African Climate Justice Alliance (PACJA) has some advice for African countries as they go to Marrakech next month, where rules and procedures for implementation of the Paris Agreement would be set.