This article is published ahead of World Food Day, celebrated October 16. 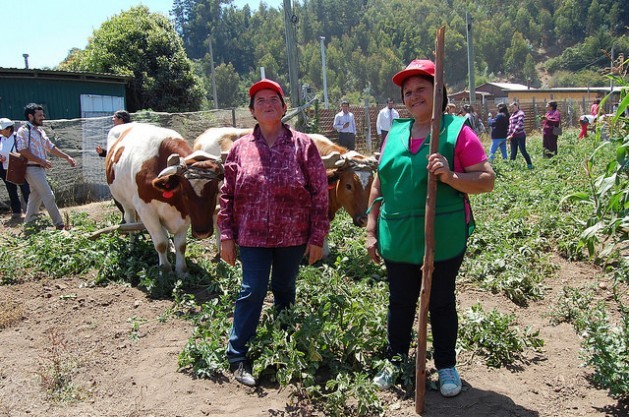 Two farmers in Cobquecura in central Chile show visitors changes made in their subsistence crops to withstand the effects of global warming, with the support of public policies to strengthen food security in times of climate change. Credit: Claudio Riquelme/IPS

SANTIAGO, Oct 12 2016 (IPS) - Climate change is leading to major modifications in agricultural production in Latin America and the Caribbean, and if mitigation and adaptation measures of the productive system are not urgently adopted, threats to food security will be exacerbated.

This could reverse the significant progress made in the region by means of plans to achieve the Zero Hunger goal, the experts told IPS.

For example, to maintain coffee yields, crops had to be moved from 1,000 to between 1,200 and 2,000 metres above sea level, while many Chilean vineyards had to be moved south, to get more sun and rain.

Large companies can afford to buy other land, but many family farmers find their livelihood at risk and wonder if the time has come to change crops or even to leave their land and move to a city, in order to survive.

“If the climate is no longer suitable for production, you have to move to other areas where the agroecological and climate conditions are adequate. For large companies this is not a big problem, but it is for small-scale producers with less technology, lower levels of investment and a more reduced capacity for stockpiling.” -- Adrián Rodríguez

“Climate change puts us in a situation of insecurity. If in the past we were able to more or less estimate average temperatures or humidity for a particular area, now we have lost the capacity to make forecasts based on a certain degree of probability,” Jorge Meza, an Ecuadorian expert in the United Nations Food and Agriculture Organisation (FAO) regional office, told IPS.

“Considering that the effects could be either positive or negative, it has been estimated that by 2030 the impacts from climate change on the regional economy could reach an average of 2.2 per cent of GDP in damage,” he said.

“Some of the effects could be beneficial, like an increase in rainfall that would mean more water for crops,” said Meza, the senior forestry officer in the Santiago office.

But in general terms, he said, if the losses amount to 2.2 per cent of GDP, “there will be countries with zero economic growth, and beyond the economic factor, there will be a strong social impact, of four to five per cent.”

FAO’s aim is to underscore the links between climate change mitigation and adaptation and food security, with the slogan “Climate is changing. Food and agriculture must too”, for this year’s World Food Day, celebrated Sunday Oct. 16.

One example to be considered is the Economic Commission for Latin America and the Caribbean (ECLAC) forecast for Central America.

If the necessary climate change mitigation and adaptation measures are not taken, production of basic grains could be reduced 25 per cent by 2050, the regional U.N. agency estimates.

“This is alarming for two reasons: first because it means a shortage of food, and second because the remaining food – that 75 per cent – will become more expensive. Both phenomena will have an impact on the poor: with less food available, and more costly food, there will be reduced possibilities of access to basic grains.” Meza said. A family farm in the state of Rio de Janeiro,Brazil, with a planting system adapted to the manifestations of climate change in the area. Credit: Fabiola Ortiz/IPS

At her home in the Cajón del Maipo region, in the foothills of the Andes mountains, about 17 km from Santiago, Espinosa plants food that she puts on her table and also distributes among her children and grandchildren.

“Food is increasingly expensive. For example, the cost of a kilo of tomatoes soared to 2,500 pesos (3.7 dollars) in September. If I plant at home, I not only save that expense, but in addition, I get a natural, organic product, free of pesticides,” she told IPS.

“My goal now is for everything that I plant to be organic, and I hope the weather will be favourable. In November 2015 heavy rains destroyed everything we planted,” she said.

Climate change is seen in Latin America in some 70 annual weather events, including hurricanes, drought, fires, landslides, and mainly floods, which affect an average of five million people.

Meanwhile, one third of the 625 million people in Latin America live in high-risk areas, exposed to climate events that pose a threat to their livelihood.

At the same time, climate change has more long-term effects, such as declining productivity in agriculture and a greater need to shift crop production areas.

“They say that if you don’t move and continue planting in the same area, you will probably have lower yields, and that could require more inputs or technologies and more resistant seeds,” Costa Rican economist Adrián Rodríguez, head of the Agricultural Development Unit in the ECLAC regional office, told IPS.

“From the point of view of family farming or the production of crops that play an important role in food security, an increase in food prices could affect farmers and consumers,” he said.

He added that there is another effect that has already been seen: the need for relocalisation of productive activities.

“If the climate is no longer suitable for production, you have to move to other areas where the agroecological and climate conditions are adequate. For large companies this is not a big problem, but it is for small-scale producers with less technology, lower levels of investment and a more reduced capacity for stockpiling,” he said.

In 2015, Latin America became the first region in the world to reach the two global anti-hunger goals: the prevalence of malnutrition fell to 5.5 per cent and the total number of malnourished people dropped to 34.3 million.

However, the challenge now is to reach zero hunger, a goal that could be affected by climate change, which has an impact on the four pillars of food and nutritional security: stability in food production, availability of food, physical access and affordability of food, and adequate use of food.

Meza called for mitigation actions that take into consideration a change in the energy sector towards renewable sources and, in agriculture, a shift towards organic practices, avoiding deforestation, the use of animal waste to generate biogas, and improvements in the diets of livestock with the aim of reducing greenhouse gas emissions, among other measures.

Rodríguez said mitigation should start by providing farmers with timely meteorological information while developing varieties of crops more resistant to drought, moisture and variability in availability of water and sunlight, and optimising the use of water with more efficient irrigation systems.

He also proposed strengthening research based on the knowledge of “family farmers and indigenous people, who have traditional varieties better suited to certain climates or soils…It is important to take this knowledge into account.”