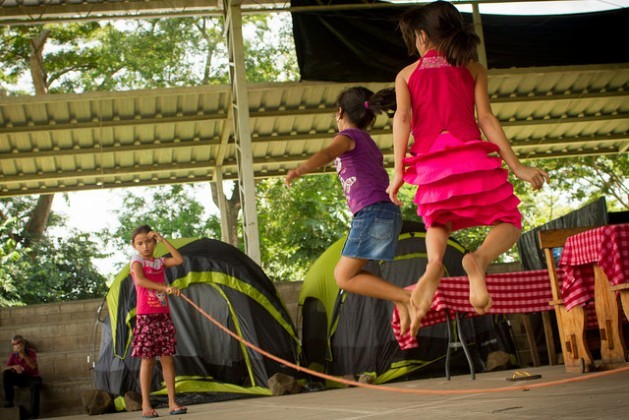 CALUCO, El Salvador, Oct 7 2016 (IPS) - A basketball court in this small town in western El Salvador was turned overnight into a shelter for some two dozen families forced to flee their homes after a recent escalation of gang violence.

But they are still plagued with fear, grief and uncertainty.

“I am devastated, I have lost my father and now we are fleeing with my family, as if we had done something wrong”, said a 41-year-old woman, waiting for lunchtime in the camp set up in Caluco, a rural municipality in the western department of Sonsonate in El Salvador.

She, like the rest of the victims interviewed by IPS, asked that her name not be used, for fear of retaliation.

Her father was killed mid-September by members of the Calle 18 gang, which then threatened to kill the rest of the family. Calle 18 and Mara Salvatrucha, the two main gangs, are responsible for most of the criminal activity in this Central American country of 6.3 million people.

“The phenomenon is not well known because it is shrouded in silence: people are threatened and forced to leave their homes in silence, since it is safer than filing a complaint.” -- Osvaldo López

In 2015, the murder rate was 103 per 100,000 inhabitants in El Salvador, which made it the most violent country in the world, with the exception of countries suffering from armed conflict, like Syria.

The left-wing administration of Mauricio Funes (2009-2014) facilitated a gang truce in 2012, which lead to a dramatic drop in homicides.

But his successor, former guerrilla leader Salvador Sánchez Cerén, also from the Farabundo Martí National Liberation Front (FLN), ruled out an extension of the truce as it was widely rejected by the public, and the homicide rate soared once again.

“Back in El Castaño we left the fields where my father worked growing corn and beans, and I left my chicken breeding,” said the woman in the shelter, next to her husband and two children, and surrounded by children playing amidst makeshift tents and rooms built with plastic and wood.

The shelter was set up by local authorities in Caluco, when dozens of the 60 families in El Castaño, a rural community in this municipality, fled on Sept. 18 because of a recent surge in violence unleashed by Calle 18, which has controlled the area for the last two years.

In the territory under their control, the gangs freely rob, rape and extort, according to the people in the shelter. Anyone who fails to make the required “protection payments” is given three days to get out or be killed, they said.

For now, the gang members have retreated in the face of the police and military incursion that occurred in response to the mass displacement of villagers. On Sept. 4 a group of refugees returned home for a few hours, under police guard, to check their crops and feed their animals.

Most of the families in the community sought shelter with family and friends in other localities in the area, since they left their homes before the shelter had been built.

“I feel out of place but at the same time calm, because there are no armed people around me,” said one 64-year-old victim, who fled to a friend’s house in Izalco, about 10 km from El Castaño.

He has left behind his livelihood, small-scale farming and dairy production, and now he will have to figure out another way to make a living. For the time being, he earns some money ferrying people and cargo back and forth in his worn-down old truck.

“I have to see what I’ll do to put food on the table,” he told IPS, as he drank a soft-drink in the shade of a tree, in his forced new place of residence. He has already sold his six cows, which produced 70 litres of milk per day that he would sell to a nearby dairy.

This is not a new phenomenon in the country and has been reported on occasion by the local press, but the exodus of local people of El Castaño and the shelter assembled in Caluco have exposed the serious problem of forced displacement in El Salvador.

In a report published on Sept. 26, the Civil Society Bureau against Forced Migration and Organised Crime reported 146 cases of displacement between Aug. 2014 and Dec. 2015, in a partial recount since the organization does not cover the whole country.

The victims filed complaints in just 36 per cent of the cases, according to the report. This low rate was due mainly to fear of retaliation and mistrust in state institutions.

Government authorities have played down the phenomenon. Vice President Oscar Ortiz recently stated that it should not be blown out of proportion because “it’s not as if things were similar to Afghanistan.”

“The government has tried to avoid acknowledging the issue of internal displacement,” said Nelson Flores of the Foundation for the Study of the Application of Rights (FESPAD), one of the 13 organisations that make up the Bureau.

As a result, it has also failed to make an assessment of the problem and its impacts, he told IPS.

“The phenomenon is not well known because it is shrouded in silence: people are threatened and forced to leave their homes in silence, since it is safer than filing a complaint,” said Osvaldo López, head of the Dignity and Justice Programme of the Episcopal Anglican Church of El Salvador – one of the religious organisations that tracks gang-related violence.

He said the government does not officially recognise the critical situation of forced displacements driven by criminal violence, because that would entail an admission that it had lost its ability to provide security, and was in need of international protection and support.

“Other countries might open their doors to let in people who want to leave El Salvador, but a declaration of this kind would have strong political and economic repercussions for the country,” he told IPS.

From 2006 to 2014, López headed the Programme of Assistance for Refugees and Asylum Seekers in El Salvador, for the United Nations High Commissioner for Refugees (Acnur).

Reports from international organisations indicate that thousands of people are compelled to leave their homes in silence, without leaving any trace in the official statistics.

The Global Report on Internal Displacement 2016 said that in 2015 there were 289,000 victims of forced displacement in El Salvador. The total for El Salvador, Guatemala, Honduras and Mexico combined – among the most violent areas in the world – amounts to one million.

“Displacement in the region tends to remain unquantified and unaddressed for reasons ranging from political to methodological,” according to the report, issued by the Internal Displacement Monitoring Centre, linked to the United Nations, and the Norwegian Refugee Council.

In most of Central America, there is a lack of recognition that criminal violence causes internal displacement, the report says, adding that Honduras is the only country that has officially recognised the phenomenon.

Meanwhile, the victims at the Caluco camp are waiting to be able to return in a few days to their homes, once the authorities set up a permanent police post in El Castaño.