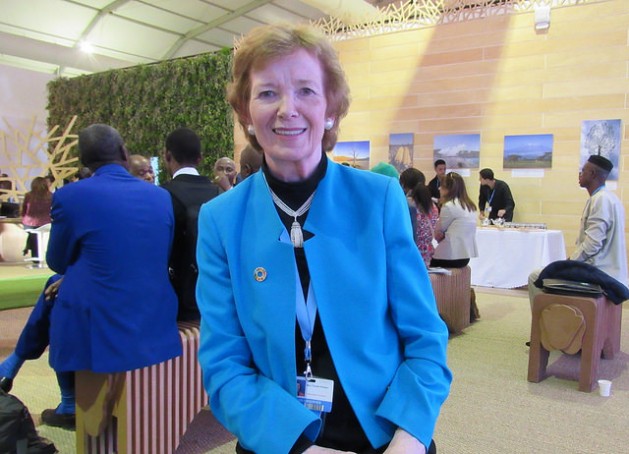 MARRAKECH, Nov 18 2016 (IPS) - The world has been too slow in responding to climate events such as El Niño and La Niña, and those who are the “least responsible are the ones suffering most”, Mary Robinson, the special envoy on El Niño and Climate, told IPS at the United Nations Climate Change Conference in Marrakech (COP22).

"I’ve seen a window into a ‘new normal’ and it is very serious." -- Mary Robinson

During the 22nd Conference of the Parties to the UN Framework Convention on Climate Change (UNFCCC), Robinson strongly advocated for engaging community-led solutions and for incorporating gender equality and women’s participation in the climate talks.

“Global warming is accelerating too much and it is being aggravated by El Niño and La Niña. They do not have to become a humanitarian disaster, but people have now been left to cope for themselves…I think we were too slow in many instances and this has become a humanitarian disaster for the 60 million people who are food insecure and suffering from droughts,” she said.

El Niño has been directly associated with droughts and floods in many parts of the world that have severely impacted millions of livelihoods. A warming of the central to eastern tropical Pacific waters, the phenomenon occurs on average every three to seven years and sea surface temperatures across the Pacific can warm more than 1 degree C.

El Niño is a natural occurrence, but scientists believe it is becoming more intense as a result of global warming.

How El Niño interacts with climate change is not 100 percent clear, but many of the countries that are now experiencing El Niño are also vulnerable to climate variations. According to Robinson, El Niño and its climate-linked emergencies are a threat to human security and, therefore, a threat to the achievement of Sustainable Development Goals (SDGs) announced in September 2015 as the 2030 Agenda replacing the Millennium Development Goals.

“I have gone to Central America to the dry corridor in Honduras and have seen women crying because there is no water and they feel very neglected. They feel they are left behind and that nobody seems to know about them. I saw in Ethiopia severely malnourished children, it could affect them for life in terms of being stunted. The same thing in southern Africa. I feel I’ve seen a window into a ‘new normal’ and it is very serious. We need to understand the urgency of taking the necessary steps,” Robinson said.

Drought and flooding associated with El Niño created enormous problems across East Africa, Southern Africa, Central America and the Pacific. Ethiopia, where Robinson has visited earlier this year, is experiencing its worst drought in half a century. One million children in Eastern and Southern Africa alone are acutely malnourished.

It is very likely that 2016 will be the hottest year on record, with global temperatures even higher than the record-breaking temperatures in 2015, according to an assessment released at the COP22 by the World Meteorological Organization (WMO). Preliminary data shows that 2016’s global temperatures are approximately 1.2 degrees Celsius above pre-industrial levels. Temperatures spiked in the early months of the year because of the powerful El Niño event.

These long-term changes in the climate have exacerbated social, humanitarian and environmental pressures. The UN High Commissioner for Refugees pointed that in 2015, more than 19 million new displacements were associated with weather, water, climate and geophysical hazards in 113 countries, more than twice as many as for conflict and violence.

“We need a much more concerted response and fund preparedness. If we have a very strategic early warning system, we can deal with the problem much more effectively. Building resilience in communities is the absolute key. We need to invest in support for building resilience now rather than having a huge humanitarian disaster,” stressed Robinson.

On Nov. 17, during the COP22 in Marrakech, the Climate Risk and Early Warning Systems (CREWS) – a coalition led by France, Australia, Germany, Luxembourg, the Netherlands, Japan and Canada launched at the Paris climate change negotiations in 2015 – announced a new goal to mobilise more than 30 million dollars by July 2017 and 100 million by 2020.

The international partnership aims to strengthen risk information and early warning systems in vulnerable countries such as Mali, Burkina Faso, the Democratic Republic of the Congo and small island developing states in the Pacific. The idea is to leverage financing to protect populations exposed to extreme climate events.

There will be a special focus on women, who are particularly vulnerable to climate menaces but are the protagonists in building resilience. “Now we’ve moved from the Paris negotiations to implementation on the ground. Building resilience is key and it must be done in a way that is gender sensitive with full account of gender equality and also human rights. We must recognize the role of women as agents for change in their communities,” Robinson emphasised.

The number of climate-related disasters has more than doubled over the past 40 years, said Robert Glasser, the UN Secretary-General’s Special Representative for Disaster Risk Reduction.

“This initiative will help reduce the impact of these events on low and middle-income countries which suffer the most,” he said.

José Graziano da Silva, Director-General of the U.N. Food and Agriculture Organization (FAO), told IPS, “We can see already in Africa the impact of climate change that is undermining our efforts to bring food security for all. Take the example of El Niño that has affected all of Africa in the last two years. Countries that had made fantastic progress like Ethiopia, Zambia, Tanzania and Madagascar are now suffering hunger again. Countries that have eradicated hunger are back to face it again. We need to adapt.”

“Gender is critical. We must recognise it is not about women alone,” she said. “[But] women are important because they provide the largest labour force, mainly in the agricultural sector. It is important to appreciate the differences in the impacts, the needs in terms of response. There is need for balance, affirmative action and ensuring all social groups are taken into consideration.”