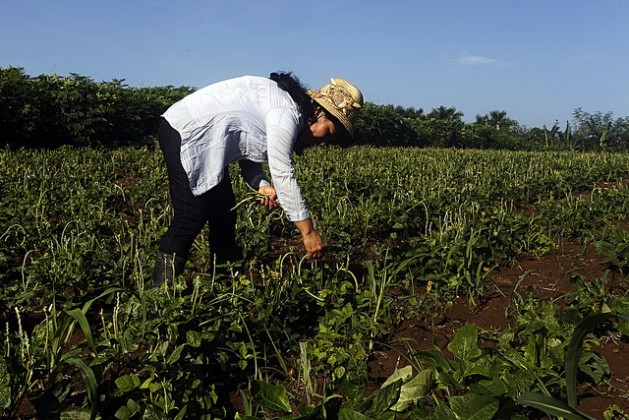 Iraida Semino picks green beans (Phaseolus vulgaris) on her farm La Maravilla, which belongs to the Roberto Negrín González Credit and Services Union in the municipality of La Lisa, on the outskirts of the Cuban capital. Credit: Jorge Luis Baños/IPS

HAVANA, Jan 31 2017 (IPS) - “You have to have good and varied seeds to test which one adapts best to each kind of soil,” says 71-year-old farmer Rubén Torres, who on his farm in central Cuba harvests 1.6 tons of organic beans every year, among other crops.

The importance that Torres places on seeds in order for the agricultural sector to meet local demand for beans, a staple of the Cuban diet, coincides with the assessment by researchers consulted by IPS, who propose promoting genetic improvement and the production of other kinds of legumes.

After two decades of selecting seeds, Torres produces and sells four varieties of black beans, four kinds of red beans and one kind of white bean. “And I have eight varieties for family consumption and for scientific research,” he told IPS.

Located in a livestock farming area on the outskirts of the city of Santa Clara, 268 km east of Havana, Torres’ plot of land is unusual in the area because he devotes most of his 17 hectares to growing beans and rice, which form the basis of the diet of the 11.2 million people in this Caribbean island nation.

“When farmers go to plant they often don’t have seeds. That’s why I always give some of mine to those who need them. Without quality seeds, you can’t succeed.” -- Ruben Torres

Baños de Marrero, as his family farm is called, also has avocado and coconut trees and crops of maize and tomatoes. Other portions are covered with seedbeds and garden beds badly in need of repair where Torres produces 20 tons of ecological fertiliser from worm castings.

“When farmers go to plant they often don’t have seeds. That’s why I always give some of mine to those who need them. Without quality seeds, you can’t succeed,” said Torres, a participant in the Programme for Local Agrarian Innovation (PIAL), which since 2000 has helped empower farmers in 45 of the country’s 168 municipalities.

“There is a public company that sells seeds,” but in his opinion, “to get really good ones farmers have to guarantee them themselves.”

With the support of the Swiss development cooperation agency and the coordination of the state National Institute of Agricultural Science, PIAL started to teach family farmers in western Cuba how to obtain and select their own seeds. It has expanded and now is promoting participation by women and young people in farming.

“Without quality seeds, you really can’t make progress in terms of productivity,” agronomist Tomás Shagarodsky told IPS about a key aspect in raising yields in bean crops in Cuba, where there is potential for growing many more beans. 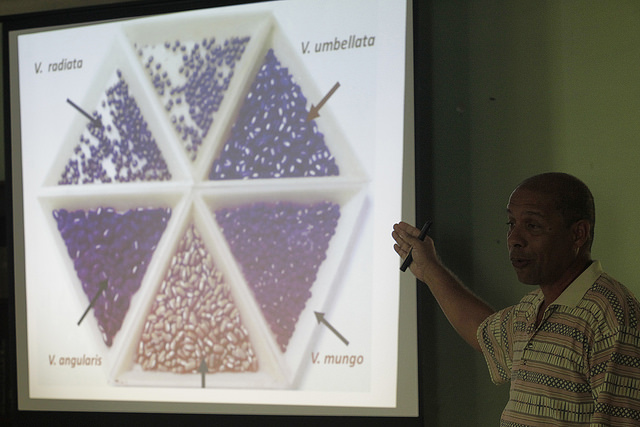 Tomás Shagarodsky, a researcher at the “Alejandro de Humboldt” Tropical Agriculture Research Institute (INIFAT) points out that Cuba can and must produce more varieties of pulses apart from beans and chickpeas. Credit: Jorge Luis Baños/IPS

As part of the government’s agricultural reforms implemented since 2008, incentives were put in place for the production of beans, with the aim of boosting the surface area devoted to this crop in the different kinds of agricultural production units: state-run farms, cooperatives, and small private farms.

Now, the Agriculture Ministry’s Agro-Industrial Grains Group seeks to increase bean production between 15 and 20 per cent a year, in order to meet domestic demand and lower the high cost of beans in the farmers’ markets that operate according to the law of supply and demand.

The countries of Latin America account for more than 45 per cent of global production of beans, according to FAO figures.

The drought in recent years has hurt the yields of beans, which are a staple for the diet and economy of small farmers in the region.

Archeological studies reveal that beans are native to the Americas, with evidence dating back to 5000 to 8000 years. Mexico and Peru dispute the claim of being the birthplace of beans.

To achieve better harvests, he said the sector must solve “structural problems” such as shortages of resources, labour power and equipment, and more complex issues related to climate change and water scarcity.

In that sense, Shagarodsky, an agronomist and researcher at the state “Alejandro de Humboldt” Tropical Agriculture Research Institute (INIFAT), pointed out a vulnerability that is rarely discussed.

“The stock of improved seeds has shrunk because the breeders who used to do this job have retired, have died or have left,“ said Shagarodsky, surrounded by the unpainted walls and deteriorated ceilings of the INIFAT central offices. “That has to change and more attractive salaries have to be paid,“ he said.

In live collections and cold chambers, INIFAT preserves the largest quantity of genetic resources in Cuba. In its germplasm bank it keeps 3,250 of the 18,433 samples safeguarded in the entire national network of institutions that share this mission. Legumes constitute 46 per cent of the resources preserved by INIFAT. 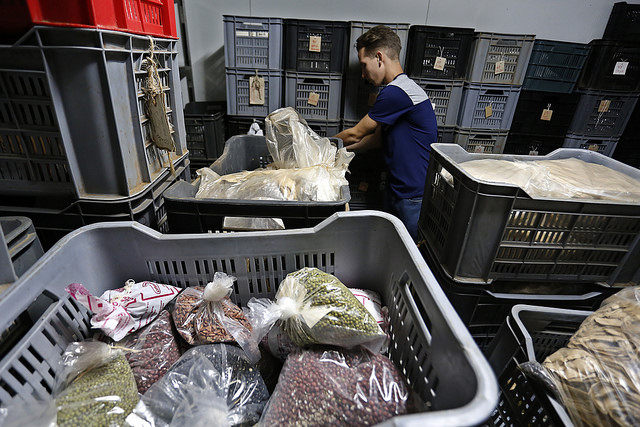 Seeds of different varieties of beans are preserved in the Tropical Agriculture Research Institute’s germplasm bank in Cuba, in addition to other pulses. Credit: Jorge Luis Baños/IPS

In recognition of the important work it carries out, INIFAT was chosen in December to host the activities to end the International Year of Pulses, as 2016 was declared by the United Nations Food and Agriculture Organisation (FAO).

FAO representative in Cuba Theodor Friedrich pointed out at this event that pulses contribute to food security in two senses: they have high protein value and they naturally fertilise soil with nitrogen.

In addition, he said “growing pulses is the only way to add nitrogen to the soil without resorting to fertilisers. And they have important nutritional properties,” such as zero cholesterol and gluten, and high content of iron, zinc and other nutrients.

For these and other reasons, FAO promotes the cultivation of pulses in the western provinces of Pinar del Río and Artemisa, in a project aimed at strengthening local capacities to sustainably produce biofortified basic grains adapted to climate change, including several kinds of pulses, by 2018.

“We eat all kind of pulses, from beans to chickpeas and lentils. They are very important for children because they fall under the category of vegetable proteins,” Misalis Cobo, who lives with her six-year-old son in the Havana neighbourhood of Cerro, told IPS.

“We get beans from the ration card and the rest I buy in markets and stores,” said the 37-year-old self-employed worker. “I can afford these purchases although they are expensive because they stretch a long way for us since it’s just my son and me. But large low-income families they’re expensive,“ she said.

Each person in Cuba receives a small monthly quota of beans at subsidised prices through the ration card. But to feed the family for an entire month, more beans and other pulses are needed, and must be bought at the state and private agricultural markets, and stores that sell imported goods.

Prices range from 0.5 cents of a dollar up to 1.2 dollars for half a kilogram of pulses, in a country where the average income is 23 dollars a month in the public sector, Cuba’s biggest employer by far.