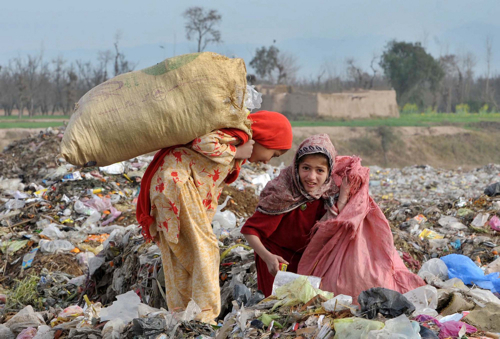 Children look for a living in garbage in Pakistan. Credit: Ashfaq Yusufzai/IPS.

UNITED NATIONS, Mar 6 2017 (IPS) - Unhealthy environments – both inside and outside the home – cause the deaths of more than 1.7 million child under the age of five every year, according to two new reports released by the World Health Organization (WHO) Monday.

Even in their own homes, many children in developing countries have neither clean air to breathe nor clean water to drink, the reports found.

“Almost half of the world’s population is still cooking or heating or lighting their households with very dirty fuels” such as coal or animal dung, Maria Neira, Director of the WHO Department of Public Health, Environmental and Social Determinants of Health told IPS.

Neira describes the smoke that children breathe in from these fuels as a “hidden and very pernicious” cause of ill health, leading to childhood illnesses such as pneumonia and asthma as well as longterm health affects such as poor brain development and lower IQs.

In addition to smoke for dirty cookstoves, children are exposed to many other pollutants both inside and outside the home, including untreated drinking water, outdoor air pollution and pesticide residues, the reports found.

“Almost half of the world’s population is still cooking or heating or lighting their households with very dirty fuels” -- Maria Neira, WHO.

For some children, exposure to toxins comes because they work in unsafe jobs such as tobacco farming or recycling.

Neira gives the example of children who help their mothers to “recycle little pieces from electronic waste computers or old televisions from industrialised countries that end up in Africa.” By helping to recover the heavy metals inside the electronic waste, children are exposed to chemicals that contribute to issues, including brain development problems, says Neira.

One way to address the environmental pollutants that children are exposed to is through ensuring that households have access to clean fuels, Neira told IPS. For those families that cannot yet access clean energy, Neira says that proper ventilation can help by “diffus(ing) the pollution caused by this incomplete combustion.” Access to improved cook stoves that can reduce cooking times and therefore fuel use, can also help, she added.

Even better, is access to green energy, which can also help to address climate change, says Neira, another environmental issue with both current and future impacts on children’s health. Climate change will particularly impact the health of the world’s poorest people by contributing to malnutrition and spreading mosquito borne diseases such as malaria and dengue, said Neira.

According to the report Don’t pollute my future! The impact of the environment on children’s health “570 000 children under 5 years die from respiratory infections, such as pneumonia, attributable to indoor and outdoor air pollution and second-hand smoke each year” and “361 000 children under 5 years die due to diarrhoea, as a result of poor access to clean water, sanitation and hygiene.”

A second report titled Inheriting a Sustainable World: Atlas on Children’s Health and the Environment found that many of these deaths are preventable through addressing their environmental causes, including through access to safe water and clean cooking fuels.

Margaret Chan, WHO Director-General said that children are particularly vulnerable to pollution because “their developing organs and immune systems, and smaller bodies and airways, make them especially vulnerable to dirty air and water.”