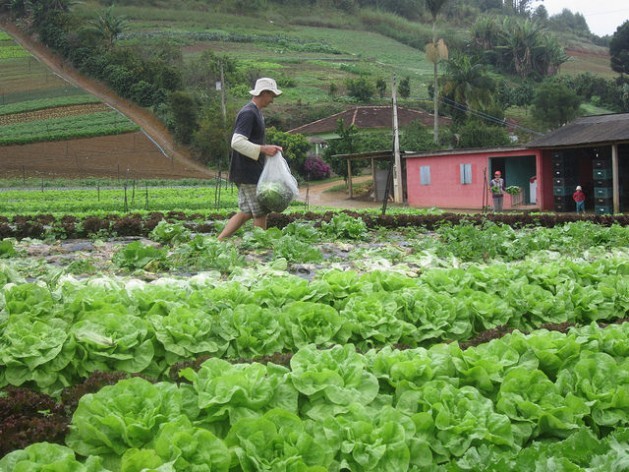 A farmer picks lettuce in Santa María de Jetibá, a hilly farming municipality that is the main supplier of agricultural products for school meals in the city of Vitoria, 90 km away along a winding highway. It is home to the largest Pomeranian community in Brazil and possibly in the world. Credit: Mario Osava/IPS

VITORIA, Brazil, May 29 2017 (IPS) - “I am going back to Panama with many ideas,” said Gilda Montenegro, a nutritionist with the Panamanian Education Ministry, after getting to know the school feeding system in the city of Vitoria, in central-eastern Brazil.

She said she was impressed with how organised it is, the resources available to each school and “the role of played by nutritionists, in direct contact with the lunchrooms, training the cooks in hygiene and nutrition, educating everyone while fulfilling a key educational function.”

Montenegro and 22 other visitors from throughout Latin America and the Caribbean met with Brazilian representatives in the city of Vitoria, for a tour through schools and centres of production and distribution of food that supply the municipal schools.

The May 16-18 technical visit was organised by the Strengthening School Feeding Programmes in Latin America and the Caribbean programme implemented by the United Nations Food and Agriculture Organisation (FAO), as part of a cooperation agreement signed with the Brazilian government in 2008.

“Families adopt our habits, even though we only eat dinner at home. Now we eat more vegetables at home. I used to be fat, but I lost weight doing sports and eating food with less calories, and today I have my health under control.” -- Marcos Rodrigues

The aim was a first-hand look at the implementation in Vitoria of the Brazilian National School Feeding Programme (PNAE), which has become a model replicated in a number of countries around the world. The programme serves 43 million students in public preschools and primary schools, which are municipal, and secondary schools, which are the responsibility of the states.

The PNAE was first launched in 1955. But the significant impact it has had in terms of food security, nutrition and social participation has been seen since a 2009 law established that at least 30 percent of the funds received by each school had to be devoted to buying food produced by local family farms.

“This decentralisation favours local producers and students gain in better-quality, fresh food at a lower cost. It promotes cooperatives and stimulates the local economy, through small-scale farming, while benefiting the environment by reducing transportation time,” said Najla Veloso, the regional project coordinator for FAO.

“In most of the municipalities, the suppliers are parents of the students,” which help forge closer ties between local families and the schools and improves the quality of the food. All of this constitutes an important help for keeping people in rural areas,” Veloso told IPS. 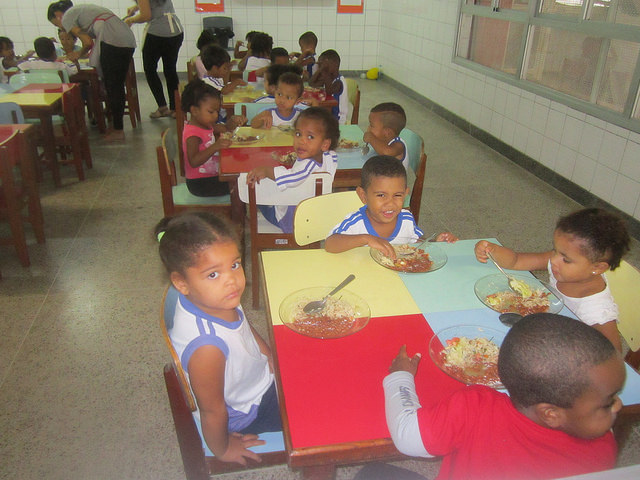 Students eat lunch in the Alberto Martinelli Municipal Preschool in the city of Vitoria. A good part of their food comes from local family farms, like in the rest of the public schools in Brazil. Credit: Mario Osava/IPS

Buying local could rekindle the ancestral agricultural knowledge of the Ngäbe and Buglé people, who live in western Panama, said Montenegro. Since 1997, the two ethnic groups have shared an indigenous county with a population of about 155,000.

“They provide 80 per cent of the food for four schools, but they have not been able to expand, because of the system of purchases by tendering process, and are almost limited to producing for their own consumption,” lamented the Panamanian nutritionist. More school purchases could “rescue their traditional methods of harvesting and preserving their typical products,” she said.

Vitoria, the capital of the Brazilian state of Espírito Santo, was chosen to receive technicians and authorities from 13 countries because of “its strong implementation of the PNAE, its organised team, and because it has been a pioneer in this area,” explained Veloso.

Before the new law went into effect in 2008, Vitoria already prioritised healthy food produced by small-scale local farmers, said Marcia Moreira Pinto, coordinator of the School Food and Nutrition Sector in the Municipal Secretariat of Education.

It also always surpassed the minimum proportion of purchases set for family agriculture, she said. In 2016, 34 per cent of the purchases were from small-scale farmers.

This aspect has only recently been recognised as key to food security. 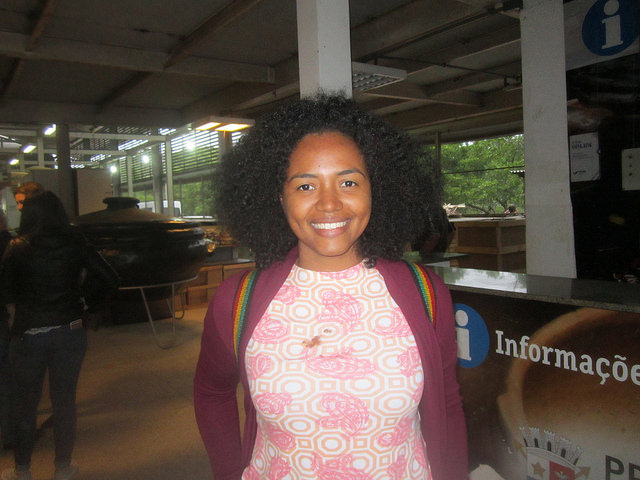 Gilda Montenegro, a nutritionist with Panama’s Education Ministry who took part in a FAO-organised technical visit to get a first-hand look at the school feeding programme in Vitoria, Brazil, together with 22 other representatives of 12 Latin American and Caribbean countries. Credit: Mario Osava/IPS

“This integration between education and family agriculture benefits society as a whole, it’s fantastic. I will try to do it in my town,” said Mario Chang, director of education in the department of San Marcos, Guatemala.

The challenge, she said, “will be to adapt Brazil’s local purchases system” to her country, where all supplies for public institutions go through the state National Production Council.

A campaign against the waste of food is an innovation created by students in the Eunice Pereira da Silveira Municipal Primary School. In 2015, the losses amounted to 50 kilos a week. This has been reduced to just seven or eight kilos, according to the school’s authorities.

Students are served three meals a day at the full-time school, whose 322 students attend from 7 am to 5 pm.

The campaign started with a few students under the guidance of teachers. They monitored the food wasted in the school kitchen, carried out surveys on nutrition, and talked with other students and the cooks to adapt the meals in order to make them tastier and reduce waste.

Besides cutting economic losses and boosting a healthier diet in schools, with more salads and lower fat, the campaign is helping to improve family habits, said 14-year-old Marcos Rodrigues, one of the campaign’s leaders. 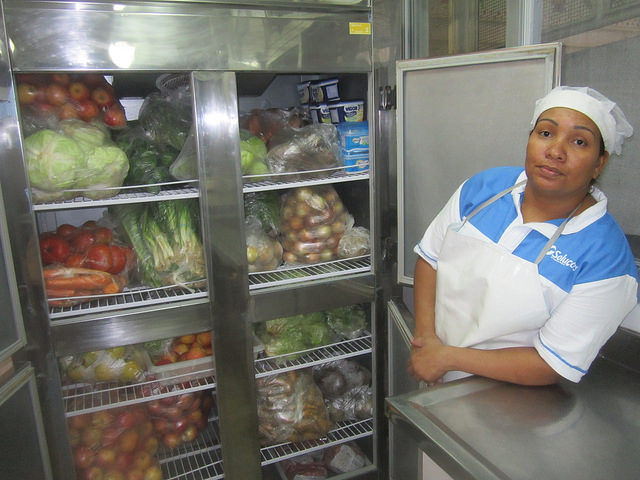 The refrigerator of a public preschool and daycare centre in the city of Vitoria, full of locally-produced fruit and vegetables. In Brazil, the obligatory supply of at least 30 per cent of the food for school meals from family farms has improved nutrition among the students and has promoted local development. Credit: Mario Osava/IPS

“Families adopt our habits, even though we only eat dinner at home. Now we eat more vegetables at home. I used to be fat, but I lost weight doing sports and eating food with less calories, and today I have my health under control,” the teen-ager told IPS.

But it is “in the acceptance of healthy foods where we need more effort, in light of an international scenario of increasingly industrialised products which offer great convenience,” said Moreira Pinto.

Most of the fruits and vegetables served in schools in Vitoria come from Santa Maria de Jetibá, a hilly municipality 90 km away, populated by Pomeranians, a European ethnic group that used to occupy parts of Germany and Poland, who scattered at the end of World War II.

Pomeranian immigration to Brazil occurred mainly in the late 19th century, to Espírito Santo, where they maintained their rural customs and their language in a number of municipalities where there are big communities.

“Santa Maria is the most Pomeranian municipality in Brazil and perhaps in the world,” according to Mayor Hilario Roepke, due to both the number of inhabitants as well as the preservation of a culture that has disappeared or has changed a lot even in their native land.

“Of nearly 40,000 inhabitants, 72 per cent are still rural,” allowing the municipality to occupy first place in agricultural production in the state of Espírito Santo and eleventh in Brazil, and the second leading national producer of eggs: nine million a day, said the mayor.

The 220-member Cooperative of Family Farmers of the Serrana Region (CAF) is the biggest supplier of food to schools.

“The school feeding programme in Vitoria´s metropolitan region is our main market,” said Maicon Koehler, an agricultural technician for CAF. Greater Vitoria has a total population of nearly two million.
With 102 municipal schools, the city buys nearly 20 tons of meat and 6.3 tons of beans a month to feed its almost 500,000 students, estimated the coordinator of the sector, who explained that the amounts of fruits and vegetables vary, depending on the season.