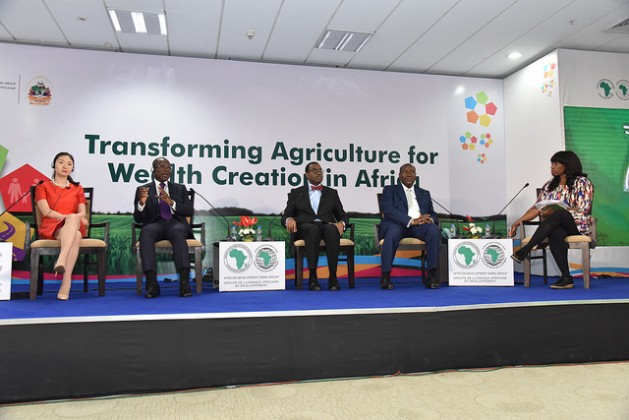 AHMEDABAD, India, May 29 2017 (IPS) - There are nearly 420 million young Africans between the ages of 15 and 35 today. And it is estimated that within ten years, Africa will be home to one-fifth of all young people worldwide.

These millions of young people could be a source of ingenuity and engines of productivity that could ignite a new age of inclusive prosperity.

“If we don’t change the labour composition of agriculture in Africa, in the next twenty years, there will be no farmers.” --AfDB President Akinwumi Adesina

But there are no guarantees. Although the continent has shown consistent economic growth in the last decade, it has failed in creating the number of quality jobs needed to absorb the 10-12 million young people entering the labour market each year.

And this, according to AfDB Vice President for Agriculture, Human and Social Development, Jennifer Blanke, is a time bomb waiting to explode.

“While the youth population is Africa’s asset, it can also easily become a liability, and this is the whole question about demographic dividends,” observes Blanke. “Let us be clear, it is only the existence of opportunity and the young person’s belief that they can access that opportunity that prevents pessimism and political unrest…inaction is not an option, young people without opportunity, and more importantly without belief in their leaders’ ability to provide opportunity are a certain source of civil unrest and we are seeing it every day.”

‘Transforming Agriculture for wealth creation in Africa’ was therefore the major theme of the 52nd AfDB Annual Meetings held in Ahmedabad, India from 22-26 May 2017.

Experts here agreed that transforming Africa’s agriculture requires a business approach that would incentivize youth who still see farming as way of life for the poor. As a result of this scenario, the average age of farmers in Africa is 60, and Akinwumi Adesina, AfDB Group President, fears that “If we don’t change the labour composition of agriculture in Africa, in the next twenty years, there will be no farmers.”

But the how question is crucial, and he points to finance among other incentives. “There are opportunities for youth but certain things have to be put in place to realize them, such as financing…our young people are doing amazing things with ICT—they are providing weather index insurance, extension services and a host of other things.”

For its part, the Bank has provided a roadmap for the growth of agriculture in Africa with a plan to inject nearly 2.4 billion dollars every year for 10 years to build roads, irrigation infrastructure and storage facilities to attract high-value investors.

With this kind of investment, AfDB wants to transform Agriculture into a money-making business for those involved, highlighting that Africa should position itself to benefit from the growth of agricultural food markets which are set to grow to a trillion-dollar business portfolio by 2030.

The figure is huge and appetising. But certain steps have to be taken, and one of those steps is closing the infrastructure gap.

According to Thomas Silberhorn, Germany Parliamentary State Secretary, “It is important to close the infrastructure gap on the African continent, not just somehow, but in the spirit of the 2030 agenda for sustainable development, by building sustainable infrastructure especially in the energy sector,” he said, adding that it was for this reason that his government was advocating for more support to the African Renewable Initiative of the African Union whose secretariat is hosted at the African Development Bank.

While ICT is usually seen as a sure way of getting youth involved, there is another door to young people’s hearts which agricultural policy makers and implementers have not paid attention to—the film industry.  In Africa, the movie industry is dominated by young people and is emerging as an important contributor to gross domestic product and employment in countries like Nigeria.

However, the entertainment industry–especially the film industry—too often offers unflattering narratives of agriculture and the rural life, showing that real economic opportunities are only found in big cities. Such negative portrayal perpetuates the perception that agriculture is simply a way of surviving for the poor.

To tap into the power and influence of the movie industry, and change these perceptions by projecting agriculture as a profitable and viable economic sector, AfDB brought together Nollywood (Nigerian) and Bollywood (Indian) film makers to this year’s annual meetings to chart the way forward on how to market agriculture as a lucrative business through movies.

Oboli and Omotola pledged to do everything in their power to tell the African agricultural transformation story and change the negative perceptions, especially among young people.

“We have learnt a lot about agriculture and are ready to change the state of affairs through filmmaking,” said Oboli during the Indian Cultural Night and AfDB Impact Awards ceremony where she was a guest presenter alongside BBC’s Lerato Mbele.

As Adesina noted, with 65 percent of the world’s uncultivated land, “What Africa does with agriculture is not only important for Africa: it will shape the future of food in the world.”