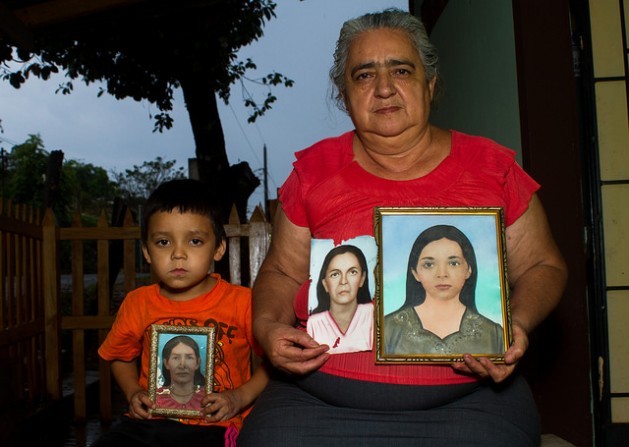 Sofia Romero Pineda, 55, and her grandson hold the few portraits she preserves of some of her family members killed during the military operation which slaughtered some 1,000 inhabitants of El Mozote and neighboring villages in eastern El Salvador. The portraits are of Simeona Vigil, her grandmother; Florentina Pereria, her mother; and Maria Nelly Romero, her sister. Credit: Edgardo Ayala/IPS

EL MOZOTE, El Salvador, May 23 2017 (IPS) - Except for a house with its walls riddled with holes made by bursts of machine gun fire, nobody would say that the quiet Salvadoran village of El Mozote was the scene of one of the worst massacres in Latin America, just 35 years ago.

“Many of us who live here are descendants of those who managed to survive the massacre,” 21-year-old university student Nancy García, who is from this village of about 700 people in the rural municipality of Meanguera, in the eastern department of Morazán, told IPS.

Shelved since 1993 in the Salvadoran justice system, the case known as the El Mozote Massacre was reopened in September 2016, providing a historic opportunity to try soldiers and officers accused of killing more than 1,000 inhabitants of this village and neighbouring hamlets.

The reopening of the case was made possible by a July 2016 Supreme Court ruling that declared unconstitutional the 1993 Amnesty Law which prevented the prosecution of those accused of serious human rights violations during the 1980-1992 Salvadoran armed conflict.

“I cried when I saw the officers sitting there. I imagined them organising the operation and murdering my family, my parents, my 11-year-old little brother, Adolfo Arturo, my pregnant sister.” -- María Dorila Márquez

One of the survivors of the massacre was 79-year-old Juan Antonio Pereira, who was 35 when the military raided Los Toriles, a hamlet near El Mozote. He remembers the four days of terror, from Dec. 10-13, 1981.

From his hiding place behind some bushes, he said he watched the soldiers order people from their homes at gunpoint, including members of his family, and line them up to shoot them.

“You can’t imagine how sad it is to see your family being killed,” the peasant farmer told IPS. He watched his 35-year-old wife, Natalia Guevara, and their two children – José Mario, 10, and Rosa Cándida, 14 – as they were shot to death.

Investigations to clarify the events were launched in 1990, but the case was amnestied in 1993.

Now, the lawyers from the María Julia Hernández Legal Protection organisation and the Centre for Justice and International Law (Cejil), as well as local residents belonging to the El Mozote Association for the Defence of Human Rights, are working together to find those responsible for the massacre and bring them to justice.

Legal Protection tried to reopen the case in 2006, but the initiative was rejected because the Amnesty Law was still in force.

“This is not about vengeance, or about going against the armed forces, but against some elements that were involved in serious human rights violations. What we want is for this not to remain unpunished,” lawyer Wilfredo Medrano, from Legal Protection, told IPS.

On Mar. 29, a court in San Francisco Gotera, the capital of the department of Morazán, held a hearing to notify seven high-ranking army officers implicated in the massacre of the charges against them, which include murder, rape, deprivation of liberty and acts of terrorism.

Among those officials were Generals Guillermo García, a former minister of defence (1979-1983), and Rafael Flores Lima, a former chairman of the Joint Chiefs of Staff.

The investigation will be based on much of the documentary and testimonial evidence already collected when the case was first filed in 1990. 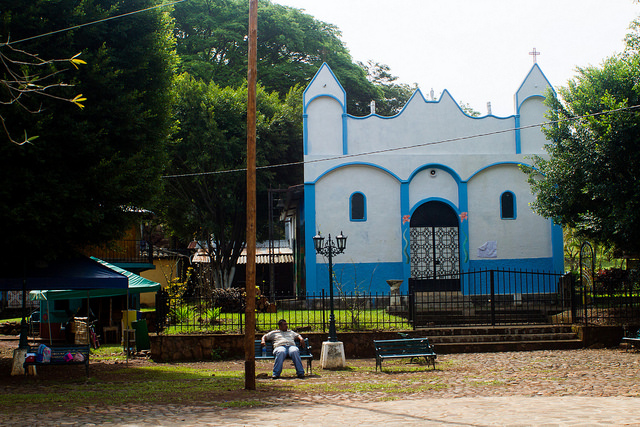 According to the testimonies of the survivors of the El Mozote Massacre in El Salvador, government troops locked women and children in this now rebuilt small church and murdered them in cold blood. Credit: Edgardo Ayala/IPS

“I cried when I saw the officers sitting there. I imagined them organising the operation and murdering my family, my parents, my 11-year-old little brother, Adolfo Arturo, my pregnant sister,” 60-year-old María Dorila Márquez, president of the El Mozote Association for the Defence of Human Rights, who was 25 at the time of the massacre, told IPS.

Márquez estimates that 100 of her relatives were murdered.

The military leadership considered the local population collaborators of the Farabundo Martí National Liberation Front (FMLN) guerrillas – a claim that is denied by the survivors and family members of the victims.

After the 1992 peace deal that put an end to the war, the FMLN became a political party. It has governed the country since 2009, having won two consecutive presidential elections.

On May 6, the same court notified three other officers, who had not been present at the previous hearing, of the charges against them.

“I feel terrible when I talk about this, I remember my murdered father, I have so much anger… If I were closer to those soldiers I would kick them,” said Santos Jacobo Chicas, 40, a native of the village of Cerro Pando, interviewed by IPS at the end of the hearing.

He and other relatives of several victims attended the court proceedings.

“Whoever gave the orders should pay, should go to prison,” he said.

He recalled how the soldiers of the Atlacatl rapid response battalion, an elite force trained by the United States military, killed his cousin’s two-day-old baby boy.

“They set him on fire,“ he said. It is estimated that more than 400 children were slaughtered during the operation.

For her part, Sofía Romero Pereira, 55, who was 19 in 1981, said that at least 35 relatives of hers were killed, including her father and four of her eight brothers and sisters.

She survived because her father, Daniel Romero, managed to get her and three other sons and daughters out of the village, before the troops entered El Mozote, taking them to the town of San Miguel, in a neighboring department.

But when he returned to get the rest of the family, he was caught in the middle of the military raid and was not able to rescue the rest: Ana María, 16; Jesús, 14; María Nelly, 11; and Elmer, just one year old. Ana María was taken to a nearby hill, where she was raped and later murdered, Romero said.

“They should at least admit that they did it, they should apologise, I would forgive them…what good is prison?” she said.

The lawyers from Legal Protection have also requested reopening the case of Óscar Arnulfo Romero, archbishop of San Salvador, who was assassinated on March 24, 1980, while giving mass in the country´s capital.

Meanwhile, the Movement of Victims of Terrorism in El Salvador has asked the Attorney General’s Office to reopen cases of crimes attributed to the guerrillas during the armed conflict.

These include the killings of three US Marines, allegedly executed when their helicopter was shot down by the guerrillas in 1991, while flying over the municipality of Lolotique in the eastern department of San Miguel.

Other cases involve four more Marines, who were shot in a restaurant in San Salvador in 1985, as well as the murders of mayors and other public officials, and of children killed by land-mines placed by the insurgents.

If the petition is accepted, criminal charges would be brought against members of the former guerrilla leadership and officials of the current government, including Salvadoran President Salvador Sánchez Cerén.
“Generally those who demand justice are leftist victims … and we are the voice of the victims of the war that have been forgotten, not only from the right, but also all of those who have been forgotten,” Fernán Álvarez, a lawyer for the Movement of Victims of Terrorism, told IPS.

The 12-year war in this Central American country, with a current population of 6.3 million people, left about 70,000 dead and 8,000 missing.