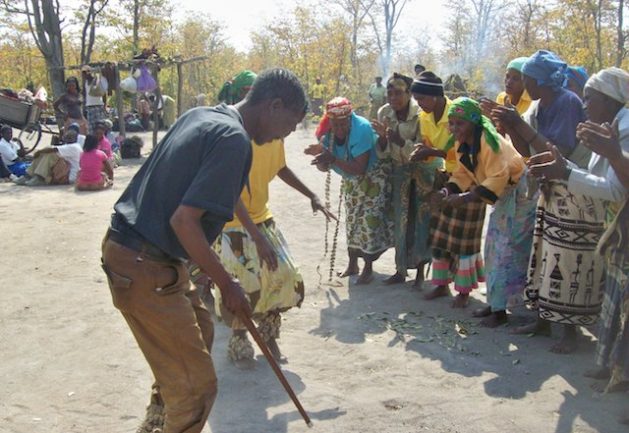 TSHOLOTSHO, Zimbabwe, Aug 31 2017 (IPS) - Sixty-seven-year-old Hloniphani Sidingo gives a broad smile while popping out through the gate of a clinic in her village, as she heads home clutching containers of anti-retroviral pills.

Here, the Khoisan community is found in Matabeleland North’s Tsholotsho district, where many like Sidingo are domiciled. Other Khoisans live in Plumtree in this country’s Matabeleland South province.

Now, with the word spreading far and wide about AIDS awareness, many Khoisans like Sidingo have joined the fight against the disease. And thanks to the Zimbabwean government’s anti-retroviral initiative, she is still alive more than 16 years after she tested positive for HIV.

“I’m so happy. I’m happy I continue to receive my share of treatment pills from government and this keeps me going,” Sidingo told IPS.

“AIDS killed my husband and my children – five of them,” she said. “I’m not taking chances because I want to survive. My husband back in the days didn’t trust community health workers when they approached us urging us to embrace HIV/AIDS tests and get treatment if we have the disease. Ntungwa, my husband, actually thought health workers were up to no good and avoided them, resulting even in our children, who also later died of AIDS, doing like their father,” added Sidingo.

Meanwhile, organisations catering for the welfare of the Khoisan here say the dread and shame surrounding HIV/AIDS is fading among members of the tribe.

“The Khoisan now understand the existence of the (AIDS) virus and almost all who are infected are on ARVs,” Davy Ndlovu, Programmes Manager for Tsoro-O-Tso San, a development trust that aids Khoisan people in Zimbabwe, told IPS.

But while success stories are there to be told about the ancient tribe’s strides in combatting HIV/AIDS, a combination of poverty and ignorance has sometimes disrupted ARV treatment.

“As you might be aware, the San are a poor people and when the nursing staff here once told them not to take the medication on an empty stomach, this was interpreted in that when one had no food for that day, one would not take his or her medication. Due to this ignorance, a number of Khoisan people living with AIDS have lost their lives,” Ndlovu said.

While the tribe now embraces ARV medication, they still face the burden of having to walk long distances to access treatment, according to Tsoro-O-Tso San.

“The other issue has to do with reviews where people are expected to travel to the nearest hospital, which is about 15 to 20 kilometres away. When they fail to raise transport money, they just stay and miss the review,” said Ndlovu.

Despite such hurdles, for Khoisans living with HIV like Sidingo, fighting the disease has become top priority.

“I have learnt to adhere to taking my medication consistently. Many people in my community now understand the importance of getting tested for HIV,” Sidingo told IPS.

Ndlovu said like Sidingo, many Khoisans now live with HIV and are trying to cope with the virus like everybody else, in  a country where 1.2 million people are living with HIV/AIDS, according to UNAIDS.

To Ndlovu, “They (the Khoisan) are no longer discriminated against in the AIDS battle.”

Of the 2,500 Khoisan people domiciled in Zimbabwe, approximately 800 of them now live with HIV/AIDS, about a third of the population, according to Tsoro-O-Tso San.

Meanwhile, the rush to get tested for HIV/AIDS amongst Zimbabwe’s Khoisan tribe comes at a time the tribe stands accused of engaging in careless sex habits, exposing the tribe to the ravages of AIDS.

“The biggest threat is that the San still practice casual sex with no protection at all. Sex among the San is a pastime to be enjoyed and you still find people sharing girlfriends – young and old do this,” Ndlovu of the Tsoro-O-Tso San told IPS.

To do this, NAC works in conjunction with the country’s Ministry of Health to provide anti-retroviral drugs to the minority tribe, a gesture that has put smiles on many HIV-positive Khoisans like Sidingo.

“Back in the years, as the Khoisan we thought our people were being bewitched as we saw them succumbing to AIDS, but thanks to the treatment, we have started to live on even with the virus,” Sidingo told IPS.