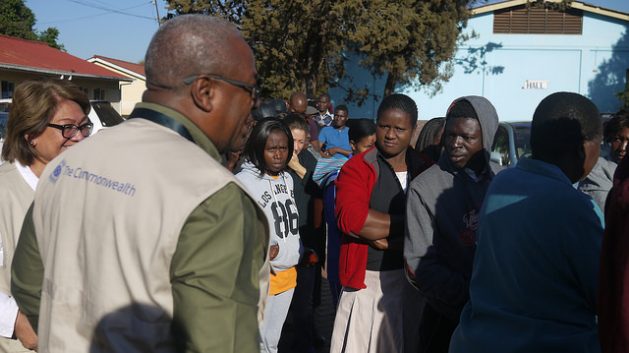 Voters queuing ahead of Zimbabwe's Jul. 30 general elections. The election saw Emmerson Mnangagwa win the presidential race but the opposition has lodge a formal petition challenging the results. Courtesy: The Commonwealth/CC By 2.0

BULAWAYO, Zimbabwe, Aug 13 2018 (IPS) - Many in Zimbabwe are questioning whether the country can break with its horrid past or embrace a new future after a watershed election that saw Emmerson Mnangagwa win the presidential race by a narrow margin and the opposition lodge a formal petition challenging the results in the Constitutional Court.

Mnangagwa–a trusted and past enforcer of former president Robert Mugabe–won the vote by 50.8 percent against the 44.9 percent garnered by Nelson Chamisa of the Movement for Democratic Change (MDC-Alliance).

Mnangagwa’s 2.46 million votes, against Chamisa’s 2.15 million, gave him the mandatory 50+1 percent required to be declared winner.

But the MDC-Alliance on Friday afternoon, Aug. 10, lodged a petition with the Constitutional Court of Zimbabwe challenging the results, halting the inauguration of Mnangagwa that had been slated for Sunday, Aug. 12.

The Constitutional Court will consider the matter over 14 days but political watchers say that what the ruling will be, remains unclear. The court could reject the MDC-Alliance petition and confirm Mnangagwa’s win, or it could confirm Chamisa’s presented evidence and rule in the opposition’s favour. The court could also order another election, which could be held within the next 60 days.

“The future of Zimbabwe lies in a negotiated settlement now because of what the country stands to lose [rather] than gain if a political resolution is not found soon.” -- Political analyst and human rights activist, Effie Ncube.

Political analyst and human rights activist, Effie Ncube, says that should the court rule in favour of Chamisa and order a rerun, this could stoke tensions. He says that a preferred solution would be inclusive discussions out of court between Mnangagwa and Chamisa.

“Keeping away from a re-run is the best solution for Zimbabwe because the tension on the ground now is not ideal for an election without triggering violence,” Ncube tells IPS. “The future of Zimbabwe lies in a negotiated settlement now because of what the country stands to lose [rather] than gain if a political resolution is not found soon.”

Mugabe may have been ousted, but his brutal legacy lingers over a country desperate for a fresh start. Zimbabwe’s Jul. 30 elections–the first since Mugabe was toppled last November–did not disappoint on the dearth of harmony. Violence, in all its forms, has been emblematic of Mugabe’s rule and is something that president-elect Mnangagwa sought a clean break from.

But violence, intimidation, killings and disputed results soiled the elections.

Two weeks ago police clashed with opposition supporters who staged a demonstration outside the offices of the Zimbabwe Electoral Commission (ZEC) over the delayed announcement of the presidential election results. The army fired on protesting supporters, killing six people and injuring scores more. The tragedy stained the polls despite pleas from both the ruling Zimbabwe Africa National Union-Patriotic Front (Zanu PF) and the opposition MDC for a violence-free election.

“Mugabe’s legacy of brutality has returned to haunt us again but at least it was clear who was in charge,” Dumisani Nkomo, director of Habakkuk Trust, a civil rights advocacy organisation, notes. “Right now it is not clear who is charge and many centres of power seem to have emerged and even within the army there appears to be many centres of command as evidenced by the mystery of who deployed soldiers in Harare.”

Nkomo says the credibility of the electoral process has been severely eroded by issues around the voters roll, postal voting and election results.

“This is a really complex situation because contested election outcomes have been an issue since 1980 and more visibly in 2000, 2002 and 2013 and we seem to be moving in circles,” Nkomo tells IPS. “The election result cannot in all honesty be termed free and fair because of the uneven playing field and the clampdown on civil liberties after the announcement of the results.”

The elections had a semblance of being free on many fronts; the polls were relatively peaceful, there was a new biometric voters’ system, a well-organised and resourceful ZEC, and a plethora of candidates and parties vying for power.

While observers from the Southern African Development Community and African Union have endorsed the elections as free and fair, the European Union has pointed to irregularities.

Economist and lawmaker, Eddie Cross, says he expects the presidential ballot to stand up to the court challenge.

“Any legal challenge should therefore be short lived,” Cross said in post-election commentary on his website. “The big challenge facing Emmerson Mnangagwa is now to unite the country under his leadership and heal the wounds of past battles–the struggle for independence… the struggle against the MDC since 2000 with 5,000 abductees, tens of thousands beaten and tortured, hundreds of deaths and the near total destruction of the economy, all in the name of fighting the restoration of real democracy.”

Mnangagwa has scoffed at the idea of a government of national unity, an arrangement his predecessor, was forced to enter into in 2008 with the opposition MDC, which had been led at the time by the late Morgan Tsvangirai.

“Not that it’s a bad idea, but it doesn’t show that there is any need. I am saying politics should now take the back seat because the elections are behind us. We should now put our shoulders to the wheel for purposes of modernising our economy, growing our economy together. Those who have voted against me, those who voted for me, we say Zimbabwe is ours together.”

In spite of the violence that has marred the election outcomes, Zimbabwe was banking on a smooth assumption of power as a ticket into the fold of the international community.

However, in a move set to pile pressure on the new government to double its effort to reengage the international community and institute a raft of political and economic reforms, the United States last week renewed sanctions on Zimbabwe, which have been in place since 2001.

The economy remains a key challenge Mnangagwa has to address swiftly.

The country needs an economic vision to ensure growth, unlock business opportunities, jobs, restore trust in the banking sector and hopefully bring back a local currency.

“Mnangagwa has the opportunity to turn the country round, he has made the right pronouncements on the economy that he needs to follow up with action. I think he wants to play a [Nelson] Mandela come in as a person who transforms the country and moves it to democracy and move away from the dictatorship,” says Ncube.

“Should the court confirm Mnangagwa as the winner, there could be less tension. But the credibility and legitimacy of the regime will be questioned and that will challenge its ability to organise international investment and undermine political stability.”