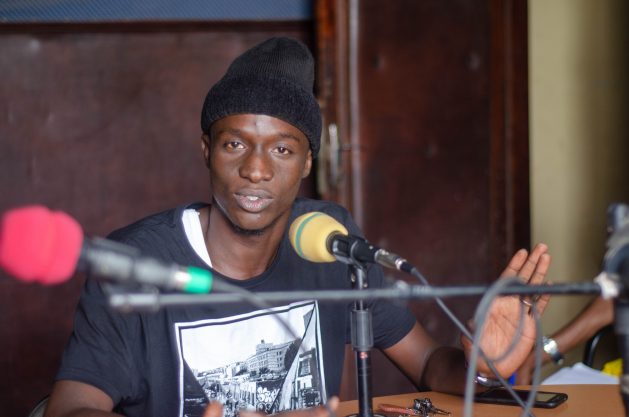 DAKAR, Sep 8 2018 (IPS) - El Adama Diallo left his home in Senegal on Oct. 28, 2016, with dreams of reaching Europe in his heart and a steely determination that made him take an alternative, dangerous route to get there despite the absence of regular migration papers in his pocket.

It was a journey that took him from West Africa—through Mali then to Agadez in Niger and across the Sahara desert—to a southern oasis town in Libya.

“There is no love and games that side. Blacks are betraying their own brothers and giving them away to Arabs. They are the ones that are negotiating the ransom on behalf of their Arab bosses.” -- El Adama Diallo, returnee migrant.

It was a route populated with heavily-armed human traffickers, bandits and the still-alive bodies of migrants like him, emaciated and weak from lack of water and food who had been left behind to die under the blazing North African sun.

“All the roads leading to Agadez, and eventually to Libya and Italy are dangerous,” he told IPS on the sidelines of a live broadcast on Radio Afia Fm on Monday, Sept. 3, from the station’s base in the bustling township of Grand Yoff, in the Senegalese capital Dakar.

For me, the dream of reaching Europe irregularly is over, and I call on all who are considering irregular migration to stop it now, 32-year-old Diallo said.

Diallo has much to say about his experience. He finally was able to return to Senegal on Dec. 5, 2017 with the International Organization for Migration (IOM), which has been working in coordination with the United Nations Refugee Agency and the Libyan government to assist migrants who want to return home.

He now wants to inform others about his experience. Diallo has become a volunteer in an innovative awareness-raising campaign by IOM called Migrants as Messengers (MaM). MaM is a peer-to-peer messaging campaign that trains returning migrants to share their stories of the danger, trauma and abuse that they experienced while attempting irregular migration. The stories are candid and emotional testimonials.

As is Diallo’s own story.

Diallo arrived in Sabha, southwestern Libya and found “almost the whole of Africa was there; Malians, Gambians, Ivorians, Nigerians and others.” From there he hoped to go to Tripoli to catch a boat to Italy. But he was immediately kidnapped by gangs posing as human traffickers.

“They demanded a ransom of [about USD800] for my freedom, which was paid a week later by my family back in Senegal,” he said.

Being caught by human traffickers showed him that race or nationality did not mean solidarity when it came to making a profit.

“There is no love and games that side. Blacks are betraying their own brothers and giving them away to Arabs. They are the ones that are negotiating the ransom on behalf of their Arab bosses,” he said.

But after being released he spent about 10 months in Libya, still waiting to travel to Italy. He was eventually arrested by security forces and held, along with thousands others, in a detention centre in Tripoli in such inhumane conditions that eventually, he knew; all he wanted to do was to return home.

He stayed for two months in cells that were so overcrowded “we were piled on top of each other like fishes.”

“Some people slept standing and others spent the night in stinking toilets, and we only ate once a day. It was terrible,” Diallo explained.

He endured it until he was given the opportunity to return home with IOM.

Explaining the dangers to others

Mamoudou Keita, a reporter at Radio Afia, told IPS that community radio stations were the right platform to debate this issue.

“Community radio is close to people on the ground. I think it’s a good communication strategy. However, it must not be limited to the media. It must descend to the streets, mosques and churches to ensure that the message is understood everywhere,” Keita said.

“Besides, the marketplaces are also good places to spread the word because some mothers are funding their children’s [irregular] trips to Europe. They must be told that it’s morally wrong and dangerous.”

El Hadji Saidou Nourou Dia, IOM Senegal spokesperson, told IPS that his agency was working with 30 community radio stations affiliated to Association of Union des Radio Associatives and Communautaires du Senegal (URAC) or Community Radio Stations of Senegal. The stations are based in Dakar, Tambacounda, Kolda and Seidhou, which are regions most affected by irregular migration.

He said the stations were owned and managed by people who were leaders in their respective communities and that people listened to and considered their advice.

“Our partnership, which is expected to end in December 2018, consists among others of building capacity of radio journalists as how to best treat information related to migration,” he said.

“When a migrant speaks about his own experience, the things that he went through, that surely has the power to make the candidates to irregular migration think twice before they take that route,” Dia said.

•           Getting returning migrants to talk and debate about their failed travelling experiences in North Africa,

•           Inviting specialists to discuss the challenges of migration,

•           Educating communities through radio dramas, which have been drawn from international cartoons and adapted to Senegal.

It is possible to be successful at home

A radio programme similar to the one that Diallo was on this week was also hosted last week in Pikine, east Dakar, on Radio Oxy Jeunes Fm.

“It’s still possible to harvest success by staying at home,” the tall artist, who has a single called “Stop Irregular Immigration,” said.

“I saw with my own eyes people dying in the Sahara Desert, and women getting involved in prostitution to survive when they ran out of money. Also, human traffickers rape the same women they are supposed to help reach Europe,” he said during an emotionally-charged show hosted by Oxy Jeunes radio journalist Codou Loum.

Founded in 1989, Oxy Jeunes Radio Station is believed to be one of the oldest community broadcasters in West Africa, and has a listenership of about 70 percent of Dakar’s one million people.

Ndiaye spent two months in Libya in 2016 and paid about USD1,400 to human traffickers to help him get to Italy.

But he never made it.

Asked if he was aware that parents were funding their children’s trips to North Africa and eventually to Europe, he replied: “Stop putting pressure on your children to become rich quickly to support the family.”

“Paying for their irregular trip to Europe is not a good thing to do because if these children get killed, it will be a big loss for you.”

African governments need to do more for their youth

Ramatoulaye Diene, a legal migration activist and radio personality, who was also on the show with Ndiaye, said migration was everyone’s right. However, she stressed it has be to done in a formal and legal way to avoid people falling into unpredictable traps.

Diene, while echoing the rapper’s sentiments that it was still possible to make it in Africa, appealed to African governments to create a youth-friendly environment that would persuade young Africans not to embark on such dangerous journeys.

“I think African governments have failed in their duties to help the youth thrive and improve their lives right here at home. They must support the youth through adequate youth employment programmes and legal migration policies.”

Diallo echoed the same sentiments when he spoke about the reasons for irregular migration.