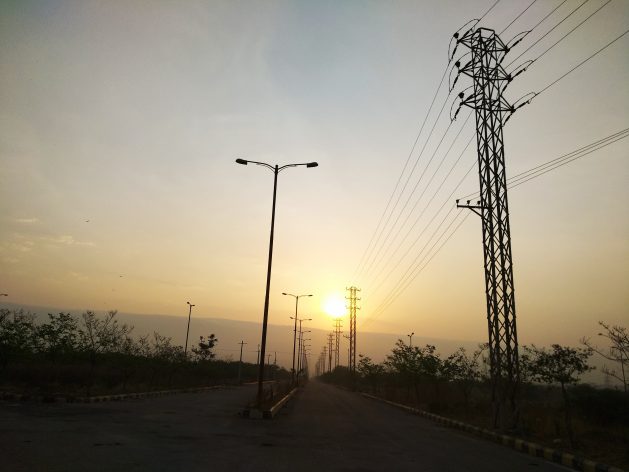 The Indian government launched the Saubhagya scheme in 2017 and aims to provide electricity across the entire country. Credit: Stella Paul/IPS

NEW DEHLI, Oct 31 2018 (IPS) - Even in remote and faraway places such as Andamans and Nicobar and Lakshadweep, islands off the coast of India, the government is keen to provide electricity across the entire country.

Last year it launched the Saubhagya scheme, which is about providing energy access to all. While the government is making progress, “it would be good to replace current diesel-based electrons with renewable and storage-based solutions. GGGI has already demonstrated this in Indonesia and proved that such shifts are commercially viable,” says Shantanu Gotmare, head of the Global Green Growth Institute (GGGI) India office.

In an exclusive interview with IPS, Gotmare speaks about innovative ways that India can curve its carbon footprint and achieve a greener economy.

He says another innovative way for India to become 100 percent electricity-capable is through a smart meter rollout.

“Although there is money, there is no proper structuring right now. A properly structured smart meter rollout can help save a lot of electricity waste through improved monitoring and data capture, automatic billing and efficient communication, and the saved power can be used to electrify several households. This is another area where GGGI can help the government,” he says. IPS: Is there a place where this smart meter rollout has taken shape?

A: At present, it is a priority for the government of India. India is committed to renewable energy and the day is not very far when people will see renewable energy in their neighborhood, but in a country where access to energy is still an issue, probably this still has to wait for a few years.

IPS: The latest IPCC report has just been made public and it states that the world only has 12 more years to keep the rate of global warming under 1.5 degrees. Keeping this in mind, can you tell us about your work on carbon mitigation in India and what are the three most important features of this work?

A: Reducing the carbon intensity is one of India’s Nationally Determined Contributions (NDC) goals. The country has clearly stated that by 2030, the carbon emission intensity of its GDP will be reduced by at least 15 percent. Now, if you read the IPCC report, there are multiple activities that can be done to reduce the emission.

1) Green mobility: GGGI has helped the government of Himachal Pradesh to introduce electric buses and is now doing it in two other states, including Karnataka.

2) Resource efficiency of water: In big cities, there is no account of the water that is treated and supplied by the municipality. This is almost like electricity which is stolen and is not accounted for. So we are looking at ways to get that water accounted for.

3) Effect of climate change on livelihood: We are about to launch a study to see how climate change is affecting livelihoods in the consumer commodity sector. Based on this study we will see what business models can be adopted to mitigate climate change in the tea and coffee sector.

IPS: Which are some of the easy and affordable ways for India to reduce its carbon footprint by reducing plastic use?

A: Recycling building materials is a very simple and doable way. All over the country, the construction waste always goes to the landfill. Instead, this can be recycled and used to build pavements or bricks.

Secondly, everywhere these days people are building pavements and parking areas by using concrete layers which do not allow any water to percolate. Simple steps like making these layers porous can help the water flow freely to the ground, rainwater can easily percolate and groundwater can be recharged. If some financial designs, some business models and some regulations can be brought around this, it can bring around some industries and help strengthen the economy.

IPS: These measures sound so simple, yet why did nobody think about it?

A: Well, that is because we were not conscious about it. I think it’s like the ‘#metoo’ movement where there is consciousness before people start thinking and acting on it. Then of course there has to be finance which will come only when there is a market, which again happens when there are regulations.

IPS: In the environmental sector, those who have concrete ideas don’t have access to money, and those who have money say there are no bankable projects. What is your take on this?

A: I think it’s not that there is no capital or no opportunities. The rate at which the finance is available is the major issue. The cost of project developers or people who want to build a sustainable business – that is one issue and the second issue is lack of regulations to create the market. For example, when India announced that it wanted to produce 175 gigawatt of renewable energy, the rates were brought down from 6-7 rupees per units of electricity to 2-3 rupees. So there are regulations like this for the government to bring which can pave the way for the market to open up.

The other issues are sensitising people to accept the rate at which finances are distributed, financial restructuring and creating incentives for those who take steps for greening the economy like building green buildings.

IPS: We often hear people –particularly small, grassroots organisations- complain that their proposal was rejected by the Green Climate Fund because it wasn’t framed well. How can GGGI help?

A: We have done the readiness proposals which are built around the capacity in around eight countries across the world. We would love to partner with the government of India to help all of its accredited entities to access the GCF fund. GGGI has a very niche sort of knowledge in that and very specialised knowledge in accessing the GCF finance. We have conveyed this to the government and it’s now under consideration.