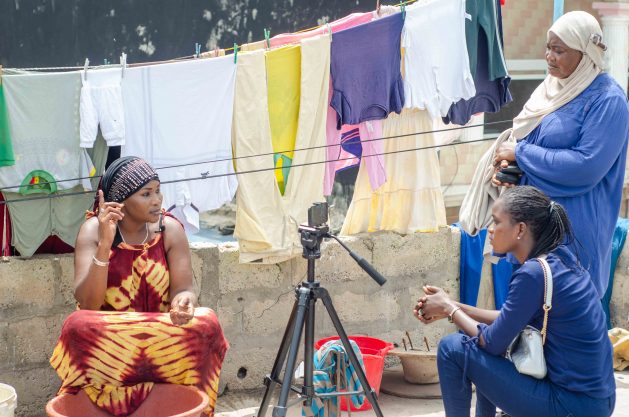 Daro Thiam (left), a returnee migrant from Mauritania is being interviewed by Khoudia Ndiaye (centre) and and Ndeye Fatou Sall (right) in Hann Bel-Air, a neighbourhood in Senegal’s capital Dakar. Courtesy: International Organization for Migration (IOM)

DAKAR, Oct 11 2018 (IPS) - Khoudia Ndiaye and Ndeye Fatou Sall set up a smartphone on a tripod to begin recording a video interview with Daro Thiam in Hann Bel-Air, a neighbourhood in Senegal’s capital Dakar. Hann Bel-Air is the departure point for many of the migrants who leave the city and country on irregular routes – boats to Spain, crossing the Sahara desert to the Mediterranean Sea, or to countries nearby.

Thiam, a mother of four, has recently returned from Mauritania, where she was unable to find a job to support her children.

"If you want to go overseas, get your papers in order and have a contract well signed and legalised, and buy medical insurance. If you cannot get these, please stay at home and look for any job, even in cleaning.” -- Ndeye Fatou Sall returnee migrant.

The three Senegalese women on a sunny rooftop near the beach have something in common: they are all migrants. Each of them left their home country to better their lives and support their families. But this afternoon is about Thiam’s story.

Ndiaye and Fatou Sall clip a microphone on Thiam’s dress then stand behind the tripod, counting down to the first question. They ask Thiam, “Why did you decide to leave home and where were you travelling to?”

Thiam answers in their native language, Wolof. The women nod; a sense of shared understanding is tangible among them.

They continue, reading other questions off the mobile application created for interviewing migrants: “What family members or people were you trying to support?”

“How did your family react to your return?” they continue.

The women are getting to know one another. After the interview, they will share their own stories with Thiam, and that is the point. The Migrants as Messengers (MaM) awareness-raising campaign, developed by the International Organization for Migration (IOM), uses innovative mobile technology to empower migrants to share their experiences and to provide a platform for others to do the same.

By capturing the migration experiences on-camera and sharing the videos on Facebook, the campaign aims to educate potential migrants and their families about the risks involved in irregular migration. It also presents alternatives to migrating on routes that run dangerously through the desert, on to the Mediterranean Sea, and often lead to indefinite detention in North African countries like Libya.

MaM, funded by the government of the Netherlands, is a regional project run in Senegal, Guinea-Conakry, and Nigeria. It trains migrants who return home, like Ndiaye and Fatou Sall, in videography, interviewing, migration reporting, and online advocacy, so they can volunteer as ‘citizen journalists,’ or more appropriately, ‘migrant messengers.’ So far, IOM has trained nearly 80 migrants, referred to as Volunteer Field Officers, across the three participating countries; about one-third of the volunteers in Senegal are women.

Law student Ndiaye is a returnee from Morocco, and Fatou Sall is a mother of five who lived and worked as a domestic worker in Saudi Arabia for nine years. Ndiaye and Fatou Sall returned to Senegal in 2013 and 2017, respectively. They were recently trained alongside four other women – Maty Sarr, Aissatou Senghor and Fatou Guet Ndiaye – and four young men to become migrant messengers.

Fatou Sall experienced a difficult nine years in Saudi Arabia and is prepared to be open with others about what life truly was like. There comes from her an honest and heartfelt sharing of her former life.

“Everything I’ll say comes from the heart because it is the experience that I lived and that I am willing to share with others. I tell them right away ‘don’t go without regular papers because it is not easy that side’.”

She is happy to be part of the MaM campaign “and satisfied to be participating in this training, which I put to good use to create awareness about travelling [irregularly] when my association’s activities kick off.”

Since her return in 2017 she founded an association for former female migrant workers to Saudi Arabia called ‘Association of Senegalese Women Former Residents of Saudi Arabia’.

My family welcomed me back

" My parents were so happy when I came back. They did not care that I had failed to go to Europe, they were happy I was alive and they welcomed me with loving arms…" listern to Mercy's story about how she was not ashamed to come back home. #MigrantsasMessengers

Posted by Migrants as Messengers on Wednesday, September 19, 2018

She says that while she was paid USD 700, as opposed to the USD 200 she could get as a domestic worker at home, migrating irregularly was not worth it. She says she was fortunate that when she was ill her employer would pay for her doctor’s bills, but this would come out of her own salary.

“If you want to go overseas, get your papers in order and have a contract well signed and legalised, and buy medical insurance. If you cannot get these, please stay at home and look for any job, even in cleaning.”

She says that as a woman who experienced a difficult life overseas she doesn’t want other women to go through the same thing.

“It’s a lonely life out there, and as a woman and mother, most of the time you think about your family, especially if things begin to fall apart. The employment agencies operating in Dakar sold us to those Arab bosses as slaves and we worked endlessly, 24 hours sometimes with no pay.”

“I’m not forcing people or women to stay in Senegal, but if they don’t have the necessary documents, and think that they will get everything there, they are deluded.”

Ndiaye, who travelled to Morocco with papers in the hope of finding a job at a call centre, recounts a terrible tale of racism.

“I witnessed many stabbing and beating incidents by Moroccans on blacks and I became very scared to go out. The Arabs provoke black people and beat them up, steal their phones in broad daylight, and sometimes stab them. Life is very hard in North Africa, especially if you don’t have papers,” the law student explains.

“It’s also heartbreaking to see pregnant women embarking on such a dangerous adventure and suffering there. In the end, I thought returning home was the best option. Women, especially mothers, should stay home with their children.”

Fatou Guet, another returnee from Mauritania, who attempted to reach Spain on a makeshift boat, pleaded against travelling irregularly to Europe.

“Our trip lasted 10 days and we failed somewhere in the Mauritanian waters, where some people drowned and I got very sick and also nearly died. It is not good at all,” she tells IPS emotionally.

He never thought the journey would be so tough …

Iwu thought that the journey across the desert would be easy. Many like him are deceived into believing that the irregular migration journey is easy. Listen and share his story. What are your thoughts?

Posted by Migrants as Messengers on Tuesday, June 12, 2018

But the experiences of these women and others who have attempted irregular migration have not gone unnoticed.

To date the IOM has close to 23,000 followers on their MaM Facebook page, 90 percent of whom are from Nigeria, Guinea-Conakry and Senegal.

College student Aminata Fall (23), who has been following the MaM campaign on Facebook, describes it as “genius”.

“It’s an emotionally charged campaign where some shocking stories are being told by brave and courageous people. You must be a mad person to travel [irregularly] to North Africa after watching these videos. Ha, surely it’s hell on earth out there,” Fall tells IPS.

IOM digital officer Marshall Patzana explains to IPS that they post new videos daily to “flood the online space with first-hand testimonies of the journey so as to counter the narrative that the smugglers are peddling online.”

“Our videos are usually between 30 seconds to a minute in length and as of last week the videos on the page have been viewed for a total of 30,590 minutes. Our content has reached over 550,000 people online since we started the Facebook page in June,” he says.

Patzana says the Facebook page creates a hub for returnees to interact amongst each other and to share best practices on how to reach out to their communities and advocate for regular migration.

Content produced by returnee migrants is also uploaded here and creates an online library of testimonies for anyone who wants to learn more about the journey.

“There is [also] a closed group where returnees from the different countries share their own personal stories and provide each other with peer support,” Patzana explains.

The IOM plans to extend the project into 2019 and to expand to three or four additional West African countries.

While they plan to reach more people, the women who are currently sharing their stories with others have hopes and plans for the future too.

Fatou Sall hopes that her association, which is based in Rufisque, will get more funding and kick off with activities soon.

Ndiaye thinks that her life would not have progressed as it has if she had not returned home. The master’s degree student will qualify soon. “Five years down the line, here I am, I’m about to finish my master’s in law. Next year I’ll be done, something that would have been impossible if I was in Morocco waiting for a job.”