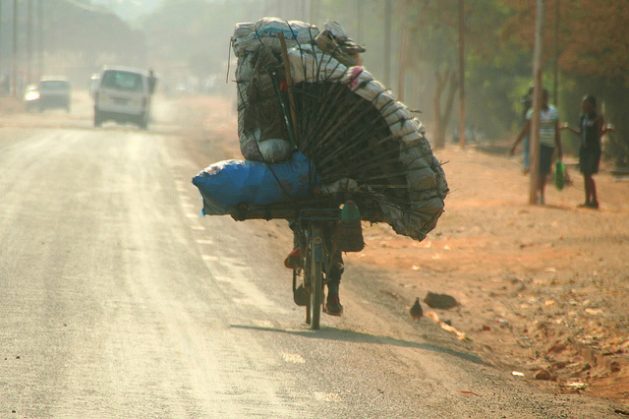 BULAWAYO, Zimbabwe , Oct 15 2018 (IPS) - In Africa, over 640 million people – almost double the population of United States – have no access to electricity, with many relying on dirty sources of energy sources for heating, cooking and lighting.

While not offering a solution to the electricity gap in Africa, Brian Kakembo Galabuzi, a Ugandan economics student, can offer a cleaner and cheaper solution.

Galabuzi is the founder of Waste to Energy Youth Enterprise (WEYE), which is registered as a limited company that makes carbonised fuel briquettes from agricultural waste materials and organic waste.

Galabuzi got the idea after networking with other students concerned about global energy poverty at the 2015 International Student Energy Summit in Bali, Indonesia. Energy poverty is defined as the lack of adequate modern energy for cooking, warmth, lighting, and essential energy services for manufacturing, services, schools, health centres and income generation.

WEYE was created with the basic idea of commercialising grass root bio-waste to energy solutions in order to create a youth-led clean cooking transition in Uganda.

“We believe that the benefits of sustainable energy, such as time saving, clean air, environmental conservation and good health are not what the highly-unemployed youth what to hear,” Galabuzi tells IPS.

“The majority of the world’s population is youth – of which the biggest population is unemployed. This why we designed a solution based on financial benefit (income generating opportunity) for unemployed youth and women,” he says.

Africa is energy rich but nearly two thirds of its population of more than 1,2 billion have no access to electricity.

The African continent has an estimated 10 terawatts of potential solar energy, 350 gigawatts (GW) of hydroelectric power and 110 GW of wind power. All these sources can be harnessed with the right investment, a 2015 study by influential consulting company, McKinsey & Company found.

However, poor investment in off-grid connections in Africa means that polluting fossil fuels and biomass are major energy sources. However, off grid connections can provide clean and affordable energy to millions of people while helping reduce carbon emissions and preventing indoor pollution.

Growing energy demand in Africa and other developing economies presents an urgent need for the promotion and provision of more affordable and cleaner energy. Wood, charcoal, grass and solid waste, such as animal and human waste, are forms of biomass that can be converted into fuel and used as energy sources. 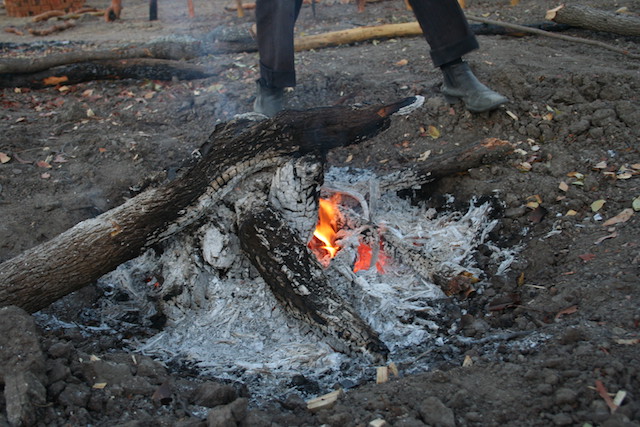 In Africa, over 640 million people have no access to electricity, with many relying on dirty sources of energy sources for heating, cooking and lighting. Credit: Busani Bafana/IPS

While acknowledging that his company is not the first to make briquettes, Galabuzi says what is unique is that the briquettes are made from organic waste materials and sold to institutions that use firewood – 80 percent of which harvested in Uganda. Recent studies indicate that Uganda is at risk of losing all its forest in 40 years unless it halts deforestation. This is largely due to population growth and increased demand for land and firewood energy.

Galabuzi says despite the presence of solar, hydro power and gas as alternative sources of cooking energy, fuel briquettes are affordable and efficient energy alternatives.

A pilot of the fuel briquettes at St. Kizito High School, a school based in Kampala, Uganda’s capital, and the first school to adopt WEYE’s technology, showed encouraging results. Galabuzi explains the school registered an annual financial saving of over USD 2,500, a 50 percent reduction in cooking time and increased job satisfaction among the cooking staff due to the healthy, clean and smokeless cooking conditions.

“Our project uses organic waste from farmers and food markets such as maize cobs, banana peels and many others, which were considered useless,” he says.

“We offer the farmers and waste collectors monetary value for this organic waste and give them a new avenue to generate income, boosting the agricultural and waste management sectors.”

Galabuzi says his business has the potential of employing over 40 individuals in waste collection, sorting, production, marketing, distribution and finance.  It also has a potential market of over 30,000 institutions in Uganda. Already WEYE is training youth and women how to make briquettes and to start up their own briquette companies, with support from the Uganda government youth fund. 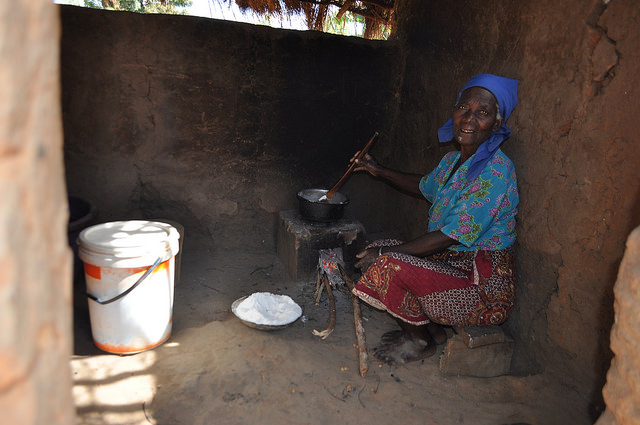 Felistas Ngoma, 72, from Nkhamenya in the Kasungu District of Malawi, prepares food in her kitchen. Credit: Charity Chimungu Phiri/IPS

SE is a global organisation, based in Alberta, Canada. It builds the potential of young people to accelerate subsistence energy transitionthrough training, coaching and mentorship.

The interest in energy by SE, which has a membership of 50,000 young people from 30 different countries around the world, led to a partnership with Seoul-based Global Green Growth Initiative (GGGI) to promote the young ‘greenpreneurs’ programme. This programme gives the youth opportunities to turn innovative ideas into green businesses in sustainable energy, water and sanitation, sustainable landscapes and green cities.

“We got interested in greenpreneurship because a lot of people in our network are interested in energy but are more at a systems level and how energy connects to gender, empowerment, access to clean sources of fuel, access to energy in remote areas and smart technology,” Helen Watts, director of Innovation and Partnerships at SE, tells IPS.

Global discussions on energy, while politicised, have previously been at commercial and academic levels. But SE has opened a platform to promote wider discussions on finding and implementing innovative solutions to solving the energy challenge and help meet the Sustainable Development Goals.

Watts says the partnership with GGGI is an opportunity to open up GGGI’s youth entrepreneurship model, which is country specific, into a global accelerator model with young people from emerging and developing economies. Another organisation, the Youth Climate Lab, an innovation lab space organisation that seeks to build the capacity of young people to participate in the climate policy, innovate and collaborate on climate adaptation and mitigation, has been brought in as a partner.

“Young people have this incredible capacity to break the kind of zero sum game of sustainability of profitability,” says Watts.

SE was started in 2009 by a group of students who worked in the energy industry in Canada and every two years it organises an international summit on the future of sustainable energy as a platform to talk about energy transition.

SE has also developed energy chapters in Africa, the Caribbean, Europe, North America, Oceania, South America and South Asia, which are like student clubs in post-secondary institutions. The chapters are supported to help members develop their green energy ideas into reality in their communities. The first chapters were established in United Kingdom, Nigeria and Canada.

“Energy has really captured me and inspired me to dedicate my entire career to energy transition projects because of how fundamental energy is to our everyday lives,” Sean Collins, a co-founder of SE, tells IPS, adding that the value of energy is embedded in the work of SE that there is consideration of both energy’s striking benefits and its impacts.

“I think the thing I am most proud of has been our work to set the expectation that youth deserve a seat at the table in all energy conversations as a peer with older generations, policy makers, legacy industry and other groups. It is our generation that will be primarily responsible for the practical transition to a lower carbon economy, so we need to be an active participant in these discussions from day one.”

Fostering discussions and implementation of energy innovations creates impact. Businesses like Galabuzi’s WEYE clean energy company can be potential models to provide energy to more 600 million people in Africa who go without electricity.