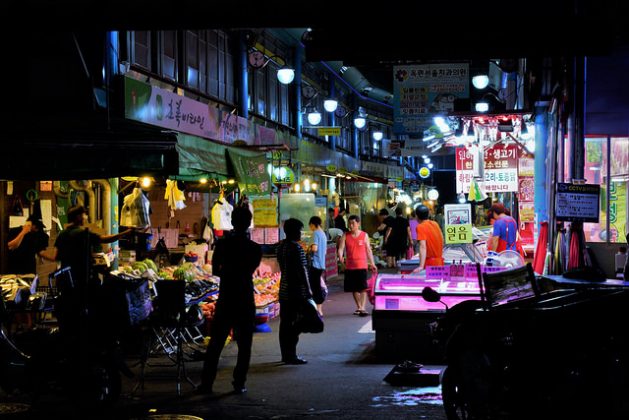 A night market in South Korea. The country plans to ensure that 20 percent of all electricity generated is renewable by 2030. Credit: Yeong-Nam/CC BY 2.0

SEOUL , Nov 1 2018 (IPS) - While major countries have pledged to be powered entirely by renewable energies in order to stop greenhouse gas emissions by 2050, there are a number of states that are investigating ways to implement this transition quickly in order to achieve their goals ahead of this deadline.

They gathered to share their energy transformation experiences from the United Kingdom, Norway, Japan, Denmark, and Mongolia and discussed how South Korea can emulate them as it transitions from a coal and nuclear-centric energy dependence to renewables.

How to accelerate the transition to Renewable Energy?

“As there is a big global shift towards renewable energy (RE), we may ask questions: How can we accelerate the clean energy transition? Is the Korean target ambitious? How fast can it be transitional?” said Frank Rijsberman, director-general of GGGI in his keynote speech.

Although global decarbonisation on its own isn’t adequate to meet the ambitions of the Paris Agreement, the forum shared renewable transition cases and experiences of how they have accelerated the transition to RE.

The UK is leading the low-carbon transition and has implemented a drastic cut of emissions in the past 18 years while also continuing its rapid economic growth. Norway built the world’s electric car capital, and made the transition from oil to a renewable model. In Denmark, Copenhagen has become the world’s green city, as it uses district heating pipelines to heat houses and aims to become the world’s first carbon neutral city by 2025.

The most drastic turnaround comes from South Korea and Japan, which have been among the world’s major producers of nuclear power in the past. But both countries have joined the global renewable energy transition club in recent years.

The forum heard from Hans-Josef Fell, president of Energy Watch Group, an independent global network of scientists and parliamentarians that was founded in 2006 under the direction of Fell while he was still a member of the German parliament. “It is possible to be 100 percent renewable and we can work together with South Korea to reach the 100 percent goal,” he told participants.

Fell forecast that Solar photovoltaic (PV) and wind power will be the cheapest energy in G20 states by 2030, noting that RE has created 10.3 million jobs worldwide in 2017, with most jobs being in Asia.

Fell also noted political will should be strong enough to fully embrace the RE transition, as he suggested the need for direct private investment in RE and zero-emission technology, for tenders to be granted only for capacity above 40MW, and the need to phase out all state subsidies on fossil fuels. 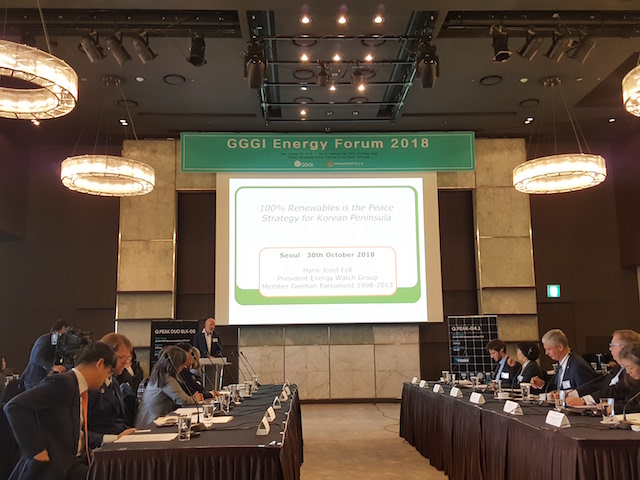 Japan is one of the countries that has shown the will to embrace RE. After committing to reducing its dependence on nuclear energy by 2030, Japan has set targets for becoming an economically independent and carbon-free mainstream power by 2050. Japan has reduced its nuclear power generation following the Fukushima nuclear power plant explosion in 2011.

Izumi Kaizuka, Director of RTS Corporation, a PV consulting company, who presented on the RE policy transition in Japan and the current status and outlook of the country’s PV market, said: “There has been an explosive growth of approved PV projects.”

But Japan has concerns about the future burden of surcharges, installation quality, environmental damage from natural disasters, and the lack of hosting capacity.

“There is a significant cost gap of the PV system between domestic and overseas [prices]. Prices are further decreasing due to global competition. Some emphasise the importance of how installation costs in Japan (not under global competition) will be further reduced,” Kaizuka said.

Japan has tried to address these concerns and introduced a new approval system to deal with delayed or unrealistic projects, to increase transparency for grid connections with disclosure of connection capacity and the price of work, as well as the exemption of surcharge for energy sufficiency efforts.

With these actions taken, Kaizuka had a strong growth forecast for PV-installed capacity in Japan. “Despite these concerns, PV is growing, since PV is stable and affordable,” Kaizuka said.

South Korea to move from coal-nuclear to renewables

Under its Renewable Energy 2030 Implementation Plan to achieve a 20 percent goal of renewable share of total electricity generation by 2030, South Korea is investing in clean energy.

This is a drastic reversal of the country’s previous nuclear-centric energy policy. In 2016, 25 reactors generated one-third of the country’s electricity and made South Korea the world’s fifth-largest producer of nuclear energy, according to the World Nuclear Association.

To reverse its energy mix, Seoul is driving a renewable boom under a private-public partnership.

“Active private investment is supporting the renewable energy transition. More than 95 percent of new capacity is PV and wind, which creates the largest number of jobs,” said Kyong-Ho Lee, Director of the New and Renewable Energy Policy Division, at South Korea’s Ministry of Trade, Industry and Energy (MOTIE).

The local government-led, large-scale projects, where local governments play a key role in selecting sites and choosing business operators, are cited as a major driving force of the on-going RE transition in South Korea.

“To encourage citizen participation, the government gives monetary incentives for both urban and rural renewable energy installed, as well as state loans for rural RE installed. Thus farmers can make a double income from both farming and PV power installed,” said Lee from MOTIE.

“It is a transitional moment as we continue to improve conditions through deregulation of RE, installing and collecting PV modules,” Lee said.

In Norway, financial incentive was strong enough to drive the electric car boom. About 45 percent of new cars sold in Norway in recent months were all-electric cars. People who buy electric cars pay no import taxes, tolls, parking or ferry costs, and are exempt from a 25 percent sales tax at purchase.

“Nationwide infrastructure is necessary to spread the EV [electric vehicle] boom from cities to rural areas,” said Atle Hamar, Vice Minister, Ministry of Climate and Environment, Norway. “In cities, there are enough charging stations but in rural areas, we need public support [to build more].”

Denmark offers the best conditions for using geothermal heat because of the country’s well-developed district heating. In Denmark, boilers provide heat for entire districts through a network of heating pipes.

“We will be testing new technology to find a cost efficient and easier way of heating houses. For example, we are replacing biomass with geothermal heat pumps, which is easier to heat houses,” Jacob Rasmussen, counsellor, energy & environment, Embassy of Denmark.

How fast can it go from nuclear to renewable?

These countries offer great examples for South Korea. And while the forum generally saw a consensus formed on the country’s need to transition to renewables, it debated how fast the transition should be.

South Korea’s transition may be too fast, according to some experts.

“We must respect the role of the nuclear power source [that has driven our economy as the cheapest energy source],” said Sang-hyup Kim, visiting professor from the Korea Advanced Institute of Science and Technology and chairman of the Coalition for Our Common Future.

“In fact, nuclear is a reality [in South Korea] based on its [60 years of] science and technology. Why should we give it up so rapidly?”

To others, the transition may be a bit slow.

“Some would say the 20 percent goal is not ambitious enough. But we should manage our satisfaction by setting a reasonable target,” said Sun-Jin Yun, professor of environmental and energy policy at the Graduate School of Environmental Studies, Seoul National University (SNU).

Panelists agreed on the need to increase inter-Korean energy cooperation to bring peace to Northeast Asia. “Increasing energy interdependence is a way to secure peace for the whole of Northeast Asia. For example, a renewable energy-based grid connecting Mongolia and both Koreas and others can be the way to increase interdependence,” said YangYi Won Young, executive director, Energy Transition Forum, a private energy think-tank.