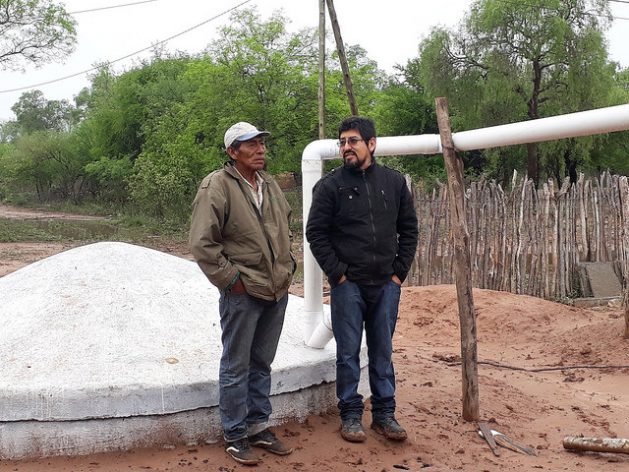 Mariano Barraza (L), a member of the Wichi indigenous people, and Enzo Romero, a technician with the Fundapaz organisation, stand next to the rainwater storage tank built in the indigenous community of Lote 6 to supply the local families during the six-month dry season in this part of the province of Salta, in northern Argentina's Chaco region. Credit: Daniel Gutman/IPS

LOS BLANCOS, Argentina, Nov 6 2018 (IPS) - “I’ve been used to hauling water since I was eight years old. Today, at 63, I still do it,” says Antolín Soraire, a tall peasant farmer with a face ravaged by the sun who lives in Los Blancos, a town of a few dozen houses and wide dirt roads in the province of Salta, in northern Argentina.

In this part of the Chaco, the tropical plain stretching over more than one million square kilometres shared with Bolivia, Brazil and Paraguay, living conditions are not easy.

"I wish the entire Chaco region could be sown with water tanks and we wouldn't have to cry about the lack of water anymore. We don't want 500-meter deep wells or other large projects. We trust local solutions." -- Enzo Romero

For about six months a year, between May and October, it does not rain. And in the southern hemisphere summer, temperatures can climb to 50 degrees Celsius.

Most of the homes in the municipality of Rivadavia Banda Norte, where Los Blancos is located, and in neighbouring municipalities are scattered around rural areas, which are cut off and isolated when it rains. Half of the households cannot afford to meet their basic needs, according to official data, and access to water is still a privilege, especially since there are no rivers in the area.

Drilling wells has rarely provided a solution. “The groundwater is salty and naturally contains arsenic. You have to go more than 450 meters deep to get good water,” Soraire told IPS during a visit to this town of about 1,100 people.

In the last three years, an innovative self-managed system has brought hope to many families in this area, one of the poorest in Argentina: the construction of rooftops made of rainwater collector sheets, which is piped into cement tanks buried in the ground.

Each of these hermetically sealed tanks stores 16,000 litres of rainwater – what is needed by a family of five for drinking and cooking during the six-month dry season.

“When I was a kid, the train would come once a week, bringing us water. Then the train stopped coming and things got really difficult,” recalls Soraire, who is what is known here as a criollo: a descendant of the white men and women who came to the Argentine Chaco since the late 19th century in search of land to raise their animals, following the military expeditions that subjugated the indigenous people of the region.

Today, although many years have passed and the criollos and indigenous people in most cases live in the same poverty, there is still latent tension with the native people who live in isolated rural communities such as Los Blancos or in the slums ringing the larger towns and cities.

Since the early 20th century, the railway mentioned by Soraire linked the 700 kilometres separating the cities of Formosa and Embarcación, and was practically the only means of communication in this area of the Chaco, which until just 10 years ago had no paved roads. 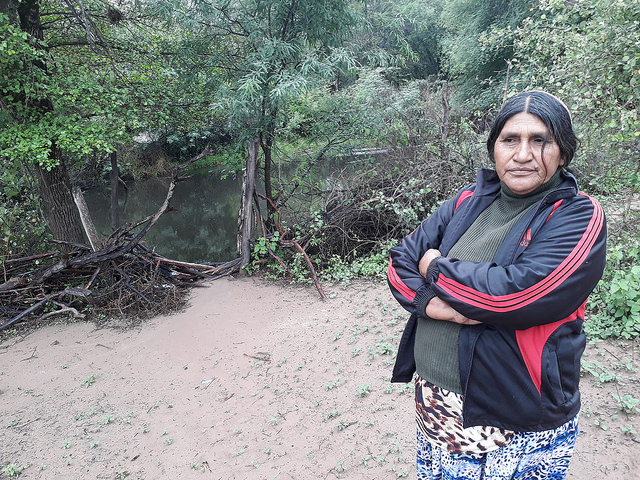 Dorita, a local indigenous woman, stands in front of a “represa” or pond dug near her home, in Lote 6, a Wichí community a few kilometres from the town of Los Blancos, in Argentina’s Chaco region. The ponds accumulate rainwater and are used to provide drinking water for both animals and local families, posing serious health risks. Credit: Daniel Gutman/IPS

The trains stopped coming to this area in the 1990s, during the wave of privatisations and spending cuts imposed by neoliberal President Carlos Menem (1989-1999).

Although there have been promises to get the trains running again, in the Chaco villages of Salta today there are only a few memories of the railway: overgrown tracks and rundown brick railway stations that for years have housed homeless families.

Soraire, who raises cows, pigs and goats, is part of one of six teams – three criollo and three indigenous – that the Foundation for Development in Peace and Justice (Fundapaz) trained to build rainwater tanks in the area around Los Blancos.

“Everyone here wants their own tank,” Enzo Romero, a technician with Fundapaz, a non-governmental organisation that has been working for more than 40 years in rural development in indigenous and criollo settlements of Argentina’s Chaco region, told IPS in Los Blancos. “So we carry out surveys to see which families have the greatest needs.”

The director of Fundapaz, Gabriel Seghezzo, explains that “the beneficiary family must dig a hole 1.20 metres deep by five in diameter, in which the tank is buried. In addition, they have to provide lodging and meals to the builders during the week it takes to build it.”

“It’s very important for the family to work hard for this. In order for this to work out well, it is essential for the beneficiaries to feel they are involved,” Seghezzo told IPS in Salta, the provincial capital.

Fundapaz “imported” the rainwater tank system from Brazil, thanks to its many contacts with social organisations in that country, especially groups working for solutions to the chronic drought in the Northeast region. 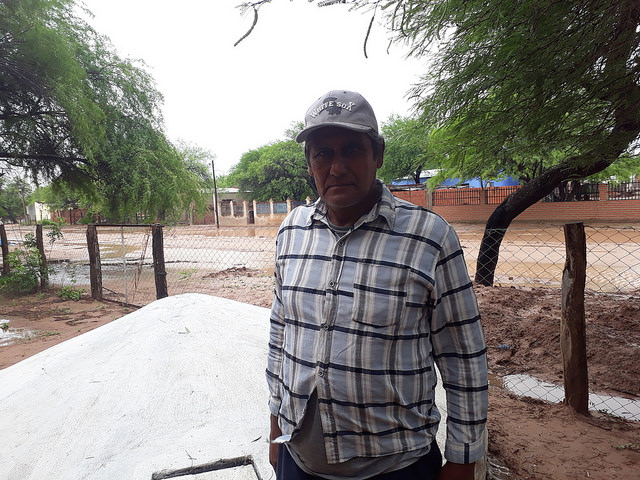 Antolín Soraire, a “criollo” farmer from the Chaco region of Salta, stands in front of one of the tanks he built in Los Blancos to collect rainwater, which provides families with drinking water for their needs during the six-month dry season in northern Argentina. Credit: Daniel Gutman/IPS

Romero points out that so far some 40 rooftops and water tanks have been built – at a cost of about 1,000 dollars each – in the municipality of Rivadavia Banda Norte, which is 12,000 square kilometres in size and has some 10,000 inhabitants. This number of tanks is, of course, a very small part of what is needed, he added.

“I wish the entire Chaco region could be sown with water tanks and we wouldn’t have to cry about the lack of water anymore. We don’t want 500-meter deep wells or other large projects. We trust local solutions,” says Romero, who studied environmental engineering at the National University of Salta and moved several years ago to Morillo, the capital of the municipality, 1,600 kilometres north of Buenos Aires.

On National Route 81, the only paved road in the area, it is advisable to travel slowly: as there are no fences, pigs, goats, chickens and other animals raised by indigenous and criollo families constantly wander across the road.

Near the road, in the mountains, live indigenous communities, such as those known as Lote 6 and Lote 8, which occupy former public land now recognised as belonging to members of the Wichí ethnic group, one of the largest native communities in Argentina, made up of around 51,000 people, according to official figures that are considered an under-registration.

In Lote 6, Dorita, a mother of seven, lives with her husband Mariano Barraza in a brick house with a tin roof, surrounded by free-ranging goats and chickens. The children and their families return seasonally from Los Blancos, where the grandchildren go to school, which like transportation is not available in the community. 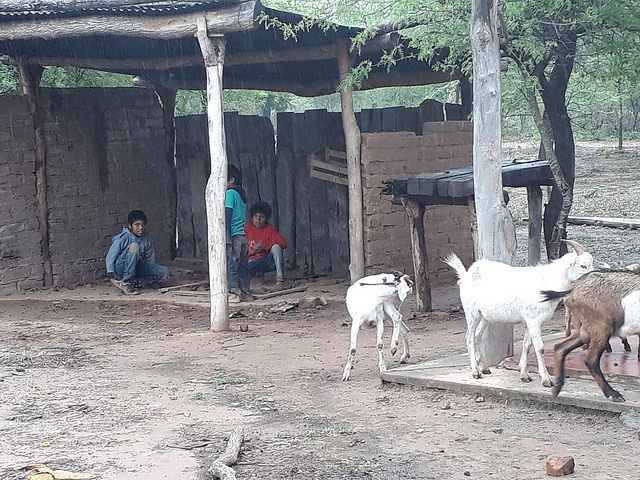 Three children play under a roof next to goats in Lote 6, an indigenous community in the province of Salta in northern Argentina. It is one of the poorest areas in the country, with half of the population having unmet basic needs, and where the shortage of drinking water is the most serious problem. Credit: Daniel Gutman/IPS

About 100 metres from the house, Dorita, who preferred not to give her last name, shows IPS a small pond with greenish water. In the region of Salta families dig these “represas” to store rainwater.

The families of Lot 6 today have a rooftop that collects rainwater and storage tank, but they used to use water from the “represas” – the same water that the animals drank, and often soiled.

“The kids get sick. But the families often consume the contaminated water from the ‘represas’ because they have no alternative,” Silvia Reynoso, a Catholic nun who works for Fundapaz in the area, told IPS.

In neighboring Lote 8, Anacleto Montes, a Wichi indigenous man who has an 80-square-metre rooftop that collects rainwater, explains: “This was a solution. Because we ask the municipality to bring us water, but there are times when the truck is not available and the water doesn’t arrive.”

What Montes doesn’t say is that water in the Chaco has also been used to buy political support in a patronage-based system.

Lalo Bertea, who heads the Tepeyac Foundation, an organisation linked to the Catholic Church that has been working in the area for 20 years, told IPS: “Usually in times of drought, the municipality distributes water. And it chooses where to bring water based on political reasons. The people in the area are so used to this that they consider it normal.”

“Water scarcity is the most serious social problem in this part of the Chaco,” says Bertea, who maintains that rainwater collection also has its limits and is experimenting with the purchase of Mexican pumps to extract groundwater when it can be found at a reasonable depth.

“The incredible thing about all this is that the Chaco is not the Sahara desert. There is water, but the big question is how to access it,” he says.