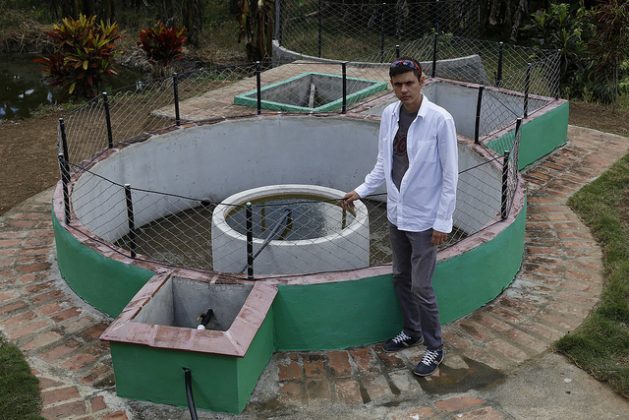 Alexander López Savrán, a 32-year-old engineer who innovated the standard fixed-dome biodigester to make it possible to create distribution networks from materials readily available in Cuba, stands next to one of these systems in the rural town of La Macuca, in Cabaiguán, Cuba. Credit: Jorge Luis Baños/IPS

HAVANA, Jan 8 2019 (IPS) - Black plastic pipes, readily available on the mainly empty shelves of Cuba’s shops, distribute biogas to homes in the rural town of La Macuca, buried under the ground or running through the grass and stones in people’s yards.

The strong blue flame in the kitchens of the eight homes supplied by producer Yuniel Pons is thanks to engineer Alexander López Savran, who innovated the standard fixed-dome biodigester to create distribution networks with the few basic materials available in this Caribbean island nation.

“A new biodigester has been designed to obtain pressure, which means that biogas can be distributed more than five kilometers away without the need for a compressor or blower. That is where the innovation lies,” the engineer, who lives in the city of Cabaiguán, capital of the municipality of the same name, where La Macuca is located, in the central province of Santi Spíritus, told IPS.

"Three years ago I had a big mess with animal waste, until I sought advice and began to make biogas…We are working on expanding the corrals so that another biodigester can benefit 15 more families, who have already been selected.” -- Yuniel Pons

López, 32, made headlines in 2017 when he received the Green Latin America Award in Ecuador, and the Massachusetts Institute of Technology included him among the 35 young Latin Americans whose innovations improved the lives of their communities.

With a long-standing movement of biogas promoters and current regulations for private pork production favorable to its expansion, Cuba faces the challenge of creating efficient distribution networks to further exploit this ecological resource and raise the quality of life of rural localities, amidst an anemic economy.

“We started by taking a close look at the problem,” López recalled. “We had pork-raising centers that needed biodigesters, but the volume they were going to produce would be much greater than the consumption of those state facilities. On the other hand, we didn’t have the equipment to be able to distribute it.”

This fuel arises from the decomposition of organic matter, especially cattle manure and human feces. But on many farms with biodigesters there is a surplus of methane gas which, if not used, puts pressure on the equipment and is often released into the atmosphere, contributing to pollution.

In addition, biogas is most efficient for cooking because up to 70 percent of the energy is lost when it is used to generate electricity or fuel a vehicle.

“Two factors were considered: we had too much energy and there are difficulties in cooking food in the communities due to deficits in access to energy or electricity costs,” López said, referring to the dependence of most Cuban households on electric appliances.

After two years of study and design, López came up with the first prototype, which over time “has changed structurally to gain in efficiency, durability and performance,” he said, when interviewed by IPS in Pons’ home, where Pons lives with his wife Sandra Díaz and their son. Sandra Díaz regulates the flame in her kitchen, which uses biogas from the innovative biodigester installed on her family’s land, in La Macuca, Cabaiguán, in the province of Santi Spíritus, in central Cuba. Credit: Jorge Luis Baños/IPS

Most of the biodigesters designed by López have been built as part of the Biomás Cuba project, which is coordinated by the state-run Indio Hatuey Experimental Pasture and Forage Station, located in the province of Matanzas, with support from the Swiss Agency for Development and Cooperation.

This initiative, which seeks to bring about energy sustainability in the Cuban countryside, provides part of the inputs, while the producer provides another part, to build the biodigester, which with fixed-dome technology is expensive because it requires a large volume of building materials but is compensated with distribution and 40 years of durability.

So far, 10 biodigesters have been built with this local innovation in four localities of Cabaiguán: El Colorado (two), Ojo de Agua (one), Juan González (six) and La Macuca (one), which supply 102 homes and improved the lives of 600 people, saving 65 percent of electricity consumption per household.

And the technology was also replicated in Matanzas, although the engineer lamented the lukewarm reception by decision-makers with respect to the biodigester, which could contribute to the national plan for renewable energies to provide 24 percent of electric power by 2030, compared to just four percent today.

In well-equipped corrals, Pons keeps between 100 and 150 pigs behind his house as part of an agreement between state companies and private producers that in 2017 produced a record 194,976 tons, which did not, however, meet the demand of the country’s 11.2 million inhabitants. And that total was apparently not surpassed in 2018.

“Three years ago I had a big mess with animal waste, until I sought advice and began to make biogas,” recalled the producer, who is supported by Biomás. “We are working on expanding the corrals so that another biodigester can benefit 15 more families, who have already been selected.” Farmer Yuniel Pons and his wife Sandra Díaz stand next to the biodigester installed by their house, which with its innovative system supplies energy to the kitchens of eight homes in La Macuca, a rural settlement in the municipality of Cabaiguán, in central Cuba. Credit: Jorge Luis Baños/IPS

After lighting the gas stove in his kitchen, Diaz, a homemaker, explained that “cooking food like this is faster, it’s wonderful… I used to cook with an electric hotplate and pressure cooker, but they were almost always broken,” she said.

The network reaches the modest home of Denia Santos and her family, who live next door to Pons. “Now I cook with biogas and I also use it to boil (disinfect) towels and bedding, something I did with firewood that I would chop up myself,” said Santos, who takes care of her mentally disabled son.

Other benefits described by families who have biogas are that it is a better way to cook food for their animals and boil water for human consumption, and that it generates a strongersense of community as everyone is responsible for maintaining the biodigester.

José Antonio Guardado, national coordinator of the Movement of Biogas Users, which emerged in 1983 and today has more than 3,000 members spread throughout almost all of Cuba’s provinces, said he was happy with the trend in Cuban agriculture to create solidarity biogas networks.

Guardado told IPS that there is “greater awareness, political support and participative activities in the context of local development,” although obstacles to distribution persist because “materials in the market are not optimal, sufficient or affordable” and “there is a lack of institutional infrastructure to provide this service in an integrated manner.”

Meanwhile, in El Cano, outside of Havana, the solidarity plans of farmer Hortensia Martínez have come to a halt despite the fact that she used her own resources to build a biodigester with a traditional fixed 22-cubic-meter dome on her La China farm, to supply the farm itself and share with five neighboring homes.

“Now I plan to give it a boost, but we haven’t been able to implement it because we don’t have the connections to the community’s houses and it has valves, special faucets and a type of hose that makes it possible to bury the network underground,” the farmer, who is well-known for her community projects, especially targeting children, told IPS.