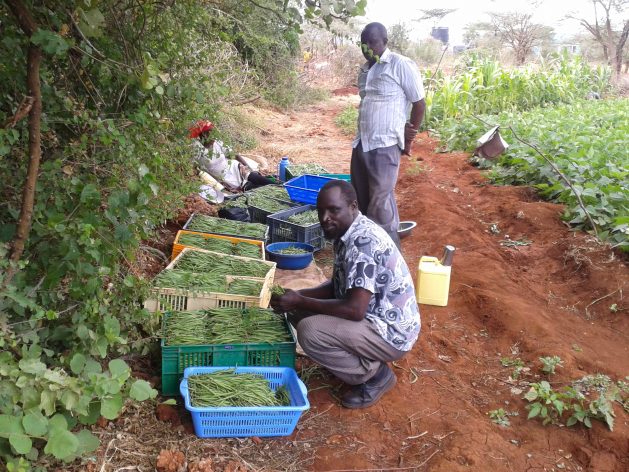 Smallholder farmers in Isiolo, Kenya sorting beans before sending them to the market in Nairobi. the latest Africa Agriculture Status Report (AASR) shows that small- and medium-sized enterprises (SMEs) are the main drivers of food economy on the African continent. Credit: Isaiah Esipisu/IPS

ACCRA, Ghana/ELDORET TOWN, Kenya, Sep 4 2019 (IPS) - Viola Kiptanui, a resident of Langas estate in the outskirts of Kenya’s Eldoret town, has discovered a new way of life – eating only what she knows the source – thanks to a new smallholder entrepreneurship venture.

“Given the many health problems that have emerged, there is need for one to know exactly what they are feeding their families,” said Kiptanui a mother of three children.

Within the Langas shopping centre, residents stream to a newly-established grocery called ‘iAgribizAfrica’ to buy fresh green vegetables and fruits that are grown by Uasin Gishu County’s smallholder farmers and sold directly to the grocery.

The report, released on Sept. 3 on the sidelines of the Africa Green Revolution Forum (AGRF) in Accra, Ghana shows that entrepreneurs from small- and medium-sized enterprises (SMEs) are the main drivers of the food economy on the African continent.

According to the 220-page document compiled by the Alliance for a Green Revolution in Africa (AGRA), 64 percent of total food consumed on the continent is sourced from SMEs, with only 16 percent coming from larger enterprises, and the remaining 20 percent being grown and eaten by farming households.

“There has been a ‘Quiet Revolution’ in agrifood private sector value chains linking small farmers to burgeoning urban markets and growing towns in Africa. This has spurred farmers’ participation in food and farm input markets,” said Reardon during a media briefing prior to the launch of the report.

These SMEs, often women-led, include food processors, wholesalers, and retailers, and they provide a range of services, from transport and logistics to the sale of inputs such as fertilisers and seed to farmers – says the report.

According to Rodgers Kirwa, a 27-year-old farmer and founder of iAgribizAfrica, there is a growing demand for food whose origin can be traced.

“I started this business in 2018 and so far, I have 40 smallholder farmers within my network,” he told IPS at the AGRF in Ghana.

The 40 farmers were all recruited and registered by the young entrepreneur, and at some point supported for farm inputs on credit in case of a pressing need.

“The idea is to have farmers we know very well, so that we can monitor what they are growing, advice them on farm inputs, and monitor how they are using them for the safety of our customers,” said Kirwa.

Besides the entrepreneurship, Kirwa is a member of another online platform known as ‘Mkulima Young’ (young farmer) which was started with 10 partners, among them three young agronomists, two marketers, and social media enthusiasts. The platform now has 30,000 subscribers from Kenya and Uganda, mostly seeking information about farming enterprises. It is from this platform that farmers get answers to all their questions.

“SMEs are the biggest investors in building markets for farmers in Africa today, and will likely remain so for the next 10 to 20 years,” said Dr. Agnes Kalibata, President of AGRA in a statement. “They are not a ‘missing middle,’ as is thought, but the ‘hidden middle,’ ready for support and investment to thrive further. Today, we bring them out into the light.”

“We live in a global market,” Kalibata said. “Our job today is to ensure that these SMEs are grounded enough to provide the right kind of support to family farms; and to be competitive so that they can survive and thrive in an increasingly interconnected and global market,” she said noting that the smallholder entrepreneurs’ success will determine the future of agriculture and food security on the African continent.

However, according to Reardon, there are challenges. “The journey has taken off, but not flying in its full potential,” said the lead researcher. “We need sound policies that will support these SMEs, good infrastructure and capacity building for them,” he said.

So far, governments that have invested in this have already registered a positive impact.

In Ghana, for example, the government has subsidised the cost of fertilisers by 50 percent, an intervention programme that has been in place since 2008 when the country ran into a food crisis due to poor yields, according to Dr. Owusu Afriyie Akoto, the country’s Minister of Food and Agriculture. “This has been a huge success, and farmers have more than enough produce from their farms at the moment,” he told journalists at the AGRF.

According to Vanessa Adams, Vice President of Country Support and Delivery at AGRA, there is need to use appropriate technologies and available food systems to ensure that what is produced is sold at the right time.

“Bumper harvests are fantastic, but not after market crushes,” she said.