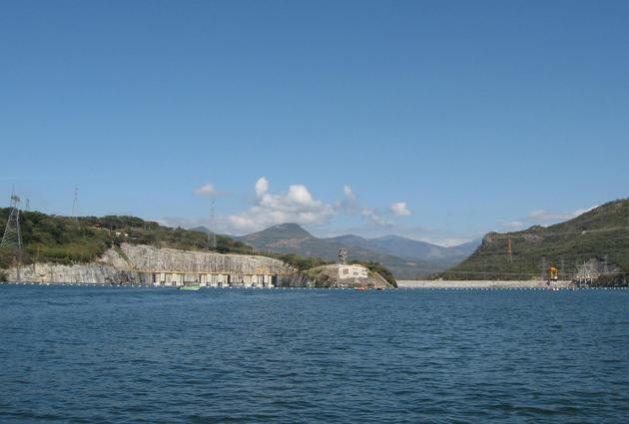 Mexico is making progress on a project to modernise dams and other hydroelectric plant infrastructure and equipment, in order to increase generation, although this plan faces threats of drought and questions about profitability compared to other renewable sources. The photo shows the reservoir and dam at the Chicoasén power plant in Chiapas, included in the plan. Photo: Wikimedia

MEXICO CITY, Mar 30 2020 (IPS) - Water security and profitability are the Achilles heels of the plan to modernise 60 hydroelectric plants in Mexico, drawn up by the administration of President Andrés Manuel López Obrador.

Most of them are power plants built more than 50 years ago, so the upgrading plan poses technical and feasibility challenges. López Obrador has insisted on maintaining the hydropower plants, as they are part of Mexico’s heritage, under the control of the state-owned Federal Electricity Commission (CFE).

“Modernising and maintaining hydroelectric plants is a good idea. There are some plants that can withstand upgrading and will become more efficient in terms of water use and production,” the activist told IPS in the Mexican capital.

But she warned of the need for “good basic water planning” that takes into account climate factors, in order to assess whether it is worthwhile refurbishing some of the plants.

Data from the CFE obtained by IPS indicate that the public company has evaluated the expansion and profitability analysis of 21 dams, as part of the project aimed at rehabilitating or modernising hydropower plants.

Upgrading infrastructure and equipment would boost the generating power of 18 of these 21 plants.

The CFE analysed hydrometric data and produced a hydrological and hydro-energy study, an economic evaluation, and an analysis of profitability and social and environmental feasibility, in order to evaluate the situation of each plant.

Using these analyses, the CFE calculated the suggested megawatts (MW) and type of turbine to be installed, the result of the annual generation, the percentage obtained with the current conditions of the plants, the levelised cost of the electricity, the cost/benefit ratio of the plants and their profitability.

In this Latin American nation of 130 million people, there are some 4,900 public and private dams and reservoirs used for electricity, irrigation and fishing, among other uses, according to the government’s National Institute of Electricity and Clean Energy.

Of these, at least 101 generate electricity, with an average age of 47 years and an average capacity of 147 MW. Mexico’s Federal Electricity Commission (CFE) is continuing to build new hydroelectric plants, such as the one in Zapotillo, in the western state of Jalisco. In addition to the new plants, 60 older dams, included in a government modernisation plan, will produce more electricity. Photo: Courtesy of EJ Atlas

It is also studying the relaunch of the Las Rosas power plant in the central state of Querétaro, which was built in 1949 and is completely inoperative.

In the view of Daniel Chacón, energy director of the non-governmental Mexican Climate Initiative, the refurbishing of hydropower plants is highly beneficial.

“It’s one of our pending tasks. You have to take into account that the reservoirs gradually fill up with sediment and shrink in size over the years. A selection should be made as to which dams are worth investing in, depending on their age and on how much their capacity has declined,” he told IPS.

Chacón pointed out that productivity depends on the rainfall regime, the end use of the water, and the level of sedimentation of the reservoir and how clogged up the pipes are.

In its 2020 budget, the CFE allocated at least 116 million dollars for the replacement of machinery and the rehabilitation of hydroelectric plants under its control.

In December 2018, when he began his six-year term, López Obrador announced an agreement with the Canadian public company Hydro-Québec to modernise 60 plants.

The effects of drought on the reservoirs

But Mexico’s hydroelectric system faces the threat of drought, one of the consequences of the climate crisis unleashed by the extraction and burning of fossil fuels and to which Mexico is highly vulnerable, as the world’s 12th largest producer of hydrocarbons.

The 210 biggest reservoirs in the country can hold up to 84,500 cubic hectometres (hm3, millions of metres), compared to a maximum ordinary water level of 12,500 hm3, according to data from the government’s National Water Commission (Conagua).

Conagua’s latest report on the subject stated that on Mar. 16, five reservoirs were full to capacity, 76 were between 75 and 100 percent in volume, 68 were between 50 and 75 percent, and 22 were less than 50 percent. At least five of Mexico’s 32 states report critically low water levels in their reservoirs.

In February, Conagua transferred 100 million cubic metres of water from a dam in the northern state of Nuevo León to another reservoir in neighbouring Tamaulipas state because of the drought.

Several strips of Mexico’s Atlantic coast are suffering from severe and extreme drought, according to the National Drought Monitor.

Despite the progress made in expanding the use of renewable energies, Mexico’s energy mix remains heavily dependent on fossil fuels. In the first quarter of 2019, gross generation totaled 80,225 gigawatt-hours (Gwh), up from 78,167 in the same period last year.

Since the start of his term, López Obrador has opted to fortify the state monopolies of the CFE and the Petroleos Mexicanos (Pemex) oil company, thus favouring fossil fuels over renewables. And he has stated that he will not shut down power plants.

He cancelled the call for auctions of long-term contracts for electricity supply that allowed private companies to build wind and solar power plants and sell the energy to the CFE for 15 to 20 years.

But hydroelectricity cannot compete economically with wind and solar power, although it can serve as a back-up during peak consumption hours and reservoirs can serve as storage during critical periods.

The 2015 Energy Transition Law stipulates that clean energy must account for 25 percent of the electricity generated by 2018, 30 percent by 2021 and 35 percent by 2024. Counting hydropower and nuclear energy, the country has no problem reaching these goals.

With respect to the plan for modernising hydropower plants, Puentes and Chacón warned of the risk posed by drought.

“We should not depend on, or increase our dependence on, hydroelectric plants. The essential life span of these plants must be reassessed. We have not seen a plan to dismantle others either, which is what countries like the United States are doing. Dams that don’t generate electricity can serve as regulators and prevent floods and droughts,” Puentes said.

For his part, Chacón said that during times of drought, the water from the reservoirs goes to agricultural producers and cannot be used to generate electricity.

“We need to look at other renewable energies, like solar and wind. With more efficient turbines and generators, hydroelectric generation can become more efficient. The plants and reservoirs can be used for backup and energy storage. In Mexico that will become unavoidable at some point,” he said.

Prodesen, which is not considering shutting down plants, projects that Mexico will need 66,912 additional MW to meet electricity demand in the period 2018-2032, which implies an investment of 68 billion dollars over the next 15 years.

In that period, the additional hydroelectric capacity planned is three percent, or 2,213 MW. By 2022, hydropower is to represent 13 percent of the national total and in 2032, 11 percent.

In the Aztec worldview, Tlaloc was the god of rain and the one they worshipped to thank for rainfall. Perhaps their descendants will have to pray to him again to fill the reservoirs.