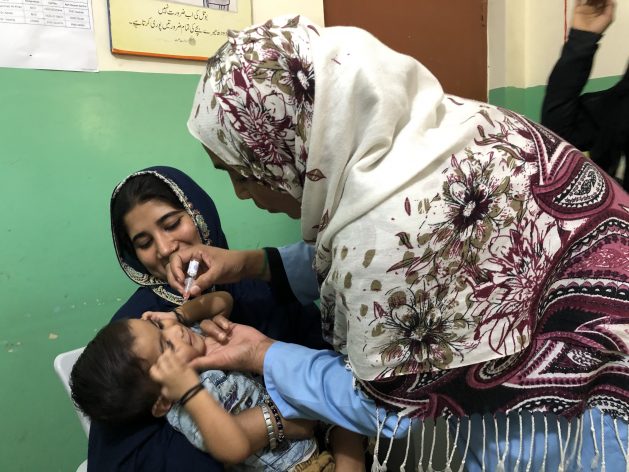 A polio vaccinator administers the oral polio vaccine to a child in Pakistan. The country remains one of three in the world where polio is yet to be eradicated. Credit: Zofeen T. Ebrahim/IPS

KARACHI, Pakistan, Mar 11 2020 (IPS) - Dr. Rana Muhammad Safdar, the coordinator for Pakistan’s National Emergency Operations Centre for Polio Eradication, has sleepless nights thinking about what needs to be done for his country to eradicate polio.

“Not only me but the entire team is having sleepless nights thinking how best and how quickly we can reach the finish line,” he told IPS. “It’s always painful to hear a child getting paralysed for life from a vaccine-preventable disease.”

Last month, over 39 million children under the age of five were vaccinated across Pakistan. And a little more than 180,000 children were missed because their parents refused to have them vaccinated. While the number of missed children is marginal in comparison to those who were vaccinated, it has caused concern.

“The proportion of children missed in the last two campaigns due to refusals is very small (0.5 percent) but where clustered these can still provide the virus with the opportunity to survive longer and re-infect areas that we clean through so much hard work,” Safdar lamented.

The Pakistan Polio Eradication Programme began 26 years ago with the “largest surveillance network” in the world — an army of 260,000 polio vaccinators going door to door to administer oral polio vaccine (OPV) to children under five. Yet the country is only one of three in the world, along with Afghanistan and Nigeria (Nigeria has not reported any wild polio virus cases for a year, however there have been cases of vaccine-derived poliovirus in the West African nation), that has not eradicated the virus.

Last year, for the first time, Pakistan reported 25 positive Wild Poliovirus 1 (WPV1) cases across the country. Since the start of the year 23 new cases have been reported, with more expected to be recorded later this year.

The issue is so sensitive that every small gain by anti-vaccine groups takes the vaccination campaign two giant steps back. A video shared on Twitter last year, claiming that polio drops had some toxic ingredient making children sick, went viral and led to a round of refusals for months afterwards.

The reason for refusals include the same misconceptions that vaccination teams have been facing the past several years and include unfounded beliefs that; the programme is a western-funded campaign with some hidden agenda, polio drops are given to Muslim children to cause infertility and to stem the population of the Muslim community, it has some ingredients that are forbidden for Muslims, and that it causes paralysis.

Abrar Khan, a 29-year-old teacher, contracted polio when was just three. He’s no public health specialist, but Khan has an encyclopedia of knowledge about the virus. Five years ago he was a polio ambassador with the government’s Polio Eradication Initiative.

And he still makes it a point to visit homes in his locality of Baldia Town, in Karachi’s District West, that are marked by polio workers with an “R” because the family refused to have their children vaccinated. “I tell them it is their right to refuse; I try and convince them but even if they say yes to me, I have no way of knowing if they got their child vaccinated,” he told IPS in a phone interview.

He said people were more concerned about the other more common diseases their children where battling with, as well as the failing healthcare system. “One way to win these people over would be to provide better quality healthcare,” said Khan.

Swaleha Ahmed*, who asked for her real name not to printed because she holds a senior position within the polio programme, told IPS that if the government were to provide for the needs of young children, including paying for their healthcare, education and basic needs, “all those parents who hide their kids when polio workers visit their homes will come forward and get their kids registered to avail this childcare fund”.

Ahmed, who has been with the programme for some 17 years, pointed out that because the campaign was so old, complacency has set in. And as parents continue to refuse to all their children to vaccinated, it was discovered that some vaccinators in Khyber Pakhtunkhwa (KP), where the virus originated and is circulating, were wrongly marking refusals as having been vaccinated.

“It happened in KP in the very remote areas where these workers have to walk miles in knee deep snow only to be told by families that they do not want their kids to be administered drops,” she said.

But the programme is trying to overcome this.

“We are telling polio workers that if they get refusals, it will not make a dent on their daily wages nor will they have to go again as someone else will be sent in their place if they face resistance,” said Ahmed. “They are also warned that if they are found to fake the process and mark the kids without first giving them drops, they can lose their jobs.”

But there is growing fatigue for this campaign from the side of parents as well. Nasik Abbas,who works as a supervisor in Tarnol, some 20 km from the federal capital, Islamabad, has been involved in the polio campaign for over 13 years. “Parents are now annoyed by the regular knocking at their door,” he told IPS.

Hifza Tahir, who works in Islamabad’s Bahria Town has been facing another dilemma. “They turn me away saying they will get their kids vaccinated from the hospital.”

Ahmed said the working hours and ways of working for polio vaccinators, some 62 percent of whom are women, needed to be reevaluated.

“We should not bind these workers by time and attendance. We are dealing with kids and their parents. So we should give the workers flexi times in which they must cover the required number of homes,” said Ahmed. In some cases, she said, it would make more sense to visit the house later in the day when the decision maker, usually a father, was home from work, or early morning before the kids went to school.

Ahmed, however, admitted that despite the challenges the polio programme has come a long way. “Today, the polio workers are better trained to deal with parents, have an ID card to prove their identity, are provided security and everything is documented,” she said.

The campaigns will continue with another round of special vaccination in high risk districts this month followed by a nationwide campaign in mid-April, said Safdar.

“Our efforts from December 2019 till April 2020 will push the virus back to 2017-18 levels and from thereon we will further push it towards zero polio by focusing on routine immunisation, improving basic health services, malnutrition as well as ensuring safe water and sanitation,” he said.