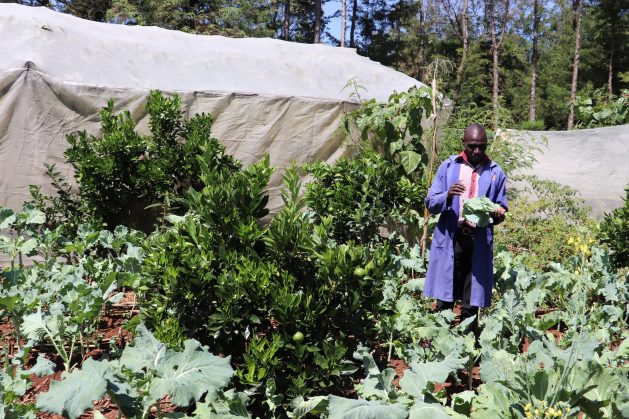 Samson Tanui, from Kenya’s Eldoret town in the Rift Valley region, is practising agroecology and his permaculture unit has become the centre of attraction for farmers from near and afar amid food shortages during the current COVID-19 pandemic. Credit: Isaiah Esipisu/IPS

NAIROBI, Jun 15 2020 (IPS) - With just a quarter of an acre of land in Kesses near Kenya’s Eldoret town in the Rift Valley region, Samson Tanui is practising agroecology and his permaculture unit has become the centre of attraction for farmers from near and afar amid food shortages during the current COVID-19 pandemic.

“Many people are impressed that even with the markets being closed to enable social distancing and the containment of COVID-19, my household had sufficient food and even more to sell to neighbours,” the 45-year-old farmer and a father of two told IPS.

On his plot, he grows different types of vegetables including kales, amaranth, vine spinach, ordinary spinach, tomatoes, capsicum, chilli and African nightshade. For the food crops, he grows maize, arrow roots and sweet potatoes in a homemade greenhouse. He also keeps chicken, has beehives for honey, rabbits, dairy goats, a dairy cow and pigeons.

As a result, Tanui’s household has been food secure since 2017 despite the small piece of land on which he farms. He’s also become an inspiration to several farmers who come every Saturday to learn about permaculture.

Tanui’s methods of agriculture are proven to be sustainable. In fact, the Food Sustainability Index, created by the Barilla Centre for Food and Nutrition (BCFN) and the Economist Intelligence Unit (EIU), recognises that agroecology “taps into traditional agricultural knowledge and practices, plays an important role in sustainable farming by harnessing local ecosystems”.

“Tapping into local ecosystems, for example via using biomass and biodiversity, the traditional farming practices that make up agroecology can improve soil quality and achieve food yields that provide balanced nutrition and increase fair trade,” the Food Sustainability Index notes.

However, a new study by researchers from Biovision, International Panel of Experts on Sustainable Food Systems (IPES-Food) and the United Kingdom-based Institute of Development Studies shows that such sustainable and regenerative farming techniques have either been neglected, ignored or disregarded by major donors.

The study titled ‘Money Flows: what is holding back investment in agroecological research for Africa?’ released on Jun. 10 focused mainly on; the Bill & Melinda Gates Foundation, because it is the biggest philanthropic investor in agri-development; on Switzerland, a major bilateral donor; and Kenya, one of Africa’s leading recipients and implementers of agricultural research for development.

One of the major findings, according to Hans Herren, the President for Biovision, is that most governments, both in developing and developed countries, still favour “green revolution” approaches, with the belief that chemical-intensive, large-scale industrial agriculture is the only way to produce sufficient food.

“These approaches have failed,” said Herren, winner of the 1995 World Food Prize and 2013 Right Livelihood Award. “They have failed ecosystems, farming communities, and an entire continent,” he said in a statement to the press.

Herren added, “With the compound challenges of climate change, pressure on land and water, food-induced health problems and pandemics such as COVID-19, we need change now. And this starts with money flowing into agroecology.”

However, Dr Lusike Wasilwa, a senior research scientist at the Kenya Agricultural and Livestock Research Organisation (KALRO), believes that donors are investing more money in industrial agriculture not because it is the magic bullet for Kenya and other African countries, but because they have an agenda.

“Kenya needs to wake up and find its position in production of crops such as avocado and macadamia nuts, which are largely grown using sustainable and largely environment-friendly methods,” Wasilwa, who is also the director of Crops Systems at KALRO, told IPS. “No donor is willing to support such crops that could easily make Africa rich,” she said.

So far, Kenya is the number one country in avocado production in Africa and fourth in the world. It is also third in the world for macadamia nut production.

“We should not let donors set our research agenda because they are not going to fund research that [will help Africa] make money,” the scientist told IPS in an interview. She challenged the government to honour the Malabo declaration and invest at least 10 percent of the GDP in agriculture instead of waiting on donors for finance.

According to the new report, just like the case of Tanui in Eldoret, agroecology has the potential to build resilience and sustainability at all levels, by reducing vulnerability to future supply shocks and trade disruptions, reconnecting people with local food production, and making fresh, nutritious food accessible and affordable to all.

This, according to the scientists, will reduce the diet-related health conditions that make people susceptible to diseases, and provide fair wages and secure conditions to food and farm workers, thereby reducing their vulnerability to economic shocks and their risks of contracting and spreading illnesses.

However, the findings show that very little agricultural research funding in Africa is being used to transform such food and farming systems.

The scientists found that only 3 percent of Gates Foundation projects in Africa support sustainable, regenerative approaches or agroecology.

Nonetheless, the report points out that support for agroecology is now growing across the agri-development community, particularly in light of climate change. But this hasn’t yet translated into a meaningful shift in funding flows.

“We need to change funding flows and unequal power relations. It’s clear that in Africa as elsewhere, vested interests are propping up agricultural practices based on an obsession with technological fixes that is damaging soils and livelihoods, and creating a dependency on the world’s biggest agri-businesses. Agroecology offers a way out of that vicious cycle,” Olivia Yambi, co-chair of IPES-Food said in a statement.

According to KALRO’s Wasilwa, Africa has huge population that can potentially provide manpower, sufficient land, good soil, and the sun, “but the only problem is that we do not support what is the best for the continent”.