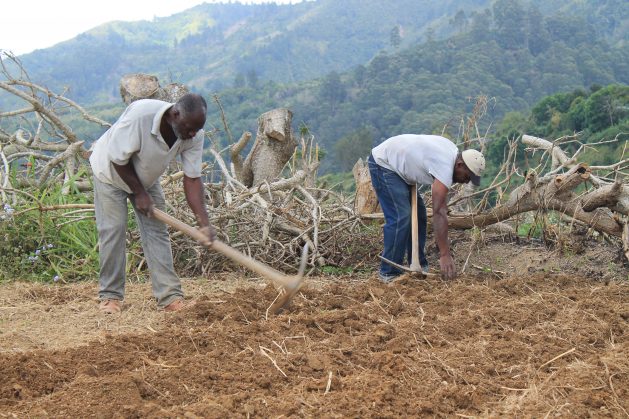 Kingston, Sep 9 2021 (IPS) - Less than halfway into the 2021 Atlantic Hurricane Season, Jamaica and its Caribbean neighbours were already tallying the costs of infrastructural damage and crop losses from the passage of three tropical storms – Elsa, Grace and Ida. And after a record-breaking 2020 season, the region is on tenterhooks as the season peaks.

But while storm and hurricane damage are not new to the Caribbean, these systems’ increased frequency and intensity bring new reckoning for a region where climate change is already happening. According to data, the effects are likely to worsen in the next 20 years or so, earlier than previously expected.

What is more, the launch of the Intergovernmental Panel on Climate Change (IPCC) Assessment Report (AR6) confirmed what regional scientists have said for years: the frequency and intensity of hurricanes will increase, and floods, droughts and dry spells will be more prolonged and more frequent. In addition, sea levels are rising faster, and heatwaves are more intense and are occurring more often.

AR6, the so-called ‘red code for humanity’, offers a frightening look at the global climate and what is to come. It also confirmed that for most small island states, climate change is already happening.

In a bid to bring home the reality of what is fast becoming the region’s biggest challenge, two leading climate scientists broke down AR6 to highlight the issues that should concern leaders and citizens of the Caribbean.

In a document named Caribbean Under Threat! 10 Urgent Takeaways for the Caribbean, co-heads of the University of the West Indies Mona, Climate Studies Group (CSG), professors Tannecia Stephenson and Michael Taylor warned: “We can now say with greater certainty that climate change is making our weather worse. It is affecting the intensity of heatwaves, droughts, floods and hurricanes, all of which are impacting the Caribbean”.

In a joint interview with IPS, Taylor and Stephenson noted, “Global warming has not slowed.”

They reiterated the IPCC’s warning that “The world will exceed 1.5 degrees between now and 2040” and urged Caribbean leaders to collectively lobby for deeper global greenhouse gas reductions at the upcoming 26th Conference of the Parties (COP26) of the UN Convention on Climate Change. The gathering of world leaders and negotiators will be held in Glasgow, Scotland, from October 31 to November 12, 2021.

While AR6 offered some hope, in that there is still time to limit global heating to between 1.5 and 2.0 degrees of pre-industrial limits, Stephenson noted that there is an urgent need for more drastic cuts in emissions.

That will not be easy, Taylor added, because although the Caribbean’s contribution to global C02 emissions is already low – according to some estimates below two per cent. “The region must drastically reduce its footprint even further, through greater use of renewables, the preservation of marine and land-based forests and by reducing emissions from waste and transportation.”

The takeaway for the Caribbean, Stephenson said, is that the region will face multiple concurrent threats with every additional incremental increase in temperature. Atmospheric warming and more acidic seas and oceans will impact tourism and fisheries and the future of the region’s Blue Economic thrust.

She added: “The Caribbean must prepare itself to deal with water shortages and increasing sea levels which has implication for low lying areas and the many small islands of the region”.

The 20-country grouping of the Caribbean Community has rallied around the slogan ‘1.5 to stay Alive’ based on the premise that viability of the territories here, is dependent on global temperatures remaining below or at 1.5 degrees above pre-industrial levels. But with global temperatures already at 1.1 of the 1.5 degrees, warming is outstripping the pace of the region’s response.

“If there ever was a time to step up the global campaign for 1.5 degrees, it is now,” said Stephenson, the region’s only contributing writer in Working Group 1, of the AR6.

According to the IPCC AR6 report, net-zero carbon dioxide emissions by mid-century can limit global warming to 1.5 or 2.0 degrees within this century. However, the Climate Studies Group has warned that some individual years will hit 1.5 degrees even before 2040, when temperatures are expected to exceed that target.

The signs are everywhere. Last summer, the CSG reported an increase in the number of hot days and nights in the Caribbean. Forecasts also indicate that in the next ten years, the day and night-time temperatures in the region will increase by between 0.65 and 0.84 degrees.

At the same time, the CSG forecasted a 20 per cent reduction in rainfall in some places and up to 30 per cent in others. Trends are also reflecting an increase in the number of dry spells and droughts. Between 2013 and 2017, droughts have swept the Caribbean from Cuba in the North to Trinidad and Tobago in the South, and Belize, Guyana and Suriname in Central and South America.

Since AR5 in 2014, the abundance of evidence links the catastrophic changes to humans, the scientist noted, adding that the changes from human-induced climate change are visible in the extremes of heatwaves, heavy rainfall, droughts, and tropical cyclones. This past summer, wildfires and extreme rainfall caused deaths and forced evacuations in every region of the world, and a cold snap covered Brazil in snowfall and freezing rain.
These intensity and frequency of heat extremes are quickly becoming a cause for concern for the region as the extremes are likely to impact energy use, agricultural productivity, health and water demand and availability. Stephenson urged leaders to make water security a top priority in their mitigation planning.

Three of the world’s most water-scarce countries are in the Caribbean. Water scarce is the term given when a country has less than 1,000 cubic meters of freshwater resources per resident.

The region has a role in deciding how bad things will become, Taylor and Stephenson said. In their 10-point takeaway, they challenge leaders to intensify efforts to keep the current limits on global warming. They must have collective positions on mitigation, adaptation and loss and damage even as the world has already committed itself to some level of increase and impact.

In the run-up to COP26, regional leaders are not only continuing their support for 1.5, but they have also positioned themselves behind the Five Point Plan for Solidarity, Fairness and Prosperity, which calls for the delivery of the promises made in the Paris Agreement.

If nothing else, the region will continue to be severely impacted and must invest heavily to shore up critical infrastructure, most of which are along the coast, said veteran climate scientist Dr Ulric Trotz.

Using Jamaica as an example, he pointed to the US$65.7 million coastal protection works along a 2.5- kilometre stretch of the 14-kilometre-long Palisadoes peninsula in 2010 after the international airport was cut off from the capital city, Kingston, by back-to-back extreme weather events.

“The Caribbean must be prepared for the ‘new normal’ of climate intensities,” Stephenson said. “The stark message is that everybody has to be part of the solution”.

*The Climate Studies Group, Mona is a consortium member of The UWI’s Global Institute of Climate-Smart and Resilient Development (GICSRD), which harnesses UWI’s expertise in climate change, resilience, sustainable development and disaster risk reduction across all UWI campuses.