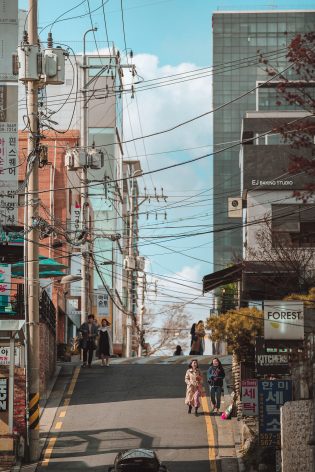 Korea is one of the world's top economies. Yet, behind the success, many feel alienated. Does the recent hit show Squid Game, reflect the underbelly of the society's success? Credit: Ori Song/Unsplash

Seoul, Nov 16 2021 (IPS) - Immediately after its release, the Squid Game went viral, grabbing the attention of the world’s entertainment stage. The grotesque and hyper-violent thriller has reportedly become Netflix’s biggest show, the world’s most-watched and the most-talked-about streaming entertainment. Is it a case of art imitating life?

The global rise of Korean entertainment is reminiscent of South Korea’s rags-to-rich story. The once war-stricken country with per-capita GDP of 67 US dollars after the 1950-53 Korean War has become one of the world’s top economies with a per-capita GDP of 32,860 US dollars in 2020.

South Koreans enjoy high-tech conveniences, and many of their enterprises are sought after internationally, including home electronics, vehicles and ships.

Despite the COVID-19 pandemic, success stories abound about its business, technology or entertainment industries.

K-pop BTS is now a global star who often tops the Billboard charts. A few years ago, it was unthinkable that Korean entertainment could surpass the content produced in the United States. 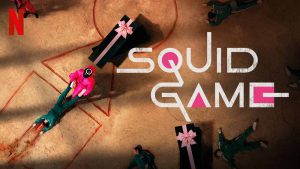 Squid Game has become a global success. Is it a case of art imitating life?

“The Squid Game has become a hope for our students to go to the global stage,” Kim Sang-Hoon, a professor at Cheju Halla University who teaches future talents video-making or filmmaking or broadcasting, told IPS.

However, the storyline suggests that success is not the only parameter with which to measure Korean society. Squid Game is a story of the “losers” who dropped out from the success story.

The hero, Gi-Hoon, was in debt after losing his job and squandering his money on a horse-racing game. He got divorced and missed his ten-year-old estranged daughter. Sang-Woo was once a brilliant stockbroker but went broke after gambling away his money.

The drama director Hwang Dong-Hyeok told local media: “In fact, I used to be one of the losers.”

He elaborated that “as a boy of a single-mother at the backstreet of Seoul, I used to be a boy at the back street spending almost the whole day playing the games (all of which) appear in the Squid Game”.

Although many more South Korean people live the “most affluent life” ever in the country’s history, many people feel like they are playing the squid game, where a few winners take all at the expense of many losers.

In the Squid Game, an elderly character Ilnam said to another character, Gi-Hoon, while playing marbles: “Cheating on others is OK, but being cheated, is not OK?”

This soundbite is one that many South Koreans identified with.

“I felt thrilled when I heard this because it sounds like our reality,” said Ko June-Ho, a South Korean fan and a university student told IPS. He added he identified with so much in the story. “When the elderly character Il-Nam met Ki-Hoon after the squid game, Il-Nam said: ‘Life here (outside the game) is more hellish (than the life I spent in the squid game)’.”

In the death game, the losers are separated from their family, friends and community. Like Sae-Byok, a North Korean woman defector struggles to rebuild her lost family connections but all in vain. Or, Ali, a worker from Pakistan, is in debt because his Korean employer didn’t pay him. Even the elderly character Il-Nam, the Squid Game host, is wealthy but misses his old family ties. He tells Gi-Hoon: “I used to live with my family”.

Some experts say that the squid game losers are like South Korean losers, who feel isolated from the glory story.

While technology businesses, like the online selling platform Coopang, have become successful during the COVID-19 pandemic, restaurant owners were forced to shut down because of regulations. The impact is clear.

“Since the start of the pandemic, people have become more and more worried about their jobs, they are seeing their incomes falling, and that is having an impact on their day-to-day lives.”

Asia Nikkei reported that a study by the Korea Economic Research Institute found that sales by independent merchants were down 78.5% in the first half of the year from the same period in 2020, with 58% of respondents attributing the decline to COVID.

“The cast and crews have done such an outstanding job. On top of that, the content of the series is just superb. It is thrilling, many scenes are gruesome, yet there is meaning in it.”

Another South Korean fan, Lee Ji-Hyeon, said: “The drama was like a puzzle game. I felt thrilled as I was putting the pieces of actors’ talk and each scene together so that I kept thinking about what it means and how it will be related to the next move.”

However, even in the extreme death game, the underlying warmth of the South Korean traditional culture is reflected.

The thriller’s punch line, with “Kkak-Ttu-gi” or “Kkan-Bu”, demonstrates Korean culture. The elderly Il-Nam says to Gi-Hoon: “Let’s make ‘Kkan-Bu” friendship between two of us.”

Kkan-Bu is a life-long friendship that lasts unchanged regardless of whether a person is a loser or a winner. Some characters made decisions that touched the heart of the fans.

Gi-Hoon did not give up their heart even in the live-or-die moment. Ji-Young gives up her life to let her game partner Sae-Byok can win the game. Even the hardened heart of the elderly Il-Nam softens as the senior and becomes friends with warm-hearted Gi-Hoon.

Another female character Mi-Nyo said: “They call me Kkak-Ttu-gi” In Korean children’s games.”

Kkak-Ttu-Gi shows how Korean culture values human connection. Even though the player is poor and cannot contribute, the team won’t kick them out.

There is irony in the money matters. Even though Gi-Hoon emerges as the winner of the game, grabbing $40 million, his life did not change. When he returns home after the game, he finds his mother dead. He remains a divorced, lonely man. Even though he has the prize in his bank account, he doesn’t spend it. Instead, he borrows Won10,000 from a banker and gives it to a street flower-selling woman.

“The drama makes me think about what matters in my life. People risk their lives for money, which turns out to be no solution,” said South Korean fan Lee Ji-Hyeon.